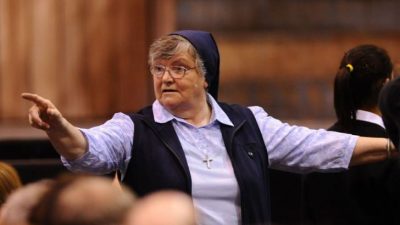 We’ve seen a lot of criticism of the Catholic School system in the press in recent weeks. Quite a lot of commentators are making presumptions about what goes on in Catholic schools and how students there feel about the Catholic ethos. I’m fresh out of a Catholic School – Holy Rosary College – in East Galway, and my experience and my friends’ experiences were predominantly positive.

‘Catholic ethos’ is a phrase which we’re all familiar with. It was couched within the mission statement amongst the anti-bullying sentiments, the academic focus and the respect. Throughout my education I have sat in class beside Muslims, Hindus, Protestants, atheists and even Satanists.

I sat an exam in Religion in Junior Certificate, I really disliked the subject but scored high in the exam. Religion, as an exam subject, was compulsory. It was a study of world religions. Beliefs weren’t ‘shoved down our throats’ in religion class. We had to learn material and regurgitate it in the exam just like all the other subjects.

During Leaving Cert I didn’t take religion as an exam subject, nobody in my year did. We had three religion classes a week and we lived for them. We longed for that class where the teacher would tell us to relax and take a deep breath. Where we could discuss and debate the hot topics: euthanasia, abortion, the death penalty, gay marriage and the existence of God. We the students yearned for nothing more than a good fiery debate!

Students who didn’t study religion (by written request from their parents) were facilitated. Non-Catholics used religion as a study class – it didn’t work. The people who had maths books open in front of them inevitably found themselves asking questions, making comments and getting involved in the conversation. If someone at that time were to say to us that religion was no longer to be taught in schools, I honestly think we’d all have cried!

One particular priest, a lovely man, since deceased, loved the chat, farming and the weather. He was known to keep students chatting for up to a half an hour and we all wanted to go to Confession to him: “The soundest priest you’d ever meet!”

We had a nun who had an office in the school, a sacred space with a candle, statues, notice board and Holy water. Many times, students rushing into exams soaked themselves in Holy water and could be seen unashamedly blessing themselves.

This nun – Sr Assumpta – was, by all accounts, a hero. She was funny and she was loveable. She hugged us and cried with us if we were upset – a real grandmother to the entire school. She made a speech on the intercom each day, telling us of how much God loved us and assured us of her prayers.

Those nuns – The Sisters of the Christian Retreat – had founded that school fifty years earlier and the first principal of the school – Sr Dympna Stack – remains a regular visitor despite her being in her late 80s. She loves catching up with students and staff. I think we ought to express gratitude to the various religious orders for their contribution to education on this island, rather than remain complicit spectators of this constant criticism by some journalists.

Since graduating from the school I have returned to visit the nuns on many occasions. On a recent visit I asked Sr Dympna about her life; as she boiled the kettle to make me tea she began to share with me the hardships she faced when she first arrived in this rural Galway town under the instruction to start a co-educational school here: “I left England in 1965, upset, grieving and desolate like the two disciples on the road to Emmaus.”

Sr Dympna says that her father died just prior to her being assigned to Galway. “I never had a chance to grieve properly, and for that reason, throughout my career in teaching, I felt it very important that students who endured tragedy in life were given time to grieve and process their loss.”

These beautiful sisters are praying for everyone, spreading the message that God loves everyone, promoting positive mental health and contributing hugely to the homely and welcoming atmosphere of the school. What, of this, warrants such public outrage and criticism on social media?

Religious education and indeed spiritual formation are very important in life. We learned about different faiths, we learned coping mechanisms for life, we learned about dignity and respect. We, as a country, given our past wars, should treasure and value religious education. The promotion of ecumenism is pivotal in ensuring religious tolerance. Ecumenism only works when we have a knowledge and understanding of other world religions. I firmly believe that if religion were to be struck off the syllabus we would see a sharp rise in instances of bigotry and religious intolerance.

We were a rural, academic, public, Catholic school. We were a community made up of people of all different faiths but on graduation day, there was a scramble for selfies with our favourite nun!