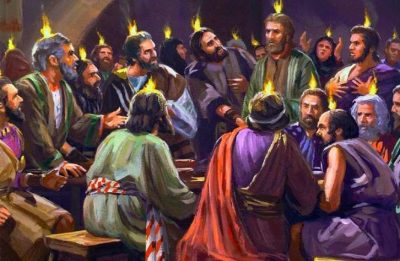 Pentecost lands on the seventh Sunday after Easter. This day celebrates the day where the holy spirit appeared to the disciples giving them the power to speak in tongues and instructed them to spread the word of the Lord throughout the land.

Note: The term “Speaking in tongues” meant that when the disciples spoke all people heard their voice in their own native languages. This gave the disciples the ability to be able to spread the word of God throughout the land to all people and nations without language barrier or restrictions.

Below is a link to guided meditation session based on the Pentecost (Acts 2:1-9) where the holy spirit appeared to the disciples giving them the power to speak in tongues and instructed them to spread the word of the Lord throughout the land.

The Holy Spirit Comes at Pentecost

2 When the day of Pentecost came, they were all together in one place.2 Suddenly a sound like the blowing of a violent wind came from heaven and filled the whole house where they were sitting. 3 They saw what seemed to be tongues of fire that separated and came to rest on each of them. 4 All of them were filled with the Holy Spirit and began to speak in other tongues as the Spirit enabled them.

5 Now there were staying in Jerusalem God-fearing Jews from every nation under heaven. 6 When they heard this sound, a crowd came together in bewilderment, because each one heard their own language being spoken. 7 Utterly amazed, they asked: “Aren’t all these who are speaking Galileans? 8 Then how is it that each of us hears them in our native language? 9 Parthians, Medes and Elamites; residents of Mesopotamia, Judea and Cappadocia, Pontus and Asia.

Concordia Publishing House video which tells the story of Penecost