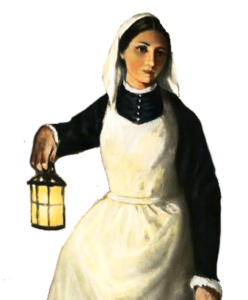 Presentation Sisters and friends of Nano Nagle, all over the world, celebrate the Feast of the Presentation of Mary in the Temple on the 21st November each year. 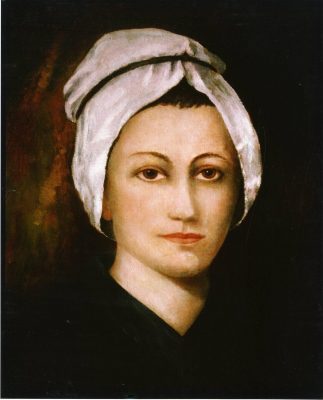 Nano Nagle wanted to help the poor she saw around her in Cork. Determined to help to educate them, both to improve their lives and to deepen their faith, in spite of the dangers she faced because of the Penal Laws, she opened her first school in 1754 with an enrollment of thirty-five girls in a two-room cabin.

Nano taught the children during the day and visited and nursed the sick by night. As a result, she became known in Cork as the “Lady with the Lantern”.

Believing that this work must be continued after her death, Nano founded the congregation now known as the Presentation Sisters in 1775.

Since then the Presentation Sisters have educated young people and cared for the sick and the poor all over the world. 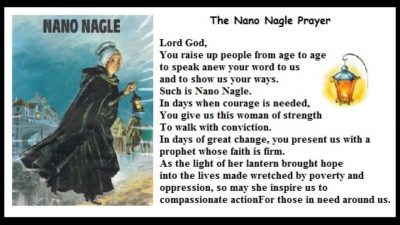 An Introduction to Nano Nagle and her Work

Nano (full name Honora) Nagle was born in Ballygriffin, County Cork, Ireland in 1718. This was the period in Irish history when the English had imposed the oppressive Penal Laws, which severely limited the Irish people. The Irish were denied access economically, politically, socially, and educationally to the rights and means that would have raised them from the imposed poverty and oppression. It was a crime of treason (punishable by death) to educate the Irish and it was forbidden to practice the Roman Catholic faith.

Because of her family’s position and wealth, Nano was sent to be educated in the Irish community then living in Paris.

According to Sister Rose Forest, PBVM, one biographer of Nano, her “stay in the midst of Irish Parisian society was brief, but during this time an incident took place which has become a classic episode in the Presentation story. One morning the charming, wealthy, and beautiful Miss Nagle…was returning from an all-night ball. As her carriage rattled over the cobblestones of a silent street, she saw a small group of poor working people waiting in front a church…for the door to open for early Mass. The contrast between their useful lives and her own empty one devoted to pleasure made a lasting impression on the girl of twenty-two”.

Returning to Ireland, other events lead Nano to consider a way that she could help the poor she saw everyday in Cork and on the family estate. Distressed by the ignorance of the Irish in both faith and academics, she opened her first school in 1754 with an enrollment of thirty-five girls in a two-room cabin. This began her great work of education and as some historians have noted, her important work in saving the Irish culture.

Without regard for her own safety, she selflessly educated the children during the day and visited and nursed the sick by night. As a result, she became known in Cork as the Lady with the Lantern, the symbol of the Sisters of the Presentation worldwide. Today the people of Ireland, especially in Cork, who attribute their freedom to her, revere her.

Eventually, realizing the need for a group to continue her work after her death, Nano founded the Sisters of the Presentation on December 24, 1775.

Nano died from tuberculosis, Monday, April 26, 1784. According to Sister Rose’s account, “On her deathbed Mother Nagle gave to her daughters the following injuction: ‘Love one another as you have hitherto done.’ As her legacy she bequeathed to them the treasure which she prized above all the wealth of the earth – the love of the poor of Jesus Christ. She bade her Sisters ‘Spend yourself for the poor.'”

In the years since Nano’s death, the Sisters of the Presentation have carried her spirit around the world in a variety of ministries.

Pope Francis has promoted Nano Nagle, the founder of the Presentation Sisters, on the ladder to sainthood. The Vatican’s announcement said the Pontiff had bestowed the title “Venerable” on the 18th century Cork woman. She had already been declared a Servant of God in 1994, a move that placed her on the first of four steps to canonisation.

Nano Nagle was born in 1718 to wealthy parents in Balgriffin, Co Cork, and was educated in Paris. Aged 36, distressed by the plight of the poor, she founded her first school in a two-room cabin in Cove Lane in Cork city. Two decades later, in 1775, she founded the Presentation Sisters with a mission to bring the gospel message to people on the margins of society.

The congregation founded hundreds of schools here and around the world. Its leadership team is based in Monastrevin, Co Kildare, from where it oversees the work of 1,200 sisters worldwide – 650 of them in Ireland.

In a statement the congregation’s leaders expressed their delight with the pope’s decision. Head of the Leadership Team Sister Mary Deane said that by proclaiming Nano Nagle “Venerable”, the Universal Catholic Church had recognised her as a woman of faith, hope, and heroic virtue whose vision and work transformed the lives of very many. She added that for the Order’s Sisters, associates, and for the friends of Nano throughout the world, the Venerable Nano had been, and continues to be, a source of inspiration and challenge as they respond to the needs of today in fidelity to the gospel and in her spirit. Sr Mary also announced that a celebratory mass to mark the announcement will take place in Cork next month along with a series of smaller events across Ireland and in the congregation’s areas across the world

After the South Presentation Convent school closure in 2006 most of the buildings, some over 200 years old, sat empty with just a few resident sisters to maintain them.The Presentation Sisters decided to act, just as their foundress had done nearly two hundred and fifty years before. They set up a company, appointed a voluntary board, and put in place plans to redevelop ‘South Pres’ as a special place for the people of Cork City.

The heritage buildings have been lovingly regenerated, they now house educational charities and rooms are also available to let by community groups, charities and local businesses. The chapel has been turned into a heritage centre that engagingly tells the story of Nano Nagle and the city in which she worked to educate and care for the poor. It allows the visitor to explore the incredible spread of the Presentation Order, the changing lives of the sisters who have dedicated their lives to that order and the remarkable work they still carry out as educationalists and campaigners for social justice. Click the link to learn more about the Nano Nagle Place Cork.

An Introduction to Nano Nagle and her Work