The Roman Martyrology commemorates two martyrs at Valentine (or Valentinus) on February 14 and there is some suggestion that both were beheaded on the Flaminian Way – one at Rome, the other at Terni which is some 60 miles from Rome. Valentine of Rome was a priest who is said to have died about 269 during the persecution of Claudius the Goth (or Claudius 11 Gothicus). The other Valentinus was allegedly Bishop of Terni, and his death is attested to in the Martyrology of St. Jerome. Whether there were actually one or two Valentines is disputed. One possibility is that two cults – one based in Rome, the other in Terni – may have sprung up to the same martyr and that in the mists of time his true identity became confused.

In ancient Rome, February 14th was a holiday to honour Juno ­- Queen of the Roman Gods and Goddesses. The Romans also knew her as the Goddess of women and marriage. The following day, February 15th, began the Feast of Lupercalia. At the time the lives of young men and girls were strictly separate. However, one of the customs of young people was “name drawing.” On the eve of the festival Lupercalia, the names of Roman girls were written on slips of paper and placed in jars. Each young man would draw a girl’s name from them and they would then be partners for the duration of the festival. Sometimes the pairing of the children lasted an entire year, and often they would fall in love and later marry.

Under the rule of Emperor Claudius II, Rome was involved in many bloody and unpopular campaigns. Claudius the Cruel was having a difficult time getting soldiers to join his military leagues. He believed the reason was that Roman men did not want to leave their beloved families. As a result, Claudius cancelled all marriages and engagements in Rome. Claudius had also ordered all Romans to worship the religion’s idols, and he had made it a crime punishable by death to associate with Christians. But Valentinus was dedicated to Christ, and not even the threat of death could keep him from practicing his beliefs. Valentine and Saint Marius aided the Christian martyrs and secretly married couples, and for this kind deed Valentine was apprehended and dragged before the Prefect of Rome, who con­demned him to be beaten to death with clubs and to have his head cut off. He suffered martyrdom on the 14th day of February, in either 269 or 270.

This is one legend surrounding Valentine’s martyrdom. The second is that during the last weeks of his life a remarkable thing happened. One day a jailer for the Emperor of Rome knocked at Valentine’s door clutching his blind daughter in his arms. He had learned of Valentine’s medical and spiritual healing abilities, and appealed to Valentine to treat his daughter’s blindness. She had been blind since birth. Valentine knew that her condition would be difficult to treat but he gave the man his word that he would do his best. The little girl was examined, given an ointment for her eyes and a series of re-visits were scheduled.

Seeing that he was a man of learning, the jailer asked whether his daughter, Julia, might also be brought to Valentine for lessons. Julia was a pretty young girl with a quick mind. Valentine read stories of Rome’s history to her. He described the world of nature to her. He taught her arithmetic and told her about God. She saw the world through his eyes, trusted in his wisdom, and found comfort in his quiet strength.

One day she asked if God really existed and Valentine assured her that He did. She went on to tell him how she prayed morning and night that she might be able to see and Valentine told her that whatever happened would be God’s will and would be for the best. They sat and prayed together for a while.

Several weeks passed and the girl’s sight was not restored. Yet the man and his daughter never wavered in their faith and returned each week. Then one day, Valentine received a visit from the Roman soldiers who arrested him and they now destroyed his medicines and admonished him for his religious beliefs. When the little girl’s father learned of his arrest and imprisonment, he wanted to intervene but there was noth­ing he could do.

On the eve of his death, Valentine wrote a last note to Julia – know­ing his execution was imminent. Valentine asked the jailer for paper, pen and ink. He quickly jotted a farewell note and handed it to the jailer to give to his blind daughter. He urged her to stay close to God, and he signed it “From your Valentine.” His sentence was carried out the next day,’ February 14, 269 A.D., near a gate that was later named Porta Valentini (now Porta del Popolo, Rome) in his memory.

When the jailer went home, he was greeted by his little girl. The lit­tle girl opened the note and discovered a yellow crocus inside. The message said, “From your Valentine.” As the little girl looked down upon the crocus that spilled into her palm she saw brilliant colours for the first time in her life! The girl’s eyesight had been restored.

Valentine was buried at what is now the Church of Praxedes in Rome, near the cemetery of St Hippolytus. It is said that Julia herself planted a pink-blossomed almond tree near his grave. Today, the almond tree remains a symbol of abiding love and friendship.

In 496 Pope Gelasius I named February 14 as Saint Valentine’s Day. On each Valentine’s Day, messages of affection, love and devotion are still exchanged around the world. This could be because of Valentine’s work in marrying couples against the law, or because of the miracle worked for Julia and the message he left. Others believe that peo­ple in medieval times sent love notes during February because it was seen as the mating season of birds, and that Valentine’s feast falling in the middle of the month became the principle day for this.

Taken from the Archdiocese of Dublin 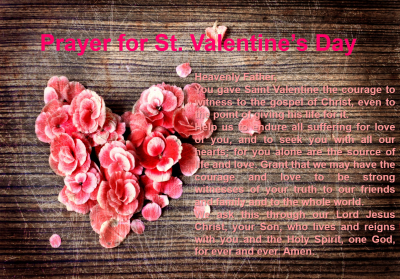 Perhaps you may wish to spend some time exploring St. Valentine’s Day with your students before midterm begins. The above slide was taken from a Powerpoint presentation on the life of St. Valentine taken from the Archdiocese of Dublin resources page.

Below are a number of short videos which are hosted on Igniter Media and Catholic.org which use love as their theme.

A Pslam of Love