Congregation of Sisters of Mercy

History of the Mercy Congregation

The Sisters of Mercy were founded by Dublin woman Catherine McAuley in Lower Baggot St. in December 1831 – the same year as the setting up of the Board for the superintendence of a System of National Education and three years after the passing of the Catholic Emancipation Act. The first of three children, Catherine had been born, in 1778 in Stormanstown House in north Co Dublin four years before the Catholic Relief Act of 1782. The Ireland of Catherine’s childhood was one where Catholics suffered hardship, poverty, deprivation and proselytisation.

Unusual for the time, Catherine’s father James McAuley, even-though a Catholic, was a wealthy businessman and builder with a strong faith and commitment to the poor around him. His living out of the Christian values made a lasting impression on her. However, by the time Catherine was twenty years old she had lost both parents and the family was reduced to living on the charity of relatives and friends. In 1803 Catherine welcomed an invitation from the childless Quaker couple, Catherine and William Callaghan of Coolock, to live with them as companion and helper to Mrs Callaghan. The couple had just returned from India.

In the Callaghan household there was an atmosphere of tolerance and love of neighbour that found its expression in care for the poor, in service and in education. Catherine was free to practice her religion while the Callaghans practised theirs.

On the deaths of Catherine and William Callaghan (both of them Catholics by then) in 1819 and 1822 respectively, Catherine McAuley became the unconditional heiress to the Callaghan fortune that she used ‘to build a house in Baggot St. where the children of the poor would be educated’. She taught needlework and handcrafts and as the pupils became more skilled the craftwork was sold and the proceeds used to meet their needs and those of their families.

She was convinced that education was the only answer to the ignorance and enslavement that was rampant among the poor. This was a conviction shared by Dr. Daniel Murray who became Archbishop of Dublin in 1823 in a decade of religious revival that saw the progress of Daniel O’Connell towards Catholic emancipation and the introduction of the Loreto Sisters and the Irish Sisters of Charity to Dublin specifically to meet the need for education of the young. The Presentation Sisters were already established in George’s Hill.

Conscious of the concerns of the clergy and the Roman Catholic hierarchy about proselytisation in the schools supported by the Kildare Place Society and their demand for an education system that would protect the rights of Catholic children, Catherine took time out to go to France to study the education system there.

In time, other like-minded women joined Catherine McAuley in her work of educating the poor and took up residence in the house on Baggot St. which was opened on 24 September 1827 and called the House of Mercy.

It was her intention to establish a ‘pious house’ but by 1830, Archbishop Murray made it clear that ‘some of their number ‘ should serve a novitiate and so Catherine herself, now fifty two years old, along with two companions, went to the Presentation Convent at George’s Hill to begin their novitiate. They were professed on 12 December 1831 and returned to the House of Mercy that same day, the foundation day of the congregation.

It would seem that the clergy could neither understand nor accept a group of women who were not religious, engaged in the type of work they observed in the House of Mercy and they had threatened to close it down. Catherine McAuley was a woman of faith, conviction, generosity and a pragmatism that called for extraordinary courage: if becoming a religious was what it took to meet the needs of the poor then that was what she would do. She was very much a woman who read the signs of the times and made a very practical response. In turn she was responded to by the generosity of many young women who came to join her in the Mercy congregation and the generosity of friends and benefactors who made the work possible.

In the ten years she lived as a religious she established twelve houses of the congregation in Ireland and two in England and had plans to go to Newfoundland. After her death the congregation continued to grow and expand. Every Mercy foundation was made in response to a request and almost without exception, the first task undertaken was that of teaching.

Catherine McAuley generated in her sisters a deep concern for the needs of people around them. Referring to this concern, Article 43 of the revised Constitutions of the Sisters of Mercy of Ireland (1985) states: 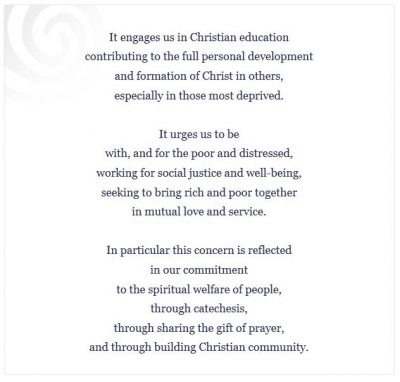 Inspired by the vision of Catherine McAuley, Mercy education is committed to holistic development and to the achievement of the full potential of each student, particularly those who are disadvantaged or marginalized. It is a process informed and influenced by the teaching and example of Jesus Christ and is conducted in an atmosphere of care, respect and joy. Mercy education is committed to on-going whole-school development in collaboration and partnership with the Board of Management, Staff, Parents and the wider community. (Mercy Philosophy of Education 1996)