History of the Presentation Congregation

Nano Nagle founded the Institute of the Charitable Instruction of the Sacred Heart of Jesus, on Christmas Eve, 1775, in Cork, Ireland. This foundation was the fruit of more than twenty years of loving service to the poor of that city where she had founded her first school as a lay woman, in 1754.

The purpose of the foundation was to ensure the continuation and extension of the work of Nano and her companions for the education of the poor, the evangelisation of her people, and the relief of those exploited by the Penal Laws.

Nano Nagle was born into a wealthy Catholic family and so had the advantage of a Catholic education in her own home and in France. She was assured also of a comfortable future. But Nano heard the call of God in the cry of the poor, condemned as they were to ignorance, superstition and loss of faith.

Conscious of her own weakness, she resisted the call, but, after much suffering and heart-searching, Nano did respond. From that moment her response was lived out in her wholehearted dedication to the cause of Catholic education and to the relief of misery and social ills wherever she discovered them. At great personal and family risk, Nano began her mission among the poor in the “little school” in Cove Lane, Cork in 1754. Within a short period she had schools in several parts of the city. While her immediate mission was confined to her native city, Nano’s understanding of mission was universal. She recognised the potential of the poor and of youth to minister to one another.

Urged on by her faith in her own mission and by her desire to give stability to her works, Nano eventually founded a religious society in 1775 – the Sisters of the Charitable Instruction of the Sacred Heart of Jesus. At the age of sixty-six, surrounded by her small community of three Sisters, Nano Nagle died in Cork in 1784.

It was not until 1791 that Pope Pius VI granted the Institute qualified papal approval. Because of the nature of their apostolate, the Sisters took simple vows and were not bound to enclosure. However, difficult historical and social circumstances of the period caused significant changes in the Institute’s manner of life. In 1805, Pope Pius VII, at the request of the congregation, approved new constitutions that incorporated the profession of solemn vows and a rule of enclosure. At the same time the Institute was given its official title: The Congregation of the Presentation of the Blessed Virgin Mary.

From small beginnings in Cork city, the Congregation spread to many towns in Ireland and thence to several parts of the world. Historical and legal factors caused the various houses of the Congregation to develop as autonomous units, but the particular charism of the foundress living on in persons and communities has always been a source of life and unity.

In light of the Second Vatican Council, many autonomous groups of Presentation Sisters came together into The Union of the Sisters of the Presentation of the Blessed Virgin Mary in 1976. A new Constitution was formally adopted in 1986.

Nano responded to the needs of her time and developed an educational curriculum suitable to her students. To-day, Nano Nagle is regarded as one of the great pioneers of Catholic education. Her work laid the foundation for a voluntary school system in Ireland. Her spirit and tradition inspire the Presentation Philosophy of Education.

Presentation Education draws inspiration from and is guided by the Gospel of Jesus Christ, the spirit and life of Nano Nagle, the teachings of the Catholic Church and our Constitutions:

The centrality of Gospel values to a holistic education process is re-affirmed many times by the Church. 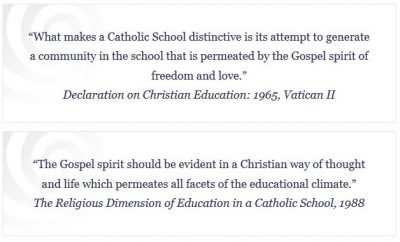