The convent in Portlaoise was established in 1824 in the old Infirmary. The annals record that on the first day, 216 girls flocked to the school.

Some of they were 14 years old and none were very young in the beginning-not until an infant school was built for them. Daniel O’Connell befriended the convent and gave the nuns legal advice to secure their property.

The convent was erected in 1886-this was also the school. In 1932 the school fronting the road at Church Avenue was built, this time with some government assistance-this is know as the Sacred Heart School.

The second primary school, Scoil Mhuire was built in 1955 and the secondary, Scoil Chríost Rí, was finished in 1968. The first Board of Management was appointed in 1989.

The school has a strong academic history and excels in Basketball and Athletics. 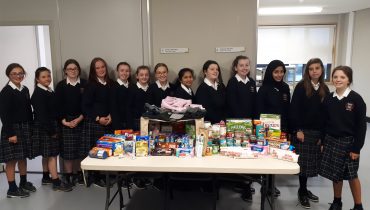 The Transition Year students of Scoil Chriost Ri, Portlaoise had a busy few days recently as they brought their…

Two All Ireland Titles in One Day for Scoil Chríost Rí, Portlaoise

Wednesday the 7th of May was an eventful day for Scoil Chriost Rí in Portlaoise. While many schools…