Mercy College is a voluntary, Catholic secondary school under the trusteeship of CEIST, and in the tradition of the sisters of Mercy. We endeavour to build a Christian community, in an atmosphere of respect for the dignity of all. With the co-operation of parents, students and the community, we the staff will work to foster the academic and personal development of the students by creating a caring, safe and ordered environment where all are encouraged to become responsible persons striving to reach their full potential.

2nd September 1963
A Secondary School was opened in the lower part of the Convent of Mercy, once the home of Catherine McAuley. It was called Virgo Clemens College. Eighteen pupils were enrolled then.

1964
The following year the number of students increased to 52. Arrangements to build a new Secondary School were begun in 1964.

1965
In September 1965 two pre-fabricated rooms and a cloakroom were erected near the Convent for the use of the Secondary School. Forty four new pupils were admitted and work began on the extended school on 8th September 1965.

1966
Fourteen pupils of the first class formed in Virgo Clemens did the Intermediate Certificate Examination. The convent parlour was the classroom for the first Leaving Certificate pupils in Sept. 1966. Fifty seven new pupils had been enrolled that year making a total of 140.

1967
Having bulldozed the old stables, farmyard and part of the surrounds, the foundation for the new Virgo Clemens was cut on the feast of the Sacred Heart, June 9th. 1967 . This same year, Mr. O’Malley, Minister for Education, launched his free post – primary scheme. As a result, 90 new pupils were admitted. Fortunately, the men worked very hard and three rooms, the first of the new College, were in readiness for the 7th. Sept. 1967, to accommodate the newly enrolled. The total number of pupils 1967 – ’68 was 220.

1968
By September a second block of Virgo Clemens School was nearing completion. Some classes moved into it early in September and the whole school was ready after the Christmas holidays, January 1969.

1969
Before this second block could be erected, the old coach house and other old buildings on the Malahide Rd. side of the College, had to be bulldozed. Also the high walled garden with its flower and trained apple or pear tree lined walks, its glasshouses, where vines were cultivated and its many vegetable plots had to be levelled. Trees had to be cut down as well and by degrees the grounds had to be attended to when the new building was erected.

1971
A Sport’s pavilion was erected in 1971. Tennis courts were laid in concrete and fenced in with a gate capable of being locked. Concrete paths were laid from the main entrance to the school and around the building and one badly needed between the College and the Convent was laid then too. 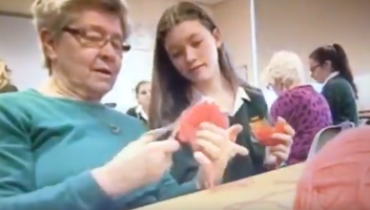 A New Look at Coolock House 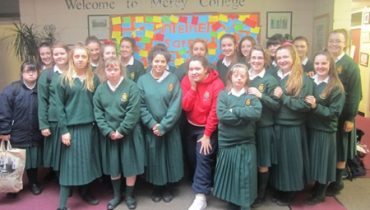