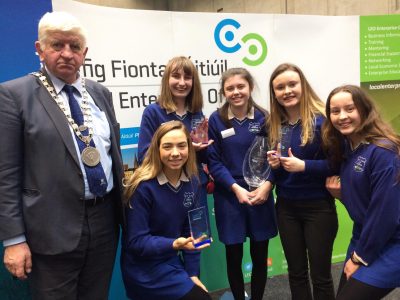 This year Ard Scoil na nDeise was lucky enough to have four mini enterprises attending the Student Enterprise Programme County Final. The Student Enterprise Programme is an initiative run by the Network of Local Enterprise Offices of Ireland. It is Ireland’s largest and most successful student enterprise programme with over 23,000 second level students taking part each year. It is an excellent programme which enhances creativity, improves communication skills and encourages students to consider self-employment as a career choice.

On Tuesday, 5th March, Elia Tutty, Ella Harrington, Martha Ryan, Lauren Douris, Caoimhe Keane, Lucia Sanchez and Clara Rabasa from Transition year headed to the WIT Arena to represent Ard Scoil na nDéise in the County Final. The excitement for this competition was building as the winner of this would go on to represent Waterford at a National level in Croke Park this May.

Once everyone had their stand set up and products or services on display, the judging began. It consisted of three different five minute interviews. The girls gained great experience from these interviews as they had to tell the judges what their enterprise was about. Showcasing their enterprises by using visual displays, demonstrations and technology the girls did a fantastic job and really impressed the judges at the competition.

The winner of the competition was announced at 2pm. Overall, it was a fantastic day for the Ard Scoil as we managed to take home three out of the nine awards, including First Place!

Finally, we are delighted to say that Caoimhe Keane and Lauren Douris of ‘Hidden Access’ won the overall first prize in the competition and will go on to represent Waterford at the National Final in May. This is a huge achievement for the girls as they worked so hard on this project. The girls proved to be very successful in making a portable wheelchair ramp, which certainly impressed the judges! We are so proud of them for winning the competition and we wish them all the best for the future with this enterprise.

We would like to congratulate all the girls on their fantastic achievements and for advancing so far in the competition. We would also like to thank their excellent enterprise teachers Ms Gleeson, Ms Foley and Ms Cleary for all their hard work in preparing the girls for the competition.

On Thursday, April 28th we went orienteering for the second time this year. We were all really excited when we headed off in the bus at 9 a.m. as we had enjoyed it so much the last time. This time we went to Woodstock Gardens in Inistioge, Co. Kilkenny. When we arrived we had a quick lunch break before getting our dibbers and maps and starting the course. Unlike the last time, we all had the same map and a lot of us ended up working in bigger groups. Woodstock Gardens was such a lovely place and the weather was fantastic which made the experience all the more enjoyable. We all found that it was much easier this time, after our previous experience, and most of us finished the course in time. There were a few stations that were hard to find but we persevered and worked together to figure it out and it was such a great achievement to finish it, especially for those of us who struggled to find more than half last time!! We were absolutely wrecked coming home after running around all day but it was a fantastic day and we made lots of memories. Thanks to Ms Pickering, Ms Rochford and Ms Troy for organising the trip and helping us to prepare! 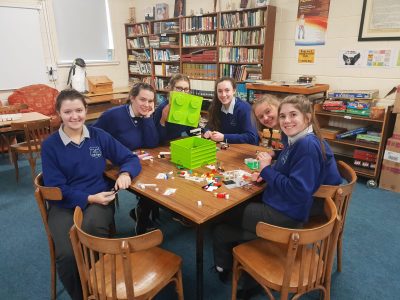 Last week saw the first ever Engineers Week in Ard Scoil na nDéise. We would like to thank Ms. Troy for coordinating lots of activities during the week to highlight the importance of encouraging women to get involved in careers in engineering. During the week we had lots of activities including daily puzzles, table quizzes on STEM (Science, Technology, Engineering & Maths), screenings of documentaries on women in STEM, and a virtual tour of a power plant. A big hit during the week was our very own LEGO LAND where students engaged in challenges to build things out of LEGO! 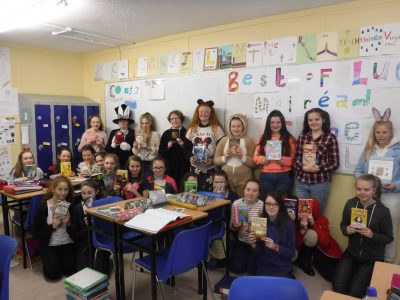 Thursday, 7th March was World Book Day and the English department in Ard Scoil na nDéise organised lots of fun activities to mark the day and to promote reading in our school. On the day First Year students came to school dressed as a character from their favourite novel. We were so impressed by the variety of costumes and the big effort that they put into their costumes!! We were also very impressed to see that the English teachers embraced the challenge too and also dressed up on the day!! As well as the fancy dress part of World Book Day, we also enjoyed a table quiz for First Years, Drop Everything and Read across English classes, and Transition Years spent time researching and doing projects on their favourite authors. World Book day was great fun and we are already looking forward to seeing what the English department has in store for us next year!!

The Irish Life All Ireland Schools Cross Country Championships were held on Saturday, March 9th at Clongowes Wood College in Kildare. It was an extremely flat course compared to what the girls were used to at the East Munsters and the Munsters. Ard Scoil na nDéise was well represented by three teams; Junior, Intermediate and Senior.

The Junior team got the day underway for the Ard Scoil. Caoimhe Prendergast led the team home in 36th place followed by Eve Dwyer 54th, Millie Lucey 59th, Aoibh Murphy 71st, and Mairead Hickey 75th out of 90 athletes. Qualifying for the All Irelands is a huge achievement for this team as they didn’t even qualify out of the East Munsters last year. Well done girls!!

The next team may be small in numbers but are no means scared of a challenge. Intermediate is a tough category and all three of these girls are eligible to compete in Intermediate again next year. Sarah Nyhan led the team home in 34th place followed by Anna Hickey in 49th and Emma Hickey in 56th. Well done girls, a great achievement!

Last but definitely by no means least, the Senior girls team were up. Double European Champion Sarah Healy led the race from the gun and won her 6th All Ireland Schools title. Lucy Holmes and the Munster Champion Laura Nicholson led the tracing pack. It was certainly a battle between Lucy and Laura for 2nd place. When they took the last bend they were neck and neck and Lucy stepped it up a gear and found that final bit of energy to sprint away and claim 2nd individual prize. What an achievement! Lucy’s fellow team mates; Mary- Kate Prendergast, Kate Hickey and Sinead O’Brien could hear over the loud speaker that Lucy had just claimed 2nd place and knew that a team prize was achievable for the Ard Scoil and all three girls found that last bit of fight in them. The Senior girls results were announced and Ard Scoil na nDéise claimed 3rd team prize only 3 points behind Ballmena Academy. Congratulations Lucy, Mary-Kate, Kate and Sinead on another successful Cross Country season. Well done too to their trainer Ms. Flavin who works so hard to support and encourage the girls throughout the year!

Well done to our talented Transition Year students who exhibited their work at the Artifice Exhibition at Lismore Castle Arts recently. The theme this year was ‘Oral Histories’. It was a challenging theme and a lot of innovation and ingenuity was required to translate the theme into finished art pieces. Thank you to art teacher Ms. Foley for supporting and encouraging the students in this challenging endeavour. 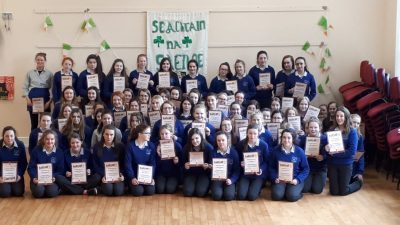 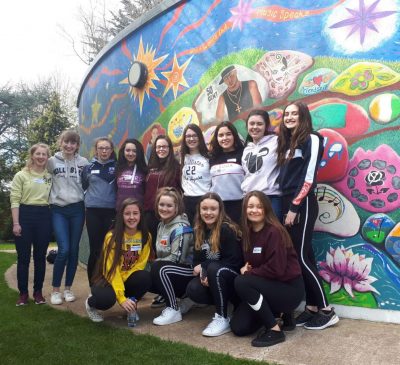 Our newly appointed Fifth Year Mentors at their training day in Cork recently.

On Monday, March 25th, following our interviews and selection, a group of us who have been chosen to be Cairde Girls next year attended a leadership training day in Cork. We left the school with Ms Clancy slightly later than expected and arrived at Scala, the training centre in Cork at about half pat ten. We were greeted by Brian and Michael, who would be doing our morning session with us. When we arrived, they explained to us what Scala was and told us about how the day would go. Then, they showed us some games to play with the incoming first years to help them to bond with each other. In the morning session we also learned listening skills. After break, we played some more games to help us bond and teach us different skills to do with leadership. For our second break, we went for a look at the mural and beautiful gardens around the building. When we got back, they taught us about conflict resolution and we got to do a walking debate with another leader named Megan. At the end of the day, they gave us booklets with some tips and ideas for next year. We all had a great time and bonded a lot over the course of the day and we’re looking forward to putting all the things we learned to use next year. 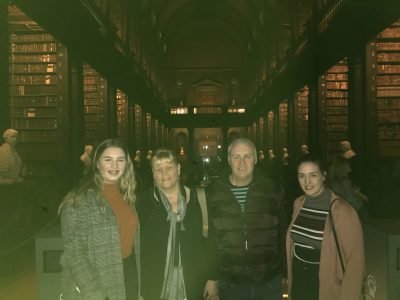 Over Christmas I wrote an essay that I later entered into the Law Society competition in Trinity College. My essay came under the heading of “a law case you have read/heard about”. I choose to write about the “Right to be forgotten”. My essay was about two criminals who asked to have online information about their case removed after they had served their time. Late last month I got an email to say that I had won the secondary schools category in the competition. The award ceremony was held in the Long Room Library in Trinity College on the 25th of March. I was joined that night by lawyers, junior editors and many college lecturers. There were five different awards presented on the night. After I collected my award I was greeted by two junior editors who had read my piece and were very impressed by it. My essay will be posted on the Trinity College Law Review (TCLR) online. 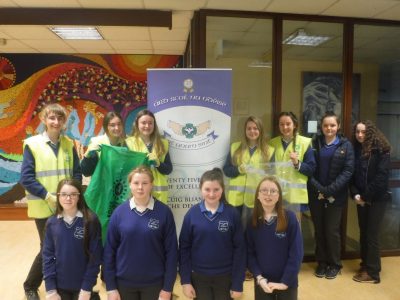 On the 2nd of April a group of students from the Green Schools Committee went on a litter pick, assisted by Dungarvan Council. The areas we found the most litter were the alleyways and footpaths around the town. The majority of litter consisted of cigarette butts. We also went down to the beach near the sports centre where we found a lot of litter, mainly plastic waste. We were delighted to be able to get involved in this work as part of our work on the Green Schools Committee.