The Munster Schools Cross Country Championships were held in Clarecastle on the 13th of February. Ard Scoil Na nDéise had 2 teams in action on the day in the Senior and Intermediate race.

First up were the intermediate girls, with Sarah Nyhan leading the Ard Scoil team to bronze medals. Sarah ran one of her best races to date, after the first lap she was in 8th position and managed to finish in 5th place overall. Also part of this team were Anna Hickey, Eve Dwyer, Caoimhe Prendergast, Emma Hickey and Millie Lucey. Well done girls you excelled on the day!

The most exciting race of the day came in the senior girls’ race as Lucy Holmes came with a late burst to pip Niamh O’Mahony from Tralee who led virtually all of the way around the two-lap 3000m race. Well done Lucy! Unfortunately the Senior team just missed out on 3rd team place by two points. Well done to Lucy, Mary-Kate Prendergast, Kate Hickey and Elia Tutty.

The All Ireland Schools Cross Country Championships will be held on the 7th of March in Santry Dublin, and we would like to wish Lucy and the Intermediate team the best of luck.

Huge congratulations to Lucy Holmes who competed in the All Ireland Schools Cross Country Championships in Santry on Saturday, 7th March and gained the coveted title of Senior Girls All Ireland Champion. We are so thrilled that Lucy achieved this accolade in her final year competing at this event. It marks the culmination of many years of hard work and commitment to training and competing. Well done too to the rest of the Ard Scoil na nDéise athletes who competed on the day. A full account of the day’s events will follow. Thank you as always to Ms. Flavin for her hard work and support of the athletics teams in Ard Scoil na nDéise. 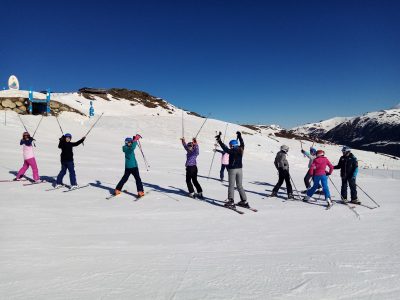 Our first week back after mid-term has been a busy one. Our ski trip to Andorra was a great success and we will be sharing photos and updates about this wonderful trip very soon. In the meantime everyone threw themselves into the first week of school with great enthusiasm and got involved in the multiple activities on offer throughout the course of the week.

On Monday, two groups of students travelled to Cork to present their projects for the Sustainable Energy Authority of Ireland ‘One Good Idea’ competition. Our first group ‘Travel Buddies’ talked about the importance of walking to school or carpooling when it is raining. Our second group looked at the importance of using renewable energy rather than fossil fuels. Well done to the girls for all their hard work preparing for the competition.

On Tuesday, two students from Ard Scoil na nDéise, Jennifer Cronnolly and Kate McKeon, along with Ms. Derval Lonergan had the opportunity to meet with members of the Supreme Court – Mr. Justice Mac Menamin, Ms Justice O’Malley, Mr Justice Charleton and Ms Justice Dunne at Waterford Institute of Technology (WIT). The event was organised by the Law Department at WIT in conjunction with the Office of the Chief Justice to mark the historic first sitting of the Supreme Court in the South East.

Wednesday was a very busy day as our Transition Year students took part in a hair care workshop and our Second Year students travelled to the Bord Gais Energy Theatre in Dublin to see a live performance of Blood Brothers to bring the text they are studying to life for them.

On Thursday our Transition Year students were busy again as they took part in an orienteering competition for the day. Thankfully they all made it back safe and sound!

We would also like to congratulate Katelyn McGovern who received an award at the Waterford Garda Community Youth Awards for her volunteer work with Dungarvan Surprise Surprise.

Thank you to the Transition Year students who ran a table quiz for First Years to mark World Book Day. It was a lovely bonding activity for our First Years as we marked World Book Day. We were impressed by their knowledge and we hope they will all continue to enjoy reading for pleasure.

On Thursday, 27th February, our year travelled to New Ross for an orienteering competition. The competition took place in JFK Forest and we were blessed with a lovely bright day with no rain. We were put into pairs and each pair was given a map and a dibber. The objective was to use the map and dibber to find the checkpoints around the map. There were a few other schools there also completing the course. When we reached the end of the course we found out the time it took each pair to navigate the course before setting off home after a long but enjoyable day. 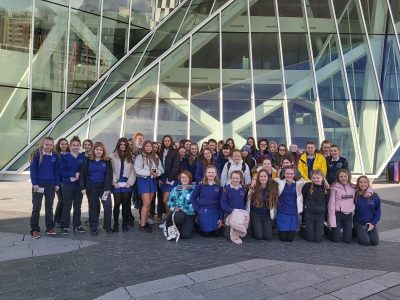 The musical tells the story of a woman named Mrs. Johnstone, who is pregnant with twins but can barely afford to raise her other seven children, so she gives one twin to Mrs. Lyons, a middle-class woman who can’t have children. The twins become best friends without realising they are brothers, but the difference between their social classes is obvious.

The acting was amazing and very realistic. It almost felt like we weren’t watching a play at all. Even though adults played the part of children, they acted exactly like seven year olds would, which was hilarious.

The costumes were fantastic. The different characters’ outfits showed everyone’s personality perfectly. The quality of their clothing also highlighted the differences in social class.

The set was brilliant too. It had little extra touches, such as graffiti on the walls which made the set look more realistic. The background changed depending on where the characters were and the transitioning of the set was perfectly smooth.

I really enjoyed watching this musical and would love to see it again. I would totally recommend it! I rate this musical 5 stars out of 5!

Keeley Flynn: One thing I enjoyed about this play was how they gave the narrator a role that I didn’t expect. While everything was happening on stage, he would be near the sides watching what was happening. This gave a sinister aspect to his role.

Ciara Lenane: I really enjoyed the play and I’m so happy that I got the chance to go. I never got to go to a theatre, let alone a musical. The experience was amazing. I especially enjoyed the music and singing. I would definitely go back and visit the theatre after this.

Recently we marked Engineers Week in Ard Scoil na nDéise. We would like to thank Ms. Troy for coordinating lots of activities during the week to highlight the importance of encouraging women to get involved in careers in engineering. During the week we had lots of activities including daily puzzles, displays on careers in STEM (Science, Technology, Engineering & Maths), and of course our very own LEGO LAND where students engaged in challenges to build things out of LEGO! It was a wonderful week and we look forward to marking it again next year.

We were delighted to see the amount of effort that had been put in by all of the teams and we were especially proud of their impressive stands at the regional final. It was also wonderful to see such a focus on reusable products and products that will make a positive impact on the environment. Well done to all involved and well done to Ms. Gleeson and Ms. Foley for all of their work mentoring the girls as they prepared for this event.

We recently celebrated Seachtain na Gaeilge in Ard Scoil na nDeise. It was a busy week full of fun activities and opportunities to speak Irish. We had everything from coffee mornings, to céilís, to table quizzes. There really was something for everyone during the week. It was great to see everyone getting stuck in and making a big effort to speak Irish and also to try their hand at the céilís. We had hoped to have some activities with the boys from CBS, including a joint Transition Year céilí. Unfortunately, in the interests of health and safety, that wasn’t to be this year but we look forward to reinstating this event next year. Well done to everyone who got involved this year and thank you to the Irish teachers for organising all the activities.