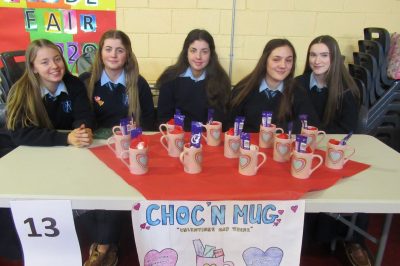 Second Years were up first against a very strong Castletroy team eventually losing out by 12 points, but playing excellently throughout.

ASM’s First Years started their first game for the school nervous, being down 10-4 after the first quarter. By quarter 3 they had relaxed and began to find their groove, keeping within 2 points of their opponents in the last 2 quarters, eventually winning out 30-18. The girls on both teams played well and had a brilliant attitude throughout.  Sincere thanks to Castletroy College for the excellent games and UL for the use of their facilities. 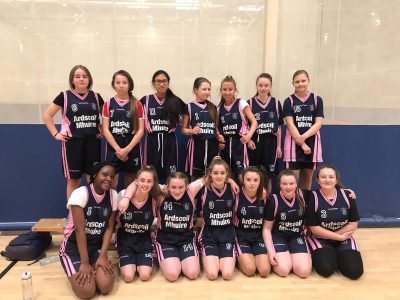 Thanks to Aaron Gillane (Limerick hurler) for coming in during February to talk to ASM’s school community about financial literacy and how to maintain a healthy relationship with money! This was part of Bank of Ireland’s Money Smarts programme and was highly effective in engaging students to think about their financial wellbeing! 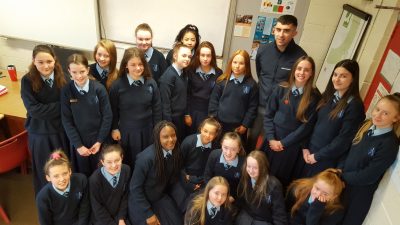 ASM’s TYs got the opportunity to soar as legal eagles during their Law Day with TY Ireland Law Modules! Not only did they learn about the ins and outs of the legal profession, but they also had the unique experience of participating in a mock trial!  The verdict was a talking point for the week and the whole experience created a genuine buzz for the upcoming five week Street Law programme! 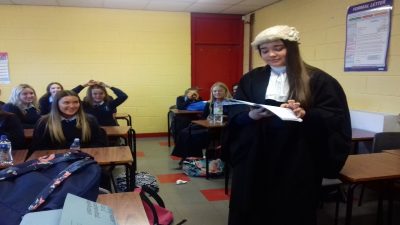 ‘ECONOMICS OF STAYING IN SCHOOL’ PROGRAMME

ASM’s 1 Eilish Business class took part in Junior Achievement Ireland’s five week ‘Economics of Staying in School’ programme with Marie Kissane from AIB. They looked at the types of careers they might be interested in, what salaries they could earn, how to budget on those salaries, and skills they might need to succeed. They finished up this week by doing mock interviews in the style of speed-dating before receiving their certificates! 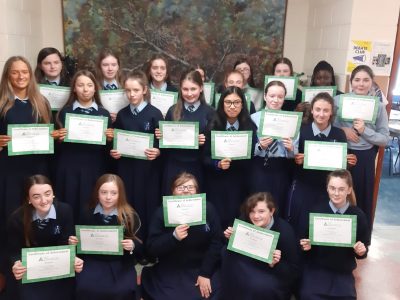 While most of ASM’s school community was served lovely pancakes from our canteen on Pancake Tuesday, the First and Second Year members of Fun Club cooked their own! They turned out delicious too!  Nutella was the preferred topping, but healthier options were also explored!

We’re so happy to see so many of our senior students taking time form a busy schedule of projects, study, and tasks to get involved in a bit of bowling and bonding with Fun Club!

Thanks to Colm, Theo, and Mark from Limerick IT’s Business Studies and Sports Management course for coaching our junior camogie team ahead of a schools’ blitz they’ve organised as part of their event planning module. A brilliant session that got the team pumped for the blitz in March! 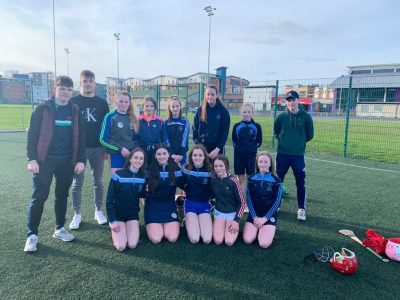 Congratulations to ASM Debate Club members Molly (c), Abbie, and Nicole on winning (by unanimous decision) their first League Phase debate of the Edmund Rice Cup Debate Competition against passionate opponents from Thomond Community College! They successfully proposed a controversial motion on animal testing.  All club members are busily preparing for their next debate, on security cameras in schools, which takes place in March! 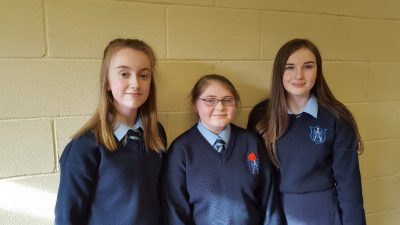 PERFORM FESTIVAL IN THE RDS

Students, representing all corners of ASM’s school community, had an amazing time at Perform Ireland’s Festival in The RDS!  They had the opportunity to participate in a range of dance, drama, and singing workshops with world-renowned pro instructors!  Many great ideas were brought back to ASM’s clubs! 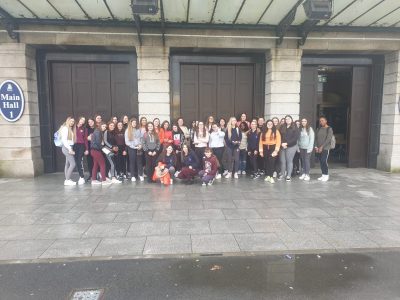 Putting their midterm break to good use, some of ASM’s TY students spent the week expanding their horizons by skiing in the Alps at the amazing Maria Alm Resort. Jugendgästehaus was their home away from home for the week. The staff kept them well fed for the long days on the slopes, with the girls particularly enjoyed the Austrian pancakes, a local specialty.

All of our students were first-time skiers, but with help of great instructors from Denmark; Si, Carl and Danish ‘Sean’; they demonstrated great progress throughout the week. By Day 3 they were already perfecting their turning, parallel skiing, and stopping! On the last day there were four brave ASM skiers who skied all the way down to the bottom of the mountain – a fantastic achievement!

It wasn’t all tough work on the slopes though. They enjoyed some great après ski activities which included a games’ night, bowling, a pizza party, and a ski show. The last après ski was a particular highlight. The girls enjoyed a sing-song (accompanied by gallons of hot chocolates), a snowball fight (with the students beating the teachers!), and a great evening sledging!

Thanks to our first ever ASM ski group for making us proud with how they represented our school community abroad! The positive attitude to skiing, the smiles on faces (even with early starts, a few falls on the slopes, and the pain of the ski boots) lit up the snowy slopes of the Maria Alm Resort!

A huge thank you is also due to Mr Cross, Ms O’Brien, Ms O’Connor, and Ms Shanahan, who worked so hard to make this such a memorable trip for the students! We are already looking forward to 2021!

GET GOING GET ROWING BLITZ IN UL

A great day in UL Sport Arena for ASM’s junior students participating in the Get Going Get Rowing Indoor Rowing Blitz! All had a great time, with First Years placing in all of their heats! 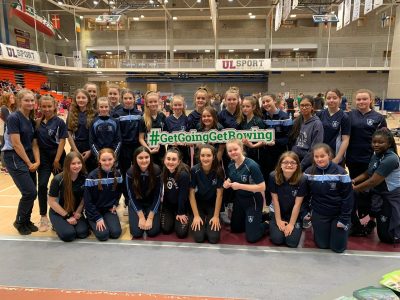 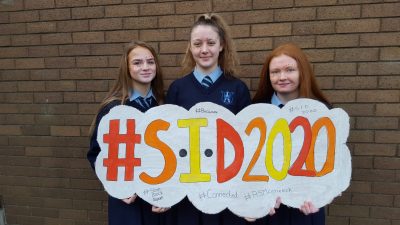 A huge thanks to all of the ASM staff and students who organised an amazing two day #Connected Expo for junior students on Safer Internet Day 2020!

All students were greeted at the door by the Social Media Role Play, where they were presented with icons representing their favourite apps and asked to make suggestions on how to deal with negative attention on these apps! A great opportunity for students to demonstrate their knowledge of the safety features of each app!

A new activity this year was ‘Bowling for Trolls’! Each pin represented abusive language online and students had to choose the right bowling ball to knock them down. The twist though, was that only one ball, representing healthy behaviours (block, report, etc.), actually earned points!

Then we learned that Nana’s back! Students tried their best to pass the Nana Test and prove that they were responsible internet users. Nana wasn’t at all shy about gently scolding a few people so we’re sure the message got through!

The brainchild of our #SID2020 Ambassador, Hailey, students were asked to contribute their thoughts about staying connected online to our #Connected artwork! The suggestions that were made by our students were based in common sense and responsibility and will hopefully promote healthy discussion when they are added to a massive artwork soon! 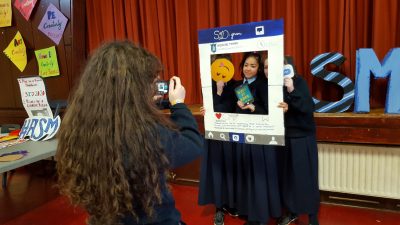 A splash of colour to get everyone talking once they were back in class, we decided to do a bit of face painting using icons from the internet. They were proudly worn all day and kick started quite a few conversations with staff and students who couldn’t make it to the Expo!

Before they left students showed their love for #SID2020 and our #Connected Expo by breaking out their most creative poses in our Photo Booth!

A special word of thanks to our Webwise #SID2020 Ambassador (Hailey), Youth Advisory Panellists (Neala and Ciara), and our amazing TY volunteers who organised a flawless #Connected event!

Safer Internet promotion didn’t end on the 11th of February for Hailey, Neala, and Ciara though!  They visited local primary schools to lecture on fake news and ethical online research, judged the #SID2020 poster competition, prepped a whole-school artwork, and even began planning #SID2021!

ASM STUDENTS NOMINATED FOR ‘LIMERICK PERSON OF THE YEAR’ 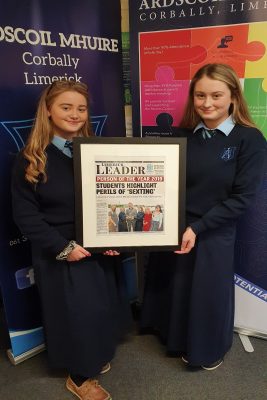