New Singlets for our Athletics and Cross Country Teams 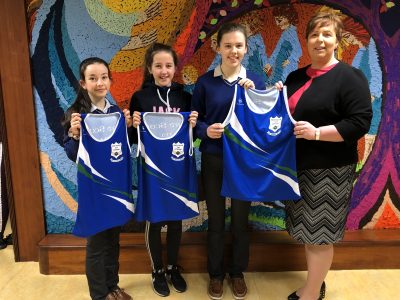 Sincere thanks to the Parents’ Council for sponsoring our new singlets for the athletics and cross country teams.

We were delighted to see our students wearing our new singlets at the recent Waterford Schools Athletics and again at the East Munster Cross Country Championships in Carriganore this week. Our new singlets are in the familiar blue, green and white that are synonymous with Ard Scoil na nDéise and we are sure that our athletes and cross country runners will wear them with pride. Sincere thanks to the Parents Council for sponsoring the singlets for our students. We are very grateful to them for their support.

Last Wednesday, 13th February, we represented our school in the Knights of St Columbanus Schools Public Speaking Competition in the Clonmel Park Hotel. This was the first time our school entered this competition and we are very happy to report that we tied first place with the Ursuline Convent, Thurles. We are now through to the Munster Final. We were on a team of three and our topic was “Justice, peace and integrity of creation”. It was a great opportunity to build our confidence in public speaking in a formal setting. We are very much looking forward to the next round of the competition. 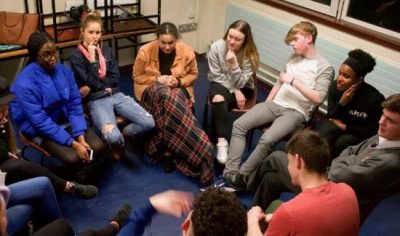 From the 8th of February to the 10th of February, Hannah, Jennifer and I attended The European Youth Parliament in Cork. The European Youth Parliament is an organisation that runs weekend long conferences for young people around Ireland. It is an organisation formed by the E.U to develop an interest for politics and European issues among young people. We arrived in Cork on Friday and stayed in a hostel with 150 other young people attending the conference for the week.  We were then transported to the Presentation Brothers School in Cork where we were split up into our different groups. Each group got an issue facing European citizens and we would spend the weekend making solutions to these problems. On Sunday we had a debate in University College Cork where we presented our solutions and debated about the practicality and reasonability of the solutions. It was an amazing weekend and we got to meet so many new people and make lots of new friends. It was also really interesting to see what it would be like to be involved in politics and to see what happens in the European Parliament. 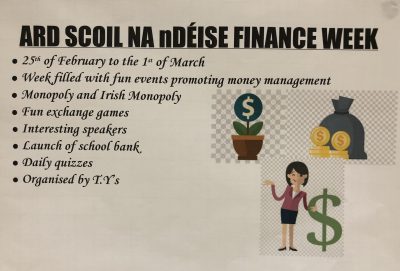 A busy week ahead for Finace Week in the Ard Scoil!

Plans are well underway for our upcoming Finance Week which will run from 25th February to 1st of March.  We have a large and enthusiastic organising committee of Transition Year students who are busy organising a variety of activities to keep us busy during the week. Many of the students are also interviewing for positions in the school bank.  Thanks to Fiona and Valerie, from Bank of Ireland, who are making the interview process a very positive experience for all candidates.  One very important element of Finance Week is making all students aware of the importance of managing their money.  To this end Fiona will meet each year group and present a finance module of relevance to the group’s particular needs. We look forward to learning lots about managing our finances during the week ahead!

On Thursday, 10th January, our First Year students and their science teachers went to Dublin to visit the BT Young Scientist and Technology Exhibition. This was a wonderful opportunity for them to see young people their own age putting the knowledge they acquire in the classroom into practice in the real world. We hope that they took inspiration from the remarkable young scientists that were displaying their projects at the exhibition. Maybe it ignited a spark of curiosity in one of them………we would be very proud to see one of them displaying their own work at this prestigious event some day in the future!! 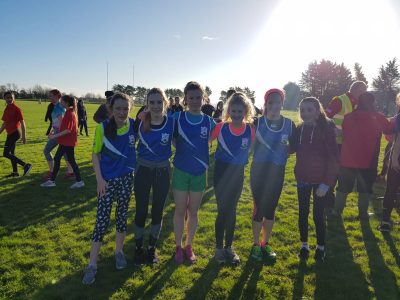 Well done to the minor girls on their first outing!

The County Cross Country Championships were held in St Augustine’s College last Friday, 18th of January, where the Ard Scoil got off to a tremendous start to the athletics season. We had a team competing in all 4 races; Minor, Junior, Intermediate and Senior. The conditions were excellent for cross country running.

First up were the Minor girls who ran an excellent race to finish 6th overall. This was the first time these Minor athletes competed at cross country and, with plenty more training, this team will be the ones to watch. Well done Crea Frisby, Hannah Mc Carthy, Ciara Lenane, Meabh Barron, Molly Fennell and Orlaith Dwyer.

The Intermediate team saw the great achievement by the Junior team and wanted to be part of the fun. Sarah Nyhan had one of her best runs to date finishing the race in first position with a comfortable 150m to spare over everyone else. Ard Scoil also won best team in this race. The team was made up of Sarah Nyhan, Emma Hickey, Anna Hickey and Elia Tutty. Well done girls.

Last but by no means least, our senior team. The senior team was without Lucy Holmes as she was on International duty and competing in Belfast. The team finished an impressive 3rd place. Mary-Kate led the team home finishing 3rd individually. The team was made up of Mary-Kate, Kate Hickey and Sinead O’Brien.

To top off such a successful day, the Ard Scoil won best girls school on the day, two years in a row.  The East Munster Championships with be held in Carriganore on Thursday 31st January. Best of luck girls! 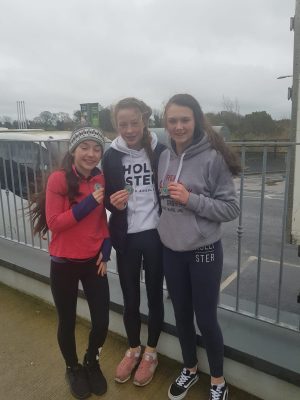 Congratulations to our Junior, Intermediate, and Senior cross country teams who claimed silver team medals in all three categories on Thursday, 31st January at the East Munster Cross Country Championships in Carriganore. A tremendous achievement, especially in such horrendous weather conditions!

On the 23rd of January, Ard scoil na nDéise’s  Junior  Camogie team made their way to Bushy Park for their Munster semi-final against Templemore. The girls got off the bus with a few nerves and headed to the dressing room to kit out. After about ten minutes they went onto the pitch to warm up and puck around.

The referee blew the first whistle and both teams headed onto the pitch and went into a team huddle. They went out into their positions and the referee blew the second whistle. First to the ball was Ard Scoil player Anna Hickey and she passed it to her midfield partner, Mary-Kate Prendergast.

Ard Scoil scored the opening point with corner forward Gillian Whelan pucking it high over the bar. Ard Scoil were having a great start to the match but Templemore started to catch up with a few goals in the last 10 minutes of the first half. 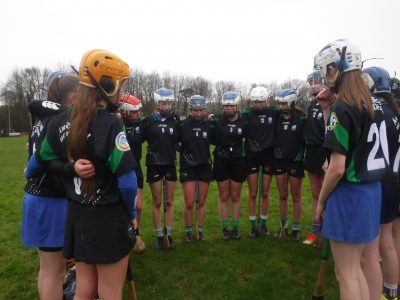 The all important team talk to keep everyone motivated…………..it worked!!

The half time whistle blew and the team huddled up with the players and coaches, Ms. McCarthy and Ms. Prendergast. The teachers explained how there was only goal in it and motivated the girls to keep pushing on because they had the determination to win the game.

As the second half started, the Ard Scoil girls managed to score three points to catch up with Templemore ladies which meant the teams were now level and tensions were high, the next ten minutes were crucial in the match and this is where the Ard Scoil girls really took flight and soared into the lead thanks to crucial scores from Míde Delaney and Gillian Whelan.

Now the Waterford side were really in control of the match, although ‘Our Lady’s School’, Templemore never gave up and put our backs under pressure again as the game was coming near the close. The final score of the game was 2-11 to 3-4 to Ard scoil na Ndeise. The girls were ecstatic with the result and are now looking forward to the Munster final against Scoil Pól, Kilfinane away in Limerick. Best of Luck to our girls. Ard Scoil Abú!!!!!!! 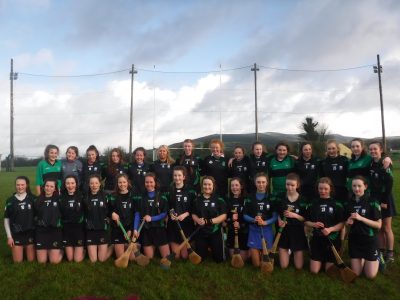 Well done to the Junior Camogie team on reaching the Munster Final!

On Tuesday, January 29th, Ard Scoil Na nDeise’s Junior Camogie team made the long journey to Kilfinane in County Limerick to play Scoil Pól in the Munster Final. The girls were very nervous about the final and were hoping that everything would go to plan . Along with the team bus, Ard Scoil also had a supporters’ bus to cheer them on in the final.

The girls finally arrived at the venue at around 11 a.m. and headed into the dressing room to tog out and warm up . The teachers called out the team and told the girls to head out onto the pitch for a warm up and few drills .

The match started with mid-field partners Anna Hickey and Mary-Kate Prendergast fighting for the ball but unfortunately Scoil Pól girls managed to get the ball and score the opening point. The girls kept pushing and fighting forcontrol but Scoil Pól girls managed to get to the ball first. With Scoil Pól a few points ahead the weather decided to change dramatically for the players. A hail and snow storm decided to come down on the girls making the game even more challenging. Wing backs Míde Delaney and Niamh Fennell tried to keep pushing their opponents down towards the half forward line until the half time whistle blew.

With the girls down by a few points things got tense inside the dressing room. Our Coaches Ms. McCarthy, Ms. Prendergast and Ms. Kiely gave the girls a pep talk and told them to keep pushing as the match was far from over yet . With the inspirational talks the girls ran out onto the pitch to give it another go in the second half.

The girls pushed and battled for each ball which helped them get a few points and a goal to keep them in the game. Unfortunately the whistle blew and Ard Scoil girls were defeated. Everyone was disappointed with the final result but they knew how hard they had fought for every ball especially in the second half! Well done to our girls and we’ll be back again next year!! Ard Scoil abú!