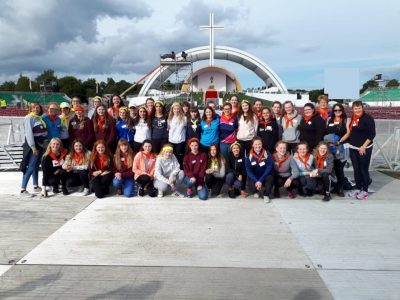 Students from St Brigid’s College Callan, and parents, who were volunteer helpers at the recent Papal Mass

A group of 38 students and 5 adults from St Brigid’s College, Callan, were delighted to be involved in the recent visit of Pope Francis.

Organised by the school Trustees CEIST, this event involved stewarding in the Phoenix Park on the day of the Papal Mass and acting as umbrella bearers for the Ministers of the Eucharist to direct members of the congregation to Holy Communion.

The volunteer group set off for Dublin on Saturday 25th August in high spirits.
They were grateful to be accommodated in Coláiste Bríde, Clondalkin with a number of other school groups.

Following an initial welcoming ceremony they travelled to the Phoenix Park to meet with the other student volunteers and receive final details and training regarding the duties. The students were thrilled to have the opportunity to see the logistics involved in such on a large scale event.

To see the whole seating, hospitality facilities emergency areas and as an added bonus being there as sound checks and rehearsals were underway as they went through the duties they had to carry out.

Upon return to the host school accommodation and following a wonderful meal, students were treated to a Céilí Mór where they had an opportunity to meet with other young people from every corner of Ireland.

The Sunday morning of the Popes mass was an early start at 4.30am as the group set off travelling by bus and on foot to the Phoenix Park.
Despite the constant rain and wind, spirits were high and as members of the public arrived the students swung into action assisting people to find their areas.

Work continued throughout the day and during the liturgy and at the end of it all, a very tired but happy group wound its way back to the bus.

The community of St Brigid’s College and of Callan can be very proud of this wonderful group of girls who represented themselves with honour in the once-in-a-lifetime event.