I’ve taken a great interest in Blessed John Henry Newman recently and was delighted with the announcement that he is to be canonised in Rome on October 13 this year. By all accounts, he was an amazing man: a great scholar, a friend to many, a great priest and pastor, a musician a theologian and a man of outstanding virtue.

At the Mass for his beatification in 2010, he was described by Pope Benedict as “a man of gentle scholarship, deep wisdom and profound love for the Lord”. In a breezy Cofton Park in Birmingham, the Pope spoke eloquently about Cardinal Newman’s understanding of the Christian life as a call to holiness. His motto of Cor ad cor loquitur or ‘Heart speaks unto heart’ points to that deep desire in the human heart to enter into an intimate communion with the heart of God.

We’ll be hearing a lot more about this soon-to-be saint in the exciting lead up to his canonisation but I’ve found myself being particularly fascinated by his approach to education. 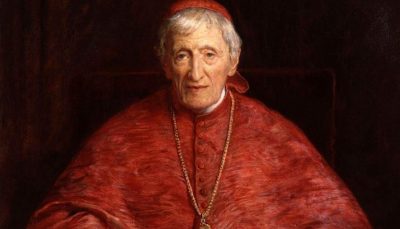 With one daughter just finished the Leaving Certificate examinations’ marathon and another to embark on the exact same journey in September, it’s hard to avoid the topic of education and learning and what it should entail. I’m convinced that it definitely shouldn’t involve tears and disappointment because one tough paper dashes the dreams and plans of so many hopeful students.

Chemistry was my eldest daughter’s last exam and seeing her ashen face afterwards, I was really glad that I’d abandoned my plans to invest in a few helium balloons to mark the end of what has become a rite of passage for many of our young people. It didn’t seem like there was much of a celebratory mood, a feeling shared on social media with one young woman on Twitter woefully tweeting “Whoever created that Chemistry paper, thank you for ruining my chance of going to college…” Another lad sadly posted that I enjoyed Chemistry right up to 2 o’ clock today…” and another was going to take the subject off their CAO choices.

It seemed to me and to many other parents that we’ve lost the complete focus of what education should be about when there is so much depending on how you perform on one day in one exam. It definitely seems nothing like John Henry Newman’s vision which was praised by Pope Benedict XVI as being “firmly opposed to any reductive or utilitarian approach”. Instead, his vision centred on creating an educational environment in which the training of the intellect, moral discipline and a faith commitment would all come together.

One of Blessed John Henry’s most well-known works is The Idea of a University. It consists of a series of lectures which explain his philosophy of education and the object of a university which he viewed as educating the intellect “to reason well in all matters, to reach out towards truth and to grasp it”. Newman really was a radical thinker and this work is still considered to be one of the most influential books on pedagogy in a university.

In light of present day developments in Catholic education, his vision is needed more than ever. There’s something very appealing about an education that isn’t all about exam results, last-minute cramming and viewing university education as the means to an end or in terms of the needs of the economy. The vision Newman inspires us with is of a university that has a life of its own, a place where education and learning isn’t confined within the four walls of a lecture theatre but is something with a much broader scope.

His view of undergraduate education as an end in itself and not merely a preparation for a career is in contrast to the outcome-based approach that even we as parents buy into. I often feel that we’re always looking for the final result rather than pondering on what the whole point of the journey should be.

Newman looked for the things of real value. He believed in the benefits of human interactions and collegiality, once saying that whenever a group of students sit down to eat together, their conversation acts like a lecture from one to the other. The pastoral element of a university is often what goes on outside the lecture hall and libraries and is what promotes the “philosophical habit of mind” which Newman insisted was gained by the vital work of discussing, questioning, debating, reflecting and analysing. The self-taught man or woman who is buried in their books with no time for this necessary discourse and congenial cooperation with colleagues is missing out.

Blessed John Henry rejected the standard which is increasingly embraced where the emphasis is on high marks and competitive learning. His model of education concentrated on intellectual and moral development which require much time for thinking and absorbing.

In Pope Benedict’s 2010 homily, he praised Cardinal John Henry Newman for his vision of education which he said has done so much to shape the ethos that is the driving force behind Catholic schools and colleges today. Hopefully, when my daughter heads off to college in September she’ll find, among the thousands of new faces, some fellow students who will inspire and challenge her, and some good teachers who, in the words of Newman will “create a pure and clear atmosphere of thought which the student also breathes”.

Article taken from The Irish Catholic

Newman’s vision more vital than ever