Our Lady’s Castleblayney trip to Berlin

In early December a group of sixty one senior History and German students from Our Lady’s Secondary School, accompanied by their History teachers, Mr. O’Boyle & Ms. Sheridan, Mr. Lyons, Ms. Brennan, Ms. Sweeney and Principal Mr. Kelly, had the opportunity of bringing their Leaving Certificate History syllabus to life when they visited the historical German city of Berlin from December 6th to December 9th. After arriving on Wednesday afternoon the students took part in a guided walking tour of Berlin, taking in the political, economic and social history of the city including features such as the Brandenburg Gate, Holocaust Memorial, Berlin Wall and a visit to the former headquarters of the SS the Topography of Terror.

Next up, the students had the opportunity to get into the festive spirit with a visit to the world renowned Berlin Christmas markets as well as relaxing with some ice skating in the outdoor skating arenas. This was followed on Thursday with an eagerly anticipated visit to Sachsenhausen Concentration Camp which was used by Hitler and the Nazi’s during World War 2. The students were treated to an excellent tour of the camp and its role during World War 2. Later that evening, the students had the opportunity to visit the German Parliament headquarters at the Reichstag.

Friday began with a visit to the famous Checkpoint Charlie museum and was followed by an interesting and informative visit to Stasi Prison used for holding political prisoners during the Cold War period. Our last guided visit was to the Olympic Stadium where students marvelled at the magnificent architecture and history of this famous building.

On Saturday night, a tired and weary group arrived home safely to Castleblayney with many interesting facts and additional knowledge that can be put to good use in the months ahead as well as many treasured memories that will last a lifetime. 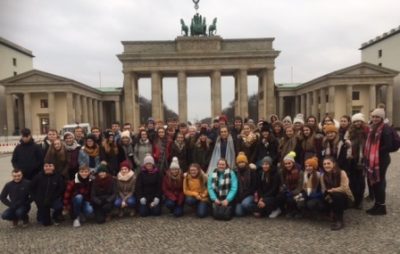 Pictured at the famed Brandenburg Gate in Berlin are Senior History & German students from Our Lady’s Castleblayney, who accompanied by 5 of their teachers enjoyed an action packed tour to the historical city of Berlin where their Leaving Cert History course was brought to life and their German oral skills were put to the test!