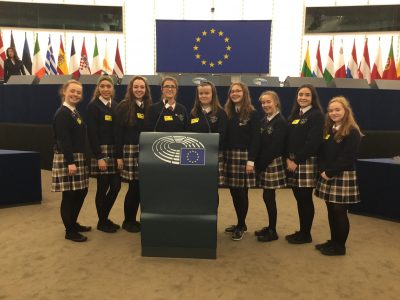 Ten Mercy College students were awarded a place at the Euroscola at the European Parliament in Strasbourg on 26th October 2018. The students flew to Stuttgart accompanied by Ms O Hagan and Ms Harte and travelled up to Strasbourg by train. They took part in committee discussions  on topics as as varied as Human Rights, Immigration and Integration, Culture and Heritage, The Future of Europe, Climate Change, etc.

Eve Lunn and Breanna Spollen were elected by the members of their committees to address the Euroscola outlining their findings and suggesting action re same. They also received questions from the floor on their topics.After a long day at the Parliament the students visited Strasbourg city where they tasted the local specialities of Tarte Gratinee or Flammkuchen as well as Spaetzle  and Spezi! They walked over the friendship bridge built between Strasbourg and Kehl and thus followed in the footsteps of Barack Obama, Angela Merkel ,President Sarkozy and  Prime Minister Berlusconi. On this bridge the students  were literally able to stand with one foot in France and one foot in Germany.

On the final day,  a tired but happy group travelled back to Stuttgart for the flight home….all agreed that the experience was an unforgettable one and certainly enriched their knowledge of the workings of the E.U.