Debating fever continues to spread across Presentation De La Salle, Bagenalstown as they have now qualified for the All-Ireland Schools Semi-finals. They are the last CEIST school left in the competition.

The team of Stephanie Doyle, Katie Doyle, Stanislav Ustinov, Dylan O’Neill & Adam Zielinski have went from strength to strength over the past few months, reaching the final four in the nation. 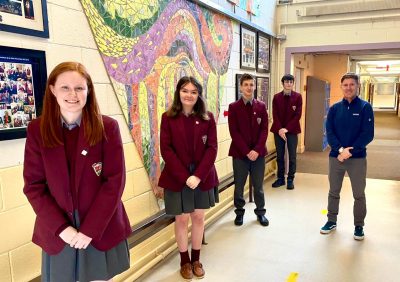 Over 100 schools nationwide enter the prestigious ‘Concern Debates’. PDLS Bagenalstown are no strangers to this level of competition having won the competition in 2015 and reaching the National semi-finals in 2019.  After remaining undefeated in the league phase of the competition, PDLS qualified in the top 16. A tough debate against Portlaoise College, saw them successfully oppose the motion that ‘Nuclear Energy is essential for a clean energy future’.

The quarter final stages were held last week and PDLS were pitted against 2017 National Champions, Sacred Heart Clonakilty. In a very heated debate, PDLS were victorious in opposing that ‘ Vaccinations should be made compulsory’.

The National Semi-finals will be held on April 15th. PDLS will face fierce opposition in Loreto Abbey Dalkey, Dublin. PDLS are faced with proposing the motion that ‘Multi-National Corporations are cleaning up their act‘.

Coach & Teacher, Leon Power, has been coaching debating teams in PDLS since 2015. He commented on the work-ethic and enthusiasm of the students in PDLS. ‘We are very fortunate to have such excellent orators in our school. Each year, there is a massive energy behind debating in PDLS. It is great to be a part of it’.

Best of luck to all involved!