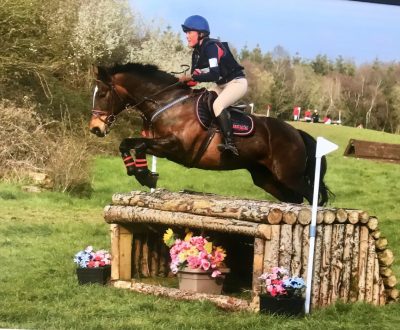 Congratulations to Amy McDonald a Fifth Year student, who recently won the Open and Advanced Open Division Championship at the Connolly’s Red Mills sponsored National Hunter Trials Championships at Annaharvey Farm, Co. Offaly. Amy’s time of 5’36 was unbeatable after her horse, Madges Lane Jinxy, stopped the clock exactly on the target to claim the winning title.

Here in Presentation College, Carlow we recently enjoyed a wonderful week filled with French culture, cuisine and activities. Throughout the week, our school was bursting with French traditions giving students a real taste of life in France.  French teachers Mme Cadinot, Mme Owens and Mme Jully organised various activities for all French students to explore and sample French life.

Students enjoyed various French activities such as face painting and an art competition, with articulate pieces that even Leonardo Da Vinci would be proud of! A traditional French breakfast was enjoyed by our well deserving Sixth Years.  Fifth and Sixth Year French students got the chance to enjoy an amazing French movie “The Keeper”, in The GBS theatre. They found it both enjoyable and exciting.  Transition Year students held a photobooth to capture the smiles of French week in our school.  Our Third Year students were lucky enough to watch a French play when a group of performers came into our school and performed the play ‘Le Rôle’ for them. The students found the play very interesting as some of the students even took part in it.

We were so immersed in the French way of life, that we felt like we were on the streets of France each day of La Semaine Française. 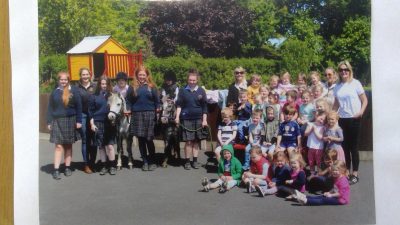 Amy along with other students from Presentation are actively involved with the School’s Equestrain Society, run by Ms Kelly. They have competed in the Inter-schools show jumping league, ridden out on lots of Charity Rides, gone on early morning beach rides and last year they surprised the young boys and girls, from Ashling Nolans’ Clarville Montessori School, with pony rides.

Presentation College recently celebrated its first multi-cultural day. It took place on Thursday 2 May and was a celebration of the twenty-nine cultures in our school. There there was a lot of excitement and real pride from students who were for the first time getting to share some of their culture with the school and others who have worked to highlight how broad our school community connections are. The objective was to help build this inclusivity and sense of belonging. Stephen Ng’ang’a who is the Campaigns and Advocacy Officer for the Immigrant Council of Ireland gave an inspiring talk to staff and students.

Well done to all of our students, who travelled to Waterford on May 2 to compete in the South Leinster School’s Athletics Competition.

Our Junior Boy’s 4 x 100m Relay Team won their event and Adam Shaw won the 100m Sprint. Our Senior Boys also did very well. We look forward to seeing them compete in the future.

The First Year Boys’ Basketball team travelled to Dublin on Friday 3 May for the toughly contested Final. Unfortunately St Michael’s Ballsbridge took the Gold Medal with the score 49 – 41. Well done to Mr Homan and the First Year Basketball Team.

During Lent this year, students and staff raised €358.50 for Trócaire. Trócaire is an organisation that provide invaluable services to developing countries. Students took part in sponsorships and raffles among other activities.

Active Schools week at Presentation College culminated in Sports Day. We were blessed with fantastic weather. Events included Rounders, Bulldog, Soccer, Bouncy Castle, Pony Rides, Skipping, Tug of War, Basketball, Limbo, Cricket, Handball, Rope Tag just to name a few. At the end there was a dance display led by the teachers with some incredible talent from both staff and students. While our sports day is infamous for the variety of events and the level of participation there are some serious elements and some records are set. 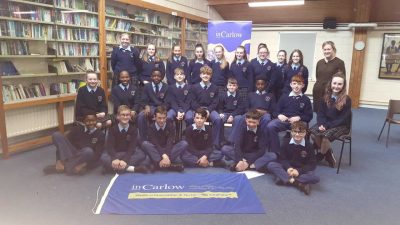 On May 8th First Year students and many of their teachers attended a presentation in the school library. The students had entered a Local Enterprise Competition aimed at reducing the use of single use plastic. They had focussed in particular on highlighters. All present viewed the video made by the group who comprised students from Ms Gibbon’s Business Studies Class. The flag was presented to the school. All First Year students who participated in the competition were also presented with certificates. Brian O’Donoghue, Cathaoirleach Carlow County Council spoke to the group of students and teachers about the importance of this type of project and about how impressed he had been with the research and work completed by the group.

Dwayne Farrell who is the owner of Supreme Fitness, O’Brien Rd. gave a very informative talk to Sixth years on ‘Mind your Mind’and the importance of regular exercise as part of ones life. 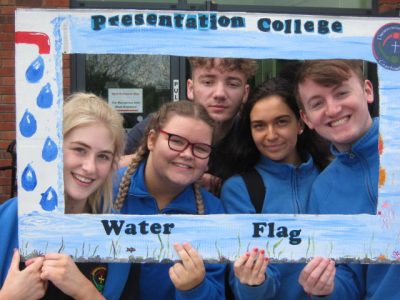 The Green Schools Committee continue working on the Green School Programme. Special thanks to Emily Jane, Shona, Michael, Ava and James who worked on the Selfie Board seen in the photos below.

Karen Mullins and Jimmy Byrne from Carlow Regional Youth Services introduced TY’s to the ‘Get going, get rowing’ programme. This was a very enjoyable activity and rowing is an excellent way to become fit. In the Rounders match between the Sixth Years and the teachers, the skill and determination of the teachers secured their victory. Congratulations to all who took part in the very competitive match.

The Aloysius Foundation is a group of Transition Year students that represent St. Vincent De Paul in our school. We chose the name ‘Aloysius Foundation’ because St. Aloysius is the patron saint of young people. Our group comprises over thirty students. We all became involved in Young St. Vincent De Paul for many reasons like helping others and getting involved in our community but our main reason overall was that we think social justice is a growing problem in society today.

Throughout this school year, we have done many activities and fundraisers to raise awareness for SVP. We started the year by re-launching the Aloysius Foundation in our school. We then had a very successful bag pack in Tesco and raised €772. With the funds we raised, we bought vouchers for teenagers in Carlow for Christmas as we felt that sometimes the food appeal and the toy appeal may overlook teenagers. We held a food appeal before Christmas and our group helped pack the food donations into hampers along with students from other schools. Just before our Christmas break we went carol singing with our school choir. We raised over €300. In January, we gave out homemade treats to local organisations for ‘Blue Monday’. We held a wellbeing and meditation workshop with Dr. Noel Keating for our committee members in February.

In early May, we went to the Young St. Vincent De Paul Regional Youth day in Waterford I.T. This day was to showcase what we did all year. Our group performed a song called ‘Rise Up’ and we got a great reaction from the crowd. Report written by: Abbie Nolan, Niamh Nolan and Caoimhe Connolly 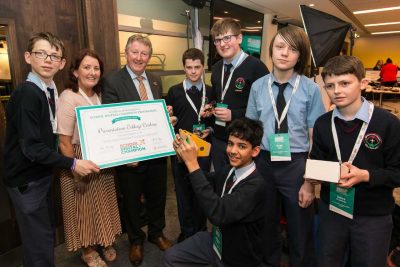 Mr. Sean Canney, Minister of Digital Development meets our Digital Champions! Photo taken at the Showcase by the Google photographer.

‘Transition Year students were visited by Anna Keegan from Trócaire this week. She informed students of the work Trócaire engages in to help communities in developing worlds. Students had an opportunity to see real life families who are benefitting from the work Trócaire do day to day in these countries. Students also received their certificates and badges for all their work over the Easter period.’ 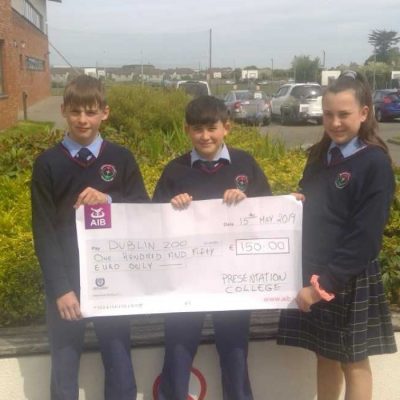 Ms Owens and Mr O’Mahony brought a group of First Year CSPE students to Dublin Zoo recently. As part of the visit, they attended an informative and interesting workshop about endangered animals. The students decided to fundraise and to make a donation to Dublin Zoo. A cheque for one hundred and fifty Euro was recently sent to Dublin Zoo Conservation Society for the Protection of Endangered Species. Well done to all involved.

It was a fantastic day for both our A and B teams. Our B team was narrowly beaten. They played fantastic, displayed great team work and fought to the very end. The momentum lasted throughout the day. Our A team successfully secured a place in the finals which were played on Wednesday May 8 in Rathleague, GAA, Portlaoise.

The A Team played Killina, Offaly in a thrilling first game followed up by St. Mary’s School, Arklow, which turned out to be an outstanding result for Presentation/Gaelcholaiste by scoring 4-7. They were narrowly beaten by Eureka College, Meath in their third and final game. Our B Team proudly supported the ‘A’s throughout the day, encouraging and motivating the girls in all games.

We are very proud of all Junior camogie players. Every one of you has trained hard, put in a superb effort and showed great team spirit throughout the year. Well done Girls. Thanks to Ms Breen, Ms Brennan and Ms Kinsella for training and supporting the girls throughout the year. We look forward to another successful camogie year during 2019/2020.

Staff and students were invited to view the work of our two Sixth Year Construction Studies classes at lunchtime. The work of 16 students was displayed in the front hall over lunchtime. There has been a lot of effort, sweat, tear and hours after school gone into these projects over the last year, and they rarely get a chance to display them. Below are some photos taken from the display. 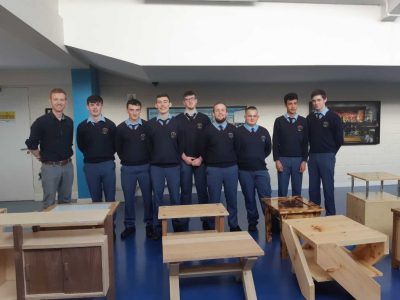 The graduation for Transition Year students took place on Tuesday May 21. Over 350 people including students, parents, teachers and Fr. Conn, chairperson of the Board of Management, attended this event. The night was a reflection on the activities that students took part in over the year and they were presented with their certificates. Music and singing was provided by the students.

Sixth Years had their graduation ceremony in the Cathedral with lovely mass concelebrated by Fr Tom Little and Fr Tom Dillon followed by refreshments in Carlow College. The theme of the mass was ‘Take Flight and Remember Your Roots’.

Being an ‘Active School’ the staff at Presentation College regularly run 5K at lunchtime. The final run of this school year was on Wednesday 22 May. This was also to be the last run for Mr Billy Delaney in his role as Deputy Principal. An unsuspecting Mr Delaney set off with colleagues on the final staff 5K run before he is due to retire. A fitting tribute had been organised and upon their return to the school the runners were met by some former athletes and a Guard of Honour made up of staff and students. They all ran the final meters together led by Mr Delaney. 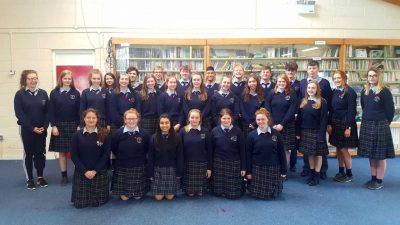 Congratulations to the newly appointed prefect team. We wish them and Ms Maher every success in their new role.