National trophy comes to Kilkenny for the first time.

Presentation Secondary School TY legal students are on fire! Having qualified to go to New York to represent their country in the Empire World Championship Mock Trials next October, they went on to win outright the National Public Access to Law Mock Trials that took place in the Central Criminal Courts on Saturday the 11th May, beating Loreto, Kilkenny, in the Semi-Finals and Maynooth Education Campus, Kildare, in the Finals.  This is Presentation’s first year to run the law course and enter the competition under the guidance of the school’s law module teacher, Ms. Emma Brophy, with the assistance of Ms. Frances Cotter. The three officiating judges awarded them the Hon. Mr. Justice Paul Carney Cup at the Final deeming them the National Champions impressed by their exceptional standard of legal knowledge, their ease and fluency with courtroom procedures and their top class courtroom decorum.

Not only did the team of 18 students win the national competition, they also won the two single awards of the mock trials final: best speaker, Aisling Ryan and best witness, Roisin Dempsey. The Presentation Kilkenny team will now go on to participate in the prestigious Empire World Championship Mock Trials in Manhattan, New York against teams from around the world. 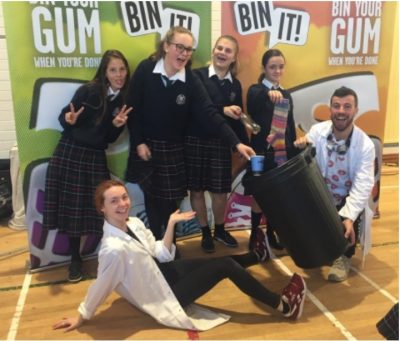 While the colours of Presentation Secondary School, Kilkenny may be navy & light blue, the Pres Green Schools Committee have gone over to the green side with the launch of their “Bin-It” roadshow. The two Bin-It presenters, Gemma and Johnny, delivered a fantastic presentation which had the entire 1st and 2nd year cohort jumping to their feet on several occasions. At the same time, the Bin-It presenters also managed to deliver a strong environmental message, explaining how litter, and particularly chewing gum, is bad for the environment and adds to the expenses of our local councils.  The students really enjoyed the show and gave very positive feedback to the presenters.

Selecting a Green Slogan was their next task, and there was unanimous agreement about the power of the old Indian proverb, “Treat the Earth well, it was not given to us by our parents: it was loaned to us by our children.”

Their next Green School initiative was a whole school presentation from an Energia representative, who passed on many useful energy saving tips which were easy to accomplish: turn off the lights in an empty classroom, use timers for heaters and make sure computers are turned off- all very manageable and practical.

One of their main aims as a Green School Committee was to get students, staff and management of the school to “buy in” to the Green School ethos and message. On any given day, students in their spare time are filling “ECO Bricks”, painting Green School murals, collecting and separating litter, implementing a new bin system, setting up a “bug hotel” for our insect friends, preparing a pollinator plan, emptying green bins, replacing tin foil containers with cardboard containers used for food in the canteen, preparing Green School posters and “spring cleaning” school grounds and local roads.  With our environment so much in the news these days, we can rest assured that the ladies of Presentation Kilkenny have their sights firmly set on making our world a greener place.

On Monday 1st of April, Presentation Kilkenny’s Under 17 soccer team became the 2019 FAI Schools Junior A Girls National Cup Champions.  They claimed their victory of 2-0 against the experienced side of Claregalway College in Athlone Town AFC grounds.  It was a tight first half, with the score remaining 0-0 at half time.  Niamh Phelan opened the scoring line to 1-0 in favour of Presentation shortly into the second half.  One major highlight of the game was the game-changing save made by Presentation’s goalkeeper, Cliodhna Murphy, as Claregalway almost secured their equalizer.  Presentation played steadily all along, and then in the 65th minute, Niamh Phelan won a penalty, which was scored with perfection by Cliodhna Donnelly.  The girls played an overall astounding game and the team was managed and trained by John Mc Donald, Clodagh Mc Donald and Jenny Reddy.

Exactly a month later, on the 1st May, the Under 15 side took on Claregalway College yet again in the national final.  International star, Ellen Molloy, bagged all three goals for the Kilkenny side in their 3-0 victory.  She was presented with the match ball following the game in recognition of her achievement.  The side was coached by Dan Campion and Dervla O’Shea. 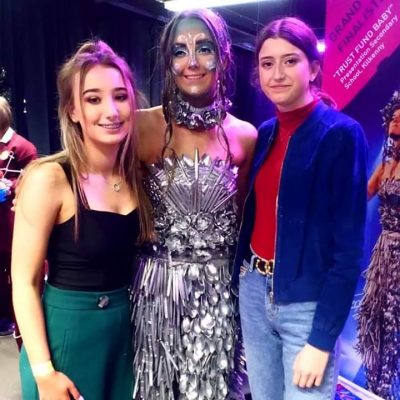 Presentation Kilkenny was delighted to be represented in the National Junk Kouture final by “Trust Fund Baby”, a beautiful creation from a number of Transition Years from the school.  They were under the guidance of their art teacher, Margot Hennessy.  With hundreds of entrants from around the country, reaching the grand final in the Three Arena this month was an amazing achievement.