Pres Thurles qualified for the 2018 All Ireland Senior football final after a pulsating victory in Mullingar on Wednesday afternoon. In atrocious conditions Pres captain Aoife Maher won the coin toss and opted to play with the elements and this would prove to be a pivotal moment. The Pres girls immediately set about setting a target for the Mullingar girls to match when their turn to play with the gale force wind would arrive. Lauren McCormack, Saoirse O’Meara and Jenny Irwin fired over points in the opening minutes as Pres Thurles dominated the early exchanges. Casey Hennessy delivered the first big score of the afternoon when she burst through the Mullingar defence before firing to the back of the net. This score was quickly added to by a neatly taken point from Ciara Dwan. With such a strong wind at their backs the Pres girls knew they needed to set a big target for their Westmeath counterparts and on the stroke of halftime Ciara Dwan fired home an unstoppable shot to raise a second green flag. The second half was all about the Pres rearguard action and Marie Creedon was outstanding as she repelled waves of Mullingar attacks. Aoife Maher, Niamh Ryan, Aoife Finlay, Dervla Heffernan and Ellen Moore made crucial interventions throughout this half as Mullingar started to chip away at the Pres Thurles lead. Loreto Mullingar fired over 1-4 without reply to narrow the gap to just four points but a Pres breakaway led by Katie Ryan and Muireann O’Connell saw the brilliant Casey Hennessy fire home another goal to take all of the momentum away from Loreto and book the Thurles girls a place back in the All Ireland final for the second year running. The girls will now play Glenamaddy Community School from Galway on the 15th of April.

This week fifteen of our first and second years competed in a gymnastics competition held in Loreto Secondary School Clonmel. It proved to be a very enjoyable day out for the girls, many of whom received multiple medals for their fantastic gymnastic ability. Other schools who participated on the day included Presentation and Loreto schools. A gymnastic competition like this has not happened in recent years and it is fantastic to see such interest in the sport again. The quality of routines on the day was very high with girls from all schools showing off some great skills in flexibility and body control. We look forward to attending more days like this and the girls are busy working towards improving their performance for future competitions. 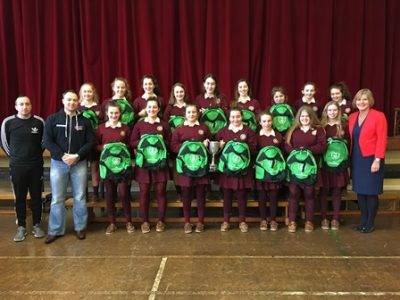 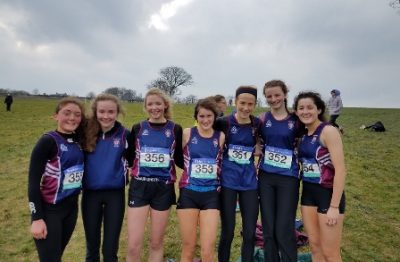 On Monday 5th of March our Transition Year students Sophie Dooley, Matilda Magner, Ciara Treacy, Lillian Hayden, Aoibheann Duggan, Leah Dwyer and Eimear Campion travelled to the Helix in Dublin to take part in this years Junk Kouture Regional Final. They set off early that morning and were prepared for a big day ahead! On arrival, they were thrown straight into catwalk rehearsals, interviews with the judges and then straight into preparations for the public final that night. The crowd cheered as the fifty-two acts showcased their fabulous creations made entirely from recycled materials. The level of talent and artistic skill was amazing and our two models, Lillian Hayden and Ciara Treacy wore their costumes with great pride. Despite not progressing to the finals they represented the school and themselves in exemplary fashion and we are very proud of them. A big thank you to their Art teacher Mrs O’Sullivan for all her hard work and dedication in the lead up to the competition. 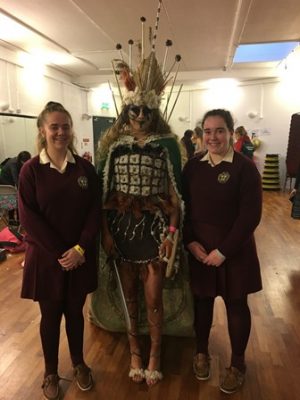 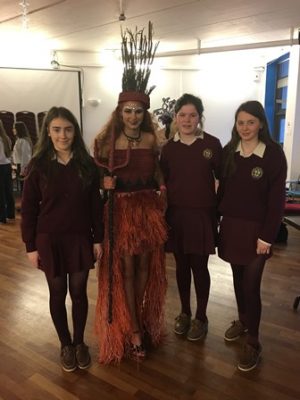 Pres Thurles TY students and their costumes, Laoch Feirme and Queen Maeve are pictured at the Regional Finals of this years Junk Kouture competition. 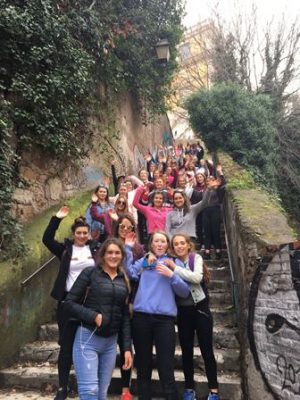 Early morning on the 7th of March, a group of one hundred students and staff set off for Rome. We were all very excited and couldn’t wait to see the beautiful city, try the traditional food and experience the culture. Our first stop was to Rome’s most famous classical ruin The Colosseum. We then went on a walking tour of the city, stopping at the Forum, enjoying an ice cream by the Trevi Fountain and admiring the impressive dome of the Pantheon. On the second day, we visited the Vatican Museums which contain masterpieces of painting, sculpture and other works of art collected by the various Popes through the centuries. The highlight of the day was the Sistine Chapel, which is the site of the Papal conclave, the process by which a new pope is selected. The fame of the Sistine Chapel lies mainly in the frescos that decorate the interior including The Last Judgment by Michelangelo which was of great interest to the artists among us. We then went to the Gianicolo , one of Rome’s highest hills to enjoy a breath-taking panorama of the city. We rounded off the evening with a masterclass in Pizza making. Day three took us out of the city to the ancient ruins of Pompeii near Naples. All one hundred of us climbed to the summit of Mount Vesuvius whose eruption in AD79 destroyed and buried the city of Pompeii under volcanic ash, it was an amazing experience. On our final day we visited the Catacombs where early Christians and nine popes were laid to rest. We explored some of the eighteen miles of tunnel where dozens of martyrs are buried. This trip to Rome was an extremely enjoyable one where great friendships were forged and memories made along with the valuable educational and cultural knowledge that we attained. 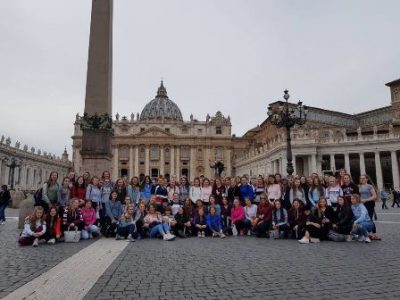 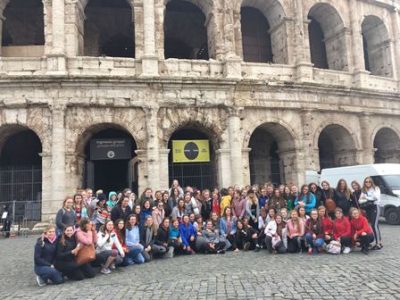 Pres Thurles TY students are pictured on their recent annual school trip to Rome. Here they visited the Colosseum, The Vatican, The Trevi Fountain, The Catacombes,and Pompeii(to name but a few!!) as well as being treated to some spectacular walking tours of the city. Overall they had a magnificent time and a huge thank you to all their teachers for travelling with them.

Congratulations to Transition Year student Eimear Campion, who performed exceptionally well in her German Junior Certificate 2017. Eimear is eligible for a scholarship awarded by the Embassy of the Federal Republic of Germany. Congratulations to Eimear and her teacher Ms Roisín Ryan.

On Tuesday 13th of March three fifth year students Aoife Max, Ciara Trainor and Laura Fanneran attended the CEIST Student Leadership conference with their teacher Susan McGee. Students participated in workshops encouraging and celebrating student leadership in schools. Students were addressed by Archbishop Diarmuid Martin, organisers of the World Meeting of Families and the inspirational Fr Phillip Mulryne who was ordained recently. Fr Phillip, who featured in a recent episode of Nationwide traded the glamourous life of a Man United football career to train as a priest. Ephrem Feeley’s hymn, the official hymn of The World Meeting of Families was taught to the students during the day. This was a very enriching day for our students.