Below are some pictures taken over the Christmas celebrations in our school.

On January 3rd our Third Year CSPE class Naomh Gobnait, along with our teachers Ms. Nugent and Ms. King had the privilege of visiting the Midlands Prison, Portlaoise. This was a hugely informative and at times exhilarating experience. On entering the prison we had to go through a number of security procedures which were quite intimidating, but thankfully we all passed through without incident. (Except for Ms. King who did manage to set the alarms off!) We were met by a very helpful prison guard who talked to us about the role of the prison, the role of prison officers and about the prisoners who were incarcerated there. He then took us on a tour of the prison, which included a tour of the B Wing, one of the prison cells and the exercise yard. We also got an opportunity to see the prisoners‘ workshops where samples of some of the prisoners‘ excellent work were on display. Later we had an opportunity to view the visiting rooms which was a sad reminder of the impact that incarceration can have on prisoners and their families.

On Wednesday 8th January students representing our school headed to the RDS in Dublin to take part in this year’s Young Scientist competition. Transition Year students Hannah Hassett, Kate Anna Moloney Ryan and Clara Coonan carried out their project on the link between the agricultural sector and global warming, under the clever title “Can Cows Cut the Carbon Crisis?” Their research was aimed specifically at the use of sexed semen and how its use might help to alleviate the problems associated with greenhouse gas emissions in the future. Well done to the girls on their great work! 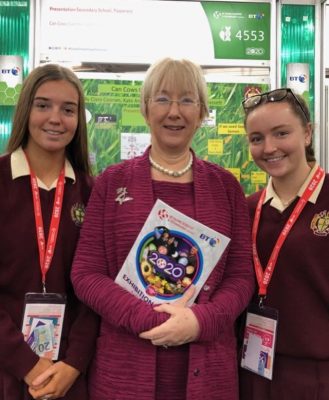 Our Transition Year students recently made their annual trip to Dublin to enjoy a day filled with culture. It was an early start for the students, as they began their journey to the capital. Their first stop was the Dáil where they were given a tour of Leinster House and the Seanad.  The tour started out in the public gallery and the  chamber, the latter being  deserted as most of the politicians were out on the campaign trail for the upcoming General Election.  Next up was a visit to the National Gallery of Ireland and  the National Museum . In the National Gallery students got an opportunity to appreciate works from Caravaggio and Monet as well as experience the Gallery’s current exhibition ‘Moment in Time’.  In the National Museum the students experienced pieces from the Bronze Age, the Iron Age as well as their particular favourite – the Bog Bodies. They certainly came away with a greater appreciation of the abundance of culture on their doorstep.  After lunch on Grafton Street, it was on to Croke Park which was the highlight for many of the girls.  They visited the players’ area, dressing rooms and walked out on to the hallowed turf. To round off a wonderful day the students attended the Bord Gáis Energy Theatre to be enchanted and enthralled by one of the greatest musicals of all time, ‘The Sound of Music’, with memorable songs such as Edelweiss, My Favourite Things, Climb Every Mountain and of course the title song, The Sound of Music.

Second year class Naomh Tomás were awarded second place in the Saffron & eFlow Science competition. The students created a video with the title  ‘How can science and technology integrate different modes of transport to make travelling easier, cleaner and more efficient in their community over the next 10-20 years?’. They received cinema passes for their efforts. The students enjoyed the experience and acquired research skills and developed their creativity.

Catherine McCormack visited our school for the last time in her official role as CEIST Coordinator to conduct Student Council Training. We will miss her dearly. 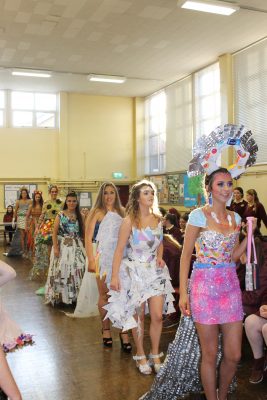 Costumes on display for the Junk Kouture Fashion Show held in our school recently.

Presentation Thurles qualified for the 2020 Senior A Munster final after a comprehensive 5-0 win on Tuesday last against Coláiste Dún Iascaigh. The game was over as a contest after twenty minutes as a quick fire double from the impressive Ellen Moore was quickly followed up with goals from Emma O’Sullivan and Ciara Dwan. The second half continued in the same manner as the home side applied all the pressure and a fifth goal duly arrived with a great finish from Missy Condon. The Pres girls now look forward to a Munster final against St Mary’s Newport on Thursday 23rd of January in the Canon Hayes Astro-Turf pitch in Tipperary Town.

The Presentation footballers booked a date in the Munster semi final thanks to an easy victory over Loreto Fermoy. Straight from the throw in Pres were on the front foot with Ciara Shelly and Enya Maher completely dominant in midfield. Enya Maher ended the day with a personal tally of 3-12 ,in a player of the match display. Ava Ryan, Caitlin Shelly, Helen Cleere, Olga Maher, Amy Reddan, Emer Dwan and Emer Fogarty were all very much to the fore in a dominant display by the Pres girls. The semi final lineup sees Pres Thurles travel to Tournafulla on Friday 31st of January to play Coláiste na Sceilge, Caherciveen.

A big congratulations to Úna and Áine Duggan who recently took part in the Tipperary Schools Handball county final.  Áine successfully made it through the first round and Úna was crowned First Year singles champion. As a result of this success Úna went on to represent Presentation Thurles in the Munster Schools Handball finals held in Limerick last week. Here Úna had a super win in the semi-final . The final was a close contest with Úna narrowly losing out  25-19 . Well done girls!

Our Minor hockey team, captained by second year student Kate O’Hora, are currently two points clear at the top of the league table with one game to play. They had fantastic wins over Villiers, Mungret and the Ursuline and drew with Crescent and Laurel Hill Coláiste.

The girls gave an outstanding display against Villiers last week winning 3-0. There were cracking goals from Juliet McGarry, Laragh Griffin and Henrietta Kiernan. This week they played Crescent Comprehensive College in Limerick and drew 1-1 against a very impressive side. The goal scorer in that game was Eliza Jane Quealy who was very unlucky for a second, hitting the post twice on the same attack. They await their cup fixture which will be the winners of Gaelcholáiste and Laurel Hill Limerick.

Well done to our senior hockey team who had a great win against a strong Castletroy College team in the University of Limerick recently. This was a cup game and the winner would take all, so the Presentation girls were ready to do battle. Presentation Thurles came from behind twice to level the game with goals from Laura Murphy and Aoife Finlay. With just a minute to go, the game was tied at 2-2. Presentation Thurles won a short corner and Vicky Owens scored the winning goal in the dying seconds. The girls now progress to the next round of the cup. Final score 3-2 to Presentation Thurles. 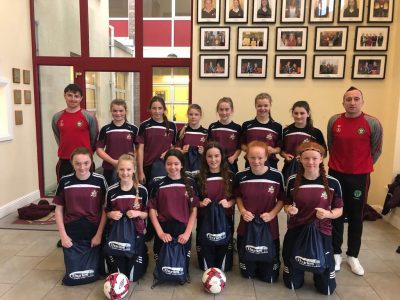 Congratulations to our 1st Year Futsal team who were crowned All Ireland Futsal Champions!. 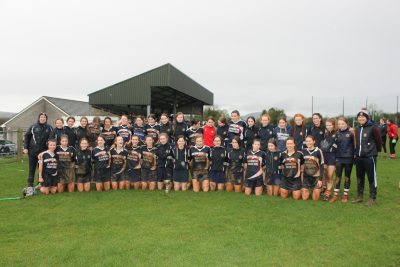 Congratulations to the Jnr Camogie team who were crowned Munster Champions!