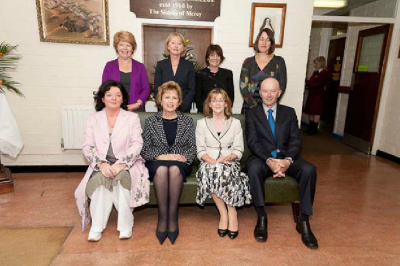 Originally an isolated country house, the property was bequeathed to the Mercy Sisters almost 80 years ago when our State was still very young.

During the 1930’s it was used by the Sisters as a holiday home for business girls.

When Tuberculosis was the scourge of the Land, during the 1940s and 50s, the Sisters nursed and educated children who were suffering from this dreadful disease epitomising the Ethos of the Mercy Sisters in compassion for the most vulnerable. This work continued until 1959 when this particular need no longer existed.

Around this time, Ballyroan began to expand and the need for a school arose. At the request of the then Archbishop John Charles McQuaid, the Mercy Order opened Sancta Maria School. 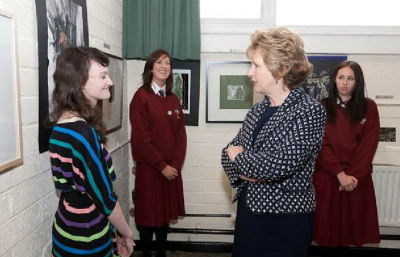 The first roll call had 23 boarders and 12 day students in the Senior school and a further 35 children in the junior school. On the teaching staff there were 7 Mercy Sisters and one lay person.

Today, Sancta Maria is a vibrant college with 500 students. They have a strong academic curriculum complimented with extra-curricular activities in the Arts, Business and Sports.

The following is an extract from the speech of newly appointed Principal of the school, Ms. Geardine Kennedy, on the visit of the President.

“As Ballyroan has changed and our society has developed, Sancta Maria has responded to the new challenges and new demands. I am delighted to say that the Department of Education have recently approved a major development of the College costing in the region of €11 million.

We have come a long way from our humble farmland beginnings, and even though the Sisters of Mercy have now gone from our corridors, they have left us a legacy in the tradition of Catherine McAuley.

At Sancta Maria we will always enshrine in our ethos spiritual values and compassion for all, but especially for the most vulnerable. 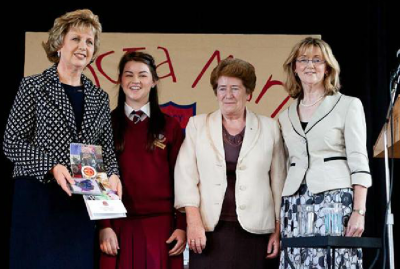 These are values that are epitomised by our distinguished guest who chose Building Bridges as the theme for her Presidency.

She too has witnessed many changes in Irish society as she moved from Student to Barrister, to Broadcast Journalist to Academic to the Highest Office in the land.

Together with her Husband Martin, an unsung hero in many respects, she has done enormous work to further the cause of peace on this Island.”