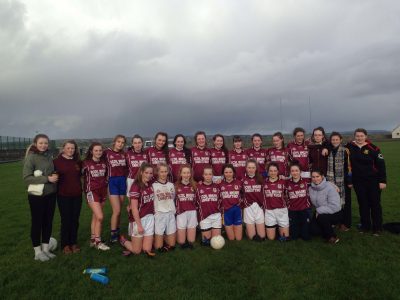 On the 24th of November 2017, Scoil Mhuire’s senior team travelled to Lahinch pitch to play in the senior county final against Kilmihil. It was a cold day and it was reported that some girls toes were numb before the game even started.. The game started at 11 and the starting team for Ennistymon was as follows; Emily Andreasson (goalie), Julia Kismann and Chria Guerin (corner backs), Lisa Conneely (full back), Ciara Malone and Caoimhe Longe (wing backs), Jane Murphy (centre back and captain), Maria Fitzgerald and Hannah Shannon (mids), Sinéad Hogan and Eimear Cotter (wing forwards), Niamh O’Dwyer (centre forward), Grainne Howley and Orfhlaith Considine (corner forwards) and Aoife Nagle (full forward).

Niamh O’Dwyer opened up the scoring for ennistymon with a great goal, which Kilmihil responded to with two goals back to back. Eimear, Maria and Orfhlaith drew the game level scoring 3 points. Kilmihil got two more points followed by a free taken by Hannah to bring it back to a 1 point game. Kilmihil scored another two points, but Niamh scored another point to keep them in touching distance. Kilmihil scored one more point and the halftime score was Kilmihil 2-5 and Ennistymon 1-5.

After the break Kilmihil kicked into gear, putting them a large distance ahead of Ennistymon. Áine Marrinan and Danielle Griffin replaced Maria and Eimear in the second half. Throughout the second half Kilmihil had most of the ball, but there was some great scores from Niamh, Sinéad, and Danielle Griffin. Unfortunately, Ennistymon couldn’t bring back the game, and the end score was Ennistymon 4-7 to Kilmihil 5-11. The Ennistymon girls did the school proud in the cold weather against a tough opposition, they were determined and didn’t give up even in the very end. Thanks to Ms Torpey for her encouragement and advice to the girls as coach and all the parents that came to support.