The following is a report taken from the school website on their great achievement, 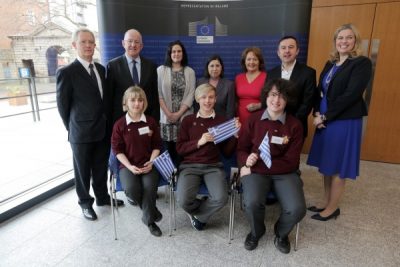 Despite a very early start to the day (6.30 !) a group of dedicated T.Y. students, their teacher Ms. Glynn and Barbara Kelly and our debating trio of Megan Olley, Michael Fitzgerald and Ethan Delaney made the long trip up to Dublin to compete in the Model E.U. Council debate in Dublin castle. The debate took place on Friday, 10 March 2017 in the Printworks in Dublin Castle and Transition, Fifth and Sixth Year students from 28 schools competed in the event. Each school was tasked with representing one of the 28 European Union Member States.

St. Joseph’s had been assigned the country of Greece for the purposes of the debate and we were delighted to speak to the Greek ambassador over breakfast. She kindly presented us with some Greek memorabilia and spoke warmly of her visits to Clare. She also warned that she was expecting a win as last year’s previous winners had also been representing Greece! We assured her we would do our best. 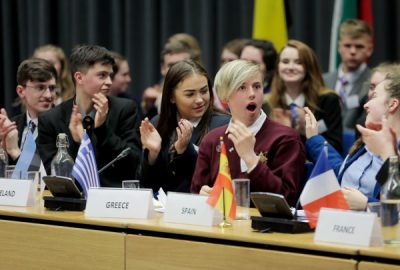 As Gerry Kiely, Head of the European Commission Representation in Ireland said: “This debate is to get our young people thinking about the big issues that will affect their lives. It’s to show them how politics works in the EU which is so important in decisions about Trade. Decisions about their futures are made in Dublin, Brussels and further afield, and it’s critical that our youth understand what is going on in this area and how decisions are arrived at.” We were delighted to take part in such a fantastic event.

The theme of the 2017 debate was EU trade policy and in preparation our team had put a lot of effort into researching international trade deals and the implications for Greece’s citizens and economy. Equipped with weeks of research our team presented their views on international trade agreements and the importance of maintaining high ethical standards and ensuring that Greece economy did not suffer as a result of an EU agreement. One of our key focuses was on the importance of maintaining the status of ‘Products of Designated Origin’ within any future trade agreements. A failure to do so would have had a negative on Greece’s Feta cheese industry.

The debate was chaired by Mairéad Lavery of the Irish Farmer’s Journal. Despite opposition and derision from other countries Greece remained true to its ideals and eloquently expressed why we must protect the livelihoods of ordinary citizens. After a particularly tense stand-off with Spain our team received an outburst of applause – a signal of what was to come!

When Lynn Boylan MEP announced the winning and runner-up teams and presented the Prizes and we were incredibly proud and happy to be announced winners of this prestigious competition- an incredible achievement considering the scale of the event.

St. Joseph’s have been invited to bring 24 pupils and their class teacher to Strasbourg in France to take part in the European Parliament’s Euroscola project in September. This project allows students from the EU’s 28 Member States to work together for a day, just as the MEPs would in the European Parliament. The team speakers also received a goody bag with an I pad mini. We are all incredibly excited about this fantastic opportunity. An enormous THANK YOU to Ms. Glynn, without her support and enthusiasm, we would not have achieved our win. Photos courtesy of Maxwell Photography 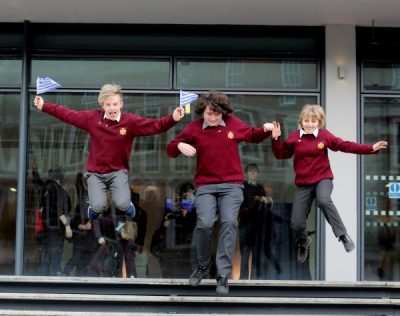