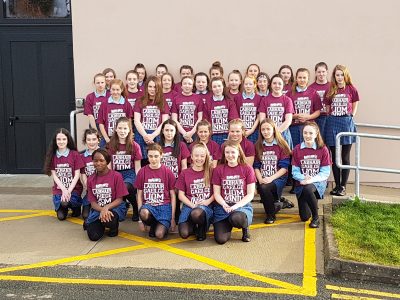 On Tuesday, 13th November, students from St. Mary’s accepted the challenge of speaking Irish only for twenty-four hours. St. Mary’s was 1 of 300 schools in Ireland that took on the challenge. This was the fifth year of Gaeilge24, organised by Conradh na Gaeilge. The students had to speak Irish not just in school, but also at home and while participating in out-of-school activities such as sports. As part of the event, a sing-along was arranged in the school canteen at lunchtime. The event was coordinated by the teachers in the Irish Department and supported by the students involved in Coiste Gaelach. Participating students wore special t-shirts and wristbands provided by Gaeilge24. By participating, the students were given an opportunity to show their passion for, and commitment to, the Irish language.

Due to the increasing number of students attending St. Mary’s, the school has recently completed the development of a new Physics Lab and the construction of a new, modern Prefabricated area. The Physics Lab contains state-of-the-art scientific equipment and represents the commitment of St. Mary’s to increasingly invest in science education for our students. The Prefabricated area contains five new classrooms, including an Art room. A teacher has been assigned to each classroom. There is also new office space and a kitchen area for staff. A wireless projector and a Chromebook has been installed into each classroom. The teachers are utilising G-Suite to work collaboratively on projects, for example, transition year e-portfolios. This investment in ICT is the next step in the school’s plan to improve its use of digital technology for teaching, learning and assessment.