It was a challenge to define the school’s centenary year – but the staff and pupils of St. Raphael’s College Loughreaproved more than up to the enormous task of staging the renowned Lés Miserables as their school musical.

And in doing so, they were marking two important milestones in the school’s history; one hundred years of education and sixty years of successful musicals.

Over one hundred students took to the stage to perform Lés Miserables and the presence of each student was felt in the strength of the choral singing.

Lés Miserables, a story spanning seventeen years, is a story describing the lives of ordinary citizens during the 1832 French rebellion. It is primarily focused on the story of Jean Valjean, an ex-convict who is seeking redemption. However, the story has an intricate storyline in which all of the main characters are interlinked.

There were remarkable performances from all of the lead roles as the elaborate plot offered the students from fourth year and transition year, that range in age from fifteen to seventeen an opportunity to publicize their incredible voices and acting skills that proved far beyond their years. 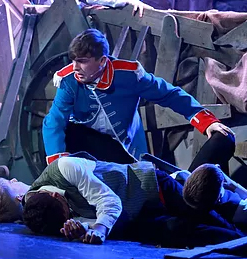 Myles Feerick as Valjean provided a phenomenally disciplined performance, executing both emotionally moving and extremely powerful pieces with equal prowess. However, the judges from NUIG’s musical society who provided feedback as part of their annual school musical competition specified that it was Feerick’s acting and his “ability to connect on different and appropriate levels with all of the different characters in the play”, in particular his relationship with both young and old Cosette which set him apart.

The judges expressed to the students after the show that they were “blown away” by the musical and explained that they thought certain acts reached “professional standard” such as Andrea Treacy and David O’Grady’s performance of ‘Heart Full of Love’.

O’Grady and Treacy who played the conflicted lovers Marius and Cosette shone in their respective roles, as their chemistry on stage lended itself to a beautiful emotional aspect of the play; however, Jessica Moore’s powerful portrayal of the rejected Eponine, made this love story all the more believable and bittersweet.

Jessica made the character of Eponine her own with the judges praising her “subtle but effective” facial expressions but it was her stunning rendition of ‘On My Own’ which was greeted with rapturous applause from the audience.

However, no story is complete without an antagonist or two and this job was wisely left to Mairead Dillon and Gearoid Treacy who provided the villainous comic relief in their portrayals of Eponine’s parents the Thenardier’s. Dillon and Treacy’s performance of ‘Master of the House’ brought the house down and the audience’s appreciation of this was evident during the curtain call.

Although the youth theatres in Loughrea have a large enrolment, there are many students who do not discover their talent and passion for performing until they are older. Rebecca Long, Ethan Moran and Conor Hill all of whom had lead roles are some of these students.

Moran was commended by the judges for his consistent depiction of Inspector Javert, whose ongoing battle with Valjean ends with his demise by his own hand. Ethan was also praised for the scene in which Javert dies, due his passionate final act and the difficult technical aspect to his death.

Conor Hill who played Enjolras gave a commanding performance and led the male cast who portrayed the Friends of the ABC in an impressive version of ‘Do You Hear the People Sing?’, while Rebecca Long as Fantine gave a hauntingly beautiful performance and her rendition of ‘Come to Me’ during Fantine’s death scene stood out as one of the more emotionally moving pieces.

While there is no doubt that the leads were the stars of the show, the judge’s payed special tribute to the costumes and the staging of the production. The stage crew, led by fourth year student Lauren Keogh handled a demanding set which included prop switches during performances with expertise; and indeed it was the set design which allowed for a scene which left most of the audience in tears. 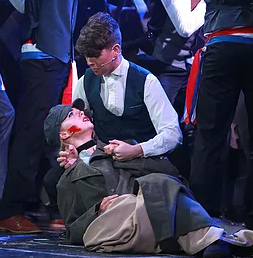 David O’Grady’s performance of ‘Empty Chairs and Empty Tables’, which was poignant in its own right was made spectacular by the Friends of the ABC whose slow-motion acting skills behind a mesh gauze gave the effect of a flashback dream sequence. This fantastic use of set was part of the direction from the teachers who made the entire show possible.

Laura Reynolds, Martina Harkin and Shane Farrell who worked endlessly for the last ten weeks, directed and produced a remarkable show which will be remembered both in the school and locally for years to come, as it was received with rave reviews with townspeople even requesting an additional night.

However, this “breath-taking” show as Principal Paul Cafferky so fondly referred to it has seen its last performance in Loughrea’s Temperance Hall; nonetheless, the musical achieved what it was supposed to. The powerful and demanding performance of the students in St. Raphael’s was a celebration of all the talent the school has offered over the years and which no doubt will continue over the next one hundred.