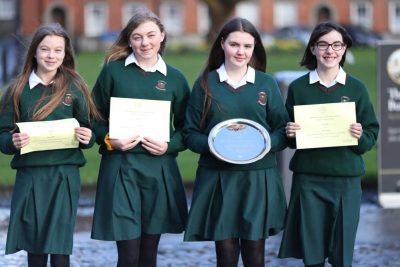 Our junior public speaking team of Niamh Behan, Rachel Harries, Keira Reilly and Roisin Behan finished in second place in the national final of the Irish Federation of University Women’s U15 public speaking competition held in Trinity College on Saturday 2nd March. This challenging competition required participants to prepare a three minute speech on an unseen topic before presenting it to the assembled audience in the Edmund Burke Theatre. Topics were wide ranging, from the environment, travel and health, to social media, education and teenage years.

The students delivered speeches that were well-researched, humorous, engaging and articulate. After a very close adjudication, St. Leo’s were awarded second place in a hotly contested final and the team received a shield and an individual certificate of achievement for their endeavours.

Congratulations to the girls for their exceptionally good team performance and for representing our school so well on the day. The can be rightly proud of their performance and are to be commended for their dedication in committing to so many lunchtime rehearsals.

GOAL – What on Earth Globe 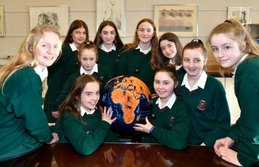 St. Leo’s College GOAL Committee who were recently presented with their GOAL globe

Alan Vard on behalf of GOAL has presented a most beautiful Globe entitled “Who shall inherit the Earth” painted by the very talented Noirin Dodd to St. Leo’s College in honour and acknowledgement of the phenomenal support our school has given to GOAL’s work in developing countries throughout the past 30 years. This is an amazingly beautiful piece of work will be exhibited in a focal area of the school. This presentation was made to Ms. Sheila Coady and The GOAL Committee following the recent GOAL Mile event which raised €750. These funds will assist GOAL’s work with refugees in Zimbabwe. The GOAL committee would like to pay particular tribute to their teacher Ms. Sheila Coady for her dedication to and stewardship of the GOAL committee since its inception in the school.

The Young Social Innovators team from St. Leo’s College met with Minister for Justice, Charlie Flanagan in Dáil chambers on March 7th to discuss their ideas around the important issues of sexual assault/offences and how the voices of victims of rape and their rights need to be better understood in Ireland’s courts system.

This valuable meeting was arranged with the generous assistance of Ms. Aisling Moran whose daughter Alex, is a member of the Y.S.I. team and their YSI coordinator Ms. Sheila Coady. Inspired by the training the team received from the staff of Carlow and South Leinster Rape Crisis Centre and workshops facilitated by Garda Elaine Rowe, team members prepared a discussion document for the meeting with Minister Flanagan. During the course of the meeting the Minister for Justice discussed all points in the document which included questions about the current review by Professor Tom O Malley NUIG on the conduct of trials involving victims of rape and sexual assault.  The findings of this report will be published at the end of this month and will determine if legislative change is required. The team advocated for a significant increase of funding for The Rape Crisis Centres in Ireland, in particular for the work being carried out by the Carlow and South Leinster Rape Crisis Centre through the Knowledge, Awareness and Safety Programme which is facilitated in secondary schools in this region. This education programme is reliant on contributions from participating schools; the centre receives no funding to run the programme.

The Y.S.I. team members are extremely grateful to Minister Charlie Flanagan for affording them this opportunity and in particular for his support of their project aims “to encourage people to speak up and speak out about the issue of sexual assault; to educate teenagers about the meaning of consent and how to manage situations where a person feels uncomfortable or threatened no matter how big or small the situation might be”.

The team will update Minister Flanagan on their progress following their presentation at the Y.S.I. Speak-Out in Lyrath Conference Centre in Kilkenny on March 29th. 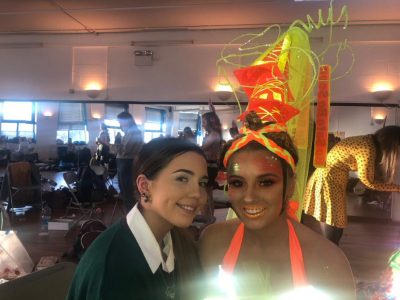 Students Émer Cawley and Beibhínn O’Brien from St Leo’s College Carlow who qualified for the regional finals of Junk Kouture in The Helix last month!

Well done to Transition Year students Cawley and  Beibhínn O’Brien from St Leo’s in Carlow who got through to the regional finals of Junk Kouture in The Helix recently. Both girls have worked steadily on their creation entitled “Queen of the Road” since their return to school last August. They were expertly mentored over the last few months by their Art teacher Tara Gooch. Unfortunately, while the girls didn’t get through to the Grand Final they were delighted to get the opportunity to exhibit their creation promoting the importance of road safety on stage. Emer and Beibhínn are pictured here during their dress rehearsal at the Helix last month. 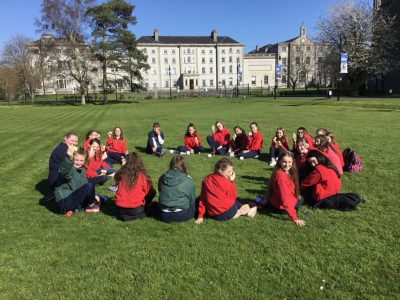