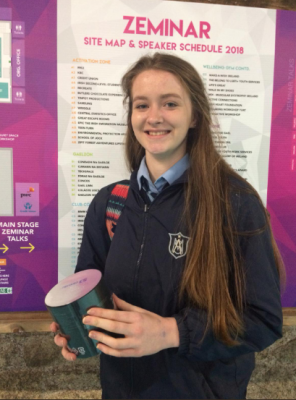 Huge congratulations to Therese Houghton on winning the national ‘Richard Burke TY Personified’ Award for 2018 at the Zeminar event in Dublin.

The prestigious award aims to identify the student who best represents the mission and aims of Transition Year and who has been proactive in fulfilling their own potential by demonstrating personal development including social awareness and increasing social competence and demonstrably increasing their skills base. Also for participating in work experience successfully – proving themselves capable of planning to work and participating in the work place.

Therese’s full and enthusiastic participation in ASM’s Transition Year Program, as well as national initiatives such as Junk Kouture, the Young Social Innovators, Webwise Ireland, and the Concern Worldwide Debates (to name but a few), saw her emerge from the rigorous judging process as the eventual winner of the award.

“We are incredibly proud of Therese on her accomplishment and even prouder to have had two of our students vying for this national award” principal Brid Herbert commented. “Congratulations are also due to Erin Barrett who was nominated in recognition of her achievements as a transition year leas year.

“A huge thank you to all our school community who supported our Transition Year students in all of their endeavours.