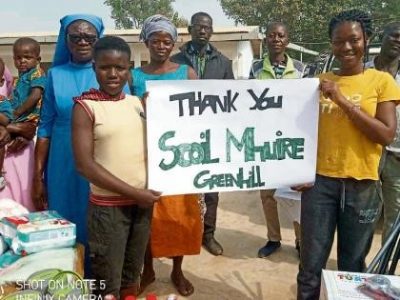 An orphanage for babies and young children in Ghana received a very welcome Christmas present of a large quantity of vital supplies thanks to the fundraising efforts of students from Scoil Mhuire in Carrick-on-Suir who raised €1000 in a matter of days before Christmas. The monies were used to buy a huge range of food, cleaning supplies, electrical goods and even mattresses for the rural based   Sirigu Babies Home in Sirigu in the upper East region of Ghana.

The supplies were purchased and presented to the orphanage by Natifah Coughlan, a transition year student at Scoil Mhuire, and her adopted mother Mary Coughlan, a CBS High School, Clonmel maths teacher, during their two week stay in Ghana over Christmas.

The trip was originally planned as just a holiday back to Natifah’s home country but turned out to be much more due to the generous response of students at both schools to the collection for the babies home where Mary formerly worked as a volunteer.  Funds were also raised in Mary’s school, by members of the Irish language youth club Óg- Ógras Rath o gCormac as well as relatives and friends of Natifah and Mary who all contributed to the collection of €2754.

Natifah was blown away by the generosity of her fellow students at Scoil Mhuire.

“I was so shocked. I didn’t know what to say,” said Natifah recalling the presentation of the funds to her at the end of term just before the Christmas holidays She said the money raised in Ireland stretched along way in her native Ghana as €1 is equal to six Ghanaian cedi.

When Natifah and Mary reached Ghana they set about buying up supplies for the orphanage in local markets and shops. The purchasing took a number of days and the array of goods they bought using the €2754 was staggering.

Natifah said the baby home  they donated these supplies to currently cares for 12 children ranging in ages from seven months to four years old. It is run by nuns with the help of a team of volunteers most of whom are relatives of the residents. It has previously cared for up to 25 babies and young children.

Natifah and Mary met some of the baby home’s young residents during their visit. Among them was the youngest resident seven month old Theresa (pictured above with Natifah). Natifah said Theresa was being cared for at the orphanage because her mother is unwell and unable to look after her. Toddlers Prosper, Francis and Arnold are some of the other residents  who are benefitting from the supplies bought with the funds.

Natifah said Prosper’s mother died when he was a week old and his father visits him at the orphanage.

“Hopefully when he is four years old, he will go back to live with his family. Francis’ mam also passed away and he was very weak when he arrived at the orphanage but he is getting better every day. Arnold’s mother was a secondary school student who died after giving birth,” she explained.

Helping the children   was very personal for Natifah as she once lived in an orphanage called the Next Generation Home at Bolgatanga also in  the north east of Ghana. It was from there that Mary Coughlan adopted her at the age of six while working as an NGO in the former British colony.  Natifah said she and her mam came to live in Ireland in 2018. They are currently staying with Mary’s brother at Shanakill, Rathgormack but are planning to set up home in Kilsheelan.

She says settling into Ireland hasn’t been a huge cultural jump because of the influence her adopted mam has had on her. “Even though we lived in Ghana, it was always an Irish home,” she  said. .

While living in Rathgormack, she has joined the local Comeragh Rangers Ladies Gaelic Football Club. “I never played football  before and it takes a lot of getting use to. I played soccer in Ghana.”

On  her return to school after  Christmas,  she prepared a scrapbook of photos and a written account of her two week stay in Ghana, detailing all the goods they purchased for the orphanage and the presentation of them to the baby home.   The scrapbook is being shown to classes throughout the school. A PowerPoint detailing the trip is being shown in all Religion classes as well.

Scoil Mhuire Principal Brendan O’Dwyer said the generous response of students to Natifah’s  fundraising appeal  for the home showed how well she has integrated into the school in a short space of time.