The fifth annual CEIST Student Leadership Conference took place on Wednesday 20th March 2019. We were delighted that students from almost 80 of our 107 schools attended the event which took place again in the DCU Institute of Education, Drumcondra, Dublin.

The day began at 10am when students were welcomed by Dr Marie Griffin of CEIST and Dr Gareth Byrne, Associate Professor of Religious Education and Director of Mater Dei Centre for Catholic Education, DCU. His Excellency, Archbishop Diarmuid Martin also spoke and thanked so many students and teachers for making the journey to Dublin for the conference.

Students from Sancta Maria College, Ballyroan Emer Molloy and Faith Olorunleke then read the official prayer from World Meeting of Families while fellow student Niamh Coyne lit the CEIST candle to symbolise the light of Christ guiding all CEIST students and uniting us all in one school faith community.

Representatives from the World Meeting of Families addressed the students at last year’s conference and invited them to volunteer at the Papal Mass which took place last summer in the Phoenix Park, Dublin. Chioma Muoneke, a 6th year student of St. Joseph’s College Lucan, gave a wonderful presentation of her school’s involvement in this event. All students were then shown a video made by CEIST which contains interviews and pictures taken from students volunteering at the event. Dr Marie Griffin thanked Chioma and all other students and schools for their help during the Papal Mass and encouraged all students present to get involved in community events where possible. 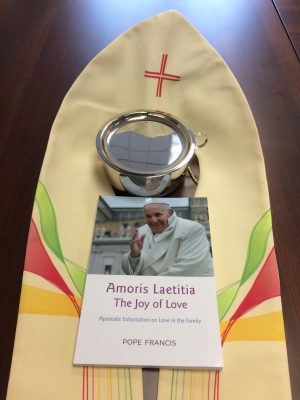 World Meeting of Families memorabilia presented to each school

Students were then divided into smaller groups. Each group was assigned to a different classroom where volunteer teachers presented a workshop entitled “Well-being and Hope in the light of CEIST values”. Student leaders from some of the schools then made their own presentations to demonstrate how they had shown leadership in their own schools.

After a beautiful lunch provided by St. Patrick’s College DCU everyone returned to the main lecture theatre where each school was presented with a gift of two stoles, two ciboria and a copy of the Papal Encyclical “The Joy of Love” kindly given by the World Meeting of Families in thanks for CEIST’s involvement in the Papal mass.

Professor Daire Keogh, Professor of History and Deputy President Dublin City University, then spoke to the students about Leadership and congratulated them all on the work they were doing as leaders in their own schools.

Our Keynote speaker was Minister of State at the Department of Education with special responsibility for Higher Education Mary Mitchell O’Connor. The Minister was welcomed by students from Presentation Tuam, of which she was a former student, and Presentation Secondary School Rockford Manner which are in her constituency. In 1999 Minister Mary Mitchell O’Connor became principal of The Harold Primary School, Glasthule, Co. Dublin, a position she held until her election to Dáil Éireann. She was delighted to find that one of the students who welcomed her was also one of her former students from The Harold Primary School, Glasthule. Minister Mary Mitchell O’Connor spoke to the students about the importance of leadership and also spoke of her ongoing encouragement for equality for women in the workplace. She urged all students to follow their dreams and informed them of the places available for them in further education, apprentices or university once they finish school. She highlighted the fact that she as a woman is in a small minority in Dáil Éireann Her time was cut short due to an important cabinet meeting taking place on BREXIT, but we would not let her leave until we presented her with a bouquet of flowers from Dr Marie Griffin.

Dr Marie Griffin was also presented with a bouquet of flowers on behalf of all the schools present. The flowers were presented by 5th year student Lisa Meehan of Scoil na Tríonóide Naofa, Doon, Co. Limerick. Flowers were also presented to Susan Dwyer of the Institute of Education, DCU St. Patrick’s Campus in thanks for all her help with preparation and organising for the conference.

The day ended with a blessing and prayer from CEIST Member Sr. Assumpta Collins, SCR. A group photo of everyone was taken in front of the CEIST flag. Several students stayed around to get pictures with the CEIST flag also.

The day was a wonderful success and highly enjoyable. CEIST would like to thank all the schools who nominated students to attend the conference as well as the students who attended and presented on the day. A special thanks to all the staff of the Institute of Education, DCU St. Patrick’s Campus for all the help and generosity for providing a venue for CEIST to host this conference. We look forward to another successful conference in 2020.

Please click here to view a copy of presentation given by Professor Daire Keogh, Professor of History and Deputy President Dublin City University.

The below hash-tag was used by CEIST for all tweets relating to the conference.

Click below to see more photos from the day. 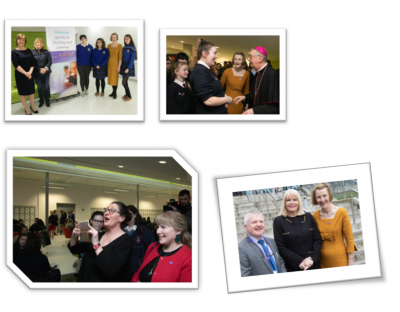