The CEIST Board of Directors is delighted to announce the appointment of Clare Ryan as the next CEO of CEIST. Clare brings great experience and commitment to the role of CEIST CEO, as outlined in her attached biography.

​Clare will take up the position later in the school year. In the interim, Dr Marie Griffin will continue as CEO.

​We wish Clare every success in her new position. 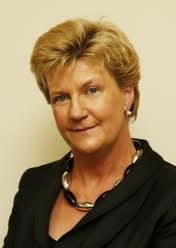 Ms Clare Ryan began her teaching career in Patrician College, Finglas as a teacher of English and French. While there, she also served as Home/School/Community Liaison co-ordinator for five years. In 1998 she was seconded to the DES as National Co-ordinator of the 8-15 Early School Leaver Initiative which was the precursor of the current School Completion Initiative.

In 2001, Clare was appointed as the first lay Principal of St. Leo’s College, Carlow an all-girls’ post-primary school under the trusteeship of CEIST. St. Leo’s College is a thriving school community with a current enrolment of over 1000 students.

In 2006, Clare was seconded as Assistant National Co-ordinator of Leadership Development for Schools (LDS) with primary responsibility for social inclusion. Her main work was developing, preparing and facilitating leadership inservice for newly appointed and established Principals in Primary and Post-Primary DEIS schools.

In 2009, Clare returned to St. Leo’s College as Principal but in May 2011 was seconded once again when appointed as Chief Executive Officer of the National Education Welfare Board. The NEWB is the statutory body charged with enactment of the Education Welfare Act and also has responsibility for the Home/School/Community Liaison Scheme at national level as well as the School Completion Programme and the Education Welfare Service.

Clare returned to St. Leo’s College in 2012. She continues to work as an Associate with the Professional Development Service for Teachers in facilitating inservice for newly appointed Principals, as well as lecturing and tutoring on the Post-Graduate Diploma in Educational Leadership and Management with the National University of Ireland Maynooth.  Clare is also an Associate with Junior Cycle for Teachers (Leadership and Planning) and has facilitated inservice for Principals and Deputy Principals on the implementation of the new Junior Cycle. From 2005 – 2008, Clare was a member of the expert group which developed the National Guidelines on Developing Codes of Behaviour for schools and acted as the DES representative on an EU thematic working group on Social Inclusion and Early School Leaving for three years.

In commenting on her appointment by the Board of Directors of CEIST as CEO Clare Commented:

“As Principal of St. Leo’s College, I have been privileged to follow in the footsteps of selfless dedicated Mercy sisters who worked tirelessly for the young women of Carlow and I know that this sentiment is wholly shared by the Principals and staffs of each of the 107 CEIST schools who similarly honour the founding intention of their schools.  Taking up the role of CEO of CEIST is a natural fit for me as all of my professional career has been firmly embedded in ‘emphasising the dignity and rights of the human person, empowering the most vulnerable in society and enabling young people to become catalysts for social transformation throughout the world’. My commitment to supporting the provision of the highest quality teaching and learning in a most respectful atmosphere will resonate with CEIST schools everywhere as will my practical experience in leading a large Catholic school. I look forward to working closely with all stakeholders in ensuring the values of CEIST are actualised in each of our schools.”