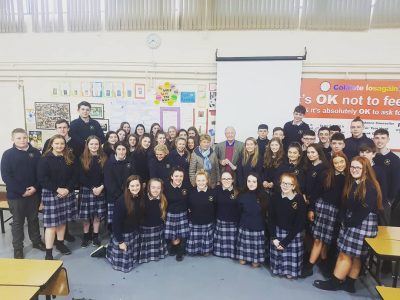 From 10pm Friday November 9th to 6am Saturday morning Transition Year, Fifth Year John Paul 2 and Leaving Certificate Applied students took part in a charity fund raising event in aid of the Midlands Simon Community. Students have raised €2,681 to date for this most worthy cause. Ms Foy and Ms Hooban were the organizers on the night with assistance from Mr Lynch and Mr Heraty.

The students were kept active with sports, games, dancing and singing. Spice bags were delivered around midnight to keep them going. The event was a huge success. Students presented members of the Friends of Simon Fundraising team with the cheque on Wednesday 21st of November.

Below are some Photographs of the TY, LCA and JP 11 Students on the night of the Stay Awake

As we all know 2018 marks the Tercentenary of the Birth and Nano Nagle and thus is a significant year for the Presentation Family. Those of us familiar with Mount St. Anne’s in Killenard, Co. Laois are well aware of the beauty of this special place which serves as a Retreat and Conference Centre and is run by the Presentation Sisters. The management committee under the stewardship of Sr. Elizabeth Maxwell thought it would be a good idea to invite Coláiste ĺosagáin, Portarlington, the local secondary school which is a CEIST school in the Presentation and Christian Brothers tradition to be involved in a project which would help foster links between the school and the Retreat Centre and at the same time mark the Tercentenary in a special way. After some discussion it was agreed that students from the school’s Leaving Certificate Applied programme would work on a garden project in the grounds of the Centre. Coláiste ĺosagáin, Portarlington has a flagship Leaving Certificate Applied programme which incorporates an Agriculture/Horticulture element started by Geraldine Walton and ably continued by local teacher Keith Bracken.

Fittingly the students and their teacher started work on the eve of Presentation Day, November 20th. Murphy’s Law meant that the students had to do their work on one of the wettest days we have had in recent months but the determined students did not let the inclement weather put them off. However, the poor weather conditions were off set by the warm hospitality we associate with Mount St. Anne’s and the hard working students and Mr. Bracken were ‘fed and watered’ by the kind staff in Killenard.

The work is near completion and we look forward to seeing the fruits of the students’ labour soon.

The names of the students involved are: