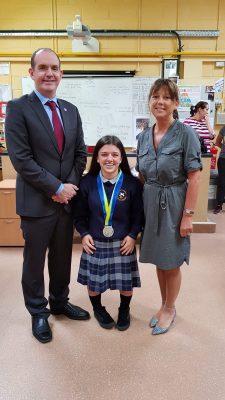 Nicole Turner is one of the youngest members of the Senior Irish Paralympic team at just 16 years of age.  Nicole started swimming at the early age of 5 and not long after joined the Pirhana swimming club in Portarlington, where she trained for  7  years.  Nicole then moved on to train with the Laois Marlins needing more pool time and stayed there until March 2017, where she started training in the National Aquatic Centre in Dublin as she needed again more pool time.  Nicole travels up to Blanchardstown every single day after school, and twice on a Saturday from Portarlington , eating her dinner in the car and not getting home till about 9pm.

Nicoles first intertnational success was in 2015 in  Sheffield , when she won a silver medal in the Youth category at the  British International in the 50 metre butterfly for Ireland.

Nicole then went on to Glasgow in 2015 to compete in her first major senior international championship, the IPC Swimming World Championships.  She competed in 6 events , making the final of each and setting a new lifetime best in every single one. 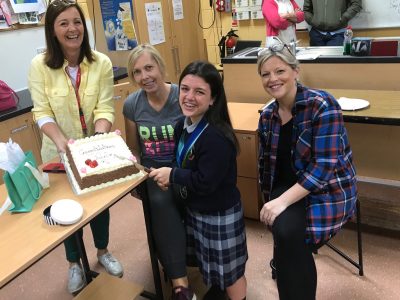 In Madeira in Portugal  in 2016, Nicole represented Ireland in the IPC European Open Championships, where she swam in 6 finals, bringing home silver in the 200m individual medley and the 100m breastroke as well as a bronze in the 50m butterfly.

At her first Paralympic games in Rio de Janeiro Brazil, Nicole qualified for the final in 5 events, and succeeded in setting personal best times in 6 out of her 10 races and came 5th in the 50m butterfly at only 14 years of age. Nicole was the youngest member of team Ireland in Rio, and was chosen as flag bearer to lead the team into the closing ceremony. 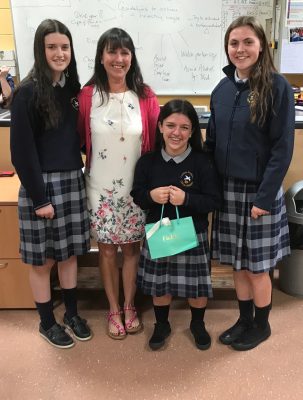 Most recently this August, Nicole claimed Ireland’s first silver medal of the World Para Swimming Allianz European Championships in the 50m butterfly, at home in Dublin in the national Aquatic Centre where she trains.  She also reached the final in all of her 6 events.

Nicole is now looking forward to travelling to Japan in October, in order to train for the 2019 Worlds in Malaysia next  July which will be good preparation for the Paralympics in Tokyo 2020, when Nicole will still only be 18 years of age.!

Nicole is currently in Transition Year in Colaiste Iosagain Portarlington, where her fellow classmates celebrated all of her achievements last Friday and got to see her Worlds silver medal.  Nicoles mam Berni described to the students the dedication and hard work involved in Nicoles training and all this while Nicole was studying for her Junior Certificate.  Nicole is a fantastic role model for her fellow students, and living proof that hard work pays off and that we can all achieve out dreams.  Well done Nicole, we are all so proud of you and the very best of luck in the upcoming world championships where we will all be rooting for you .