Where memories are made

Seeing the joy created from volunteering makes it all worth it, writes Emma Meehan 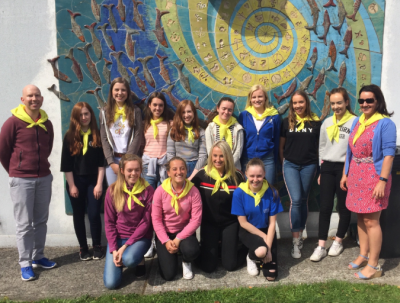 On August 25, as part of a CEIST school initiative, 12 fifth year students, accompanied by their teachers, Mr Jason Cotter and Mrs Tina Johnston, had the privilege of travelling to Dublin to volunteer at the Papal Mass in Phoenix Park. Prior to the weekend, there was much preparation during the school year where we attended meetings which gave us an insight into what our voluntary roles would involve, getting Garda vetted, taking our ID photographs and filling out forms so we were more than ready for our travels to begin!

We travelled by private coach on the Saturday morning before the Papal Mass and arrived at St Joseph’s secondary school in Lucan, which was where we would be staying for the night. After a warm welcome by all of the staff and students at a lovely group assembly, we were then given a full tour of their school campus. The school catered for our every need, with a shop full of snacks, teas, and coffees available at the entrance and a room full of board games. We were in our element! 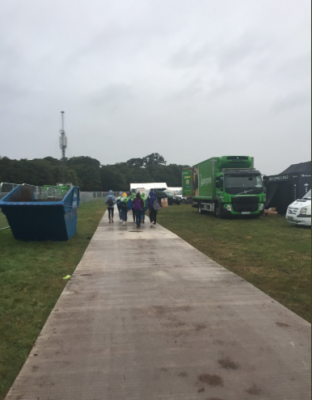 After getting settled in, one of the students from the school informed us of the itinerary for the day. Firstly, we were led to a beautiful church very close to the school. One of the local priests spoke to the volunteers and showed his immense gratitude to everyone for taking time out to help at the weekends’ event. Shortly after the prayer service, we made our way to Phoenix Park for our final training session.

We were very fortunate to be a select few who got the opportunity to see the venue being set up. The place looked phenomenal! There were fairy lights surrounding the walkways and the choirs singing beautifully as they practiced for the big day ahead. The atmosphere was already surreal. We just could not wait for the following day to commence.

After our training sessions, we all returned to St Joseph’s secondary school for the night. After a meal in the school canteen, we had the choice of playing ping pong, board games or taking part in the very popular table quiz. Everybody was in such great form and we really enjoyed our night. Lights went out at 11pm and it seemed no length until we were awoken by alarm bells ringing at 4.30am, bright-eyed and bushy-tailed as you can imagine!

Our coach driver met us outside the school and we travelled to the West County Hotel, and from there, despite the torrential rain, we made our way to Phoenix Park. It was about 6am when we arrived, and the rain was pouring down so we quickly made our way to the chapel which had been allocated to our group. Our group rested in here for an hour or so until a group of about 15 people from Co. Wexford came to join us. 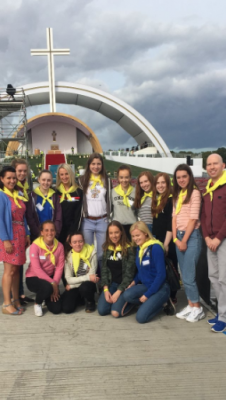 Many new friends were made with our fellow volunteers. With the morning passing very quickly, we began to set up the chapel for the papal Mass. We arranged the tables and got the place set up for the Eucharist.

Following this, a priest from Sligo said Mass and consecrated the Eucharist. After Mass, we went outside to have a wander around the grounds. Pilgrims began to gather at about 9am, and they were all in such good spirits in anticipation of the papal Mass. Our day was spent assisting the many pilgrims with their queries and we had the pleasure of meeting so many lovely people, many of whom had travelled very far to attend the Mass.

There were many trucks at the back of the park serving refreshments to keep everyone satisfied. Even though the morning was miserable, everyone who arrived at Phoenix Park appeared to be so happy and excited for the day that the weather did not really matter. The atmosphere was absolutely brilliant.

Throughout the morning, prior to the arrival of the Pope, entertainers including Daniel O’Donnell, Derek Ryan and Eimear Quinn and many dance groups kept the crowds entertained. At approximately 2.30pm, the Pope arrived and was escorted around the park in the Popemobile. The joy and happiness that could be heard and seen was so heart-warming it made our voluntary work very much worthwhile.

During the papal Mass our role involved holding large umbrellas next to the many priests and eucharistic Ministers during the distribution of Communion. As expected, the papal Mass was so beautiful and we were so proud and privileged to be attending such a special event in the midst of Pope Francis. 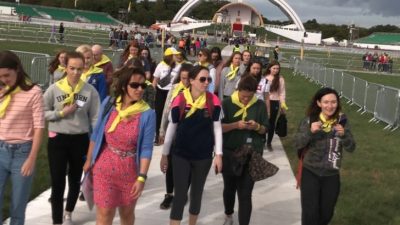 The people, the music, the atmosphere and of course most importantly the papal Mass itself made our weekend of volunteering very special. It was such a great honour to be involved in the Mass. The more we give, the happier we feel. Volunteering increases self-confidence. By volunteering, you are doing good for others and the community, which provides a natural sense of accomplishment. Your role as a volunteer can also give you a sense of pride and identity.

For this reason, I believe that if any of us got the chance to volunteer again, we would seize the opportunity in a heartbeat. As a group, we enjoyed it immensely and will hold the memories close to our hearts for the rest of our lives!