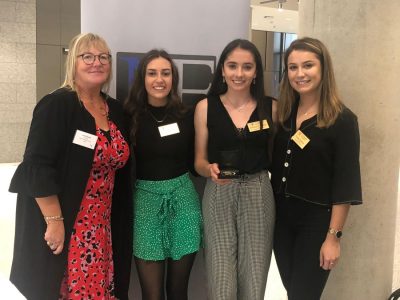 Congratulations to Cáitríona ní Ríordáin from Coláiste Muire, Ennis, who was awarded a Naughton scholarship this year. This is the third year in a row a student from Coláiste Muire has received the award for County Clare. Pictured above at the 2019 awards in TCD Business School with Ms Pound, Principal are Cáitríona ní Ríordáin 2019, Fiona Neylon 2017 and Róisín Mc Ateer 2018.
Caitriona is studying Chemical & Process Engineering in UL, Fiona is studying Biological & Chemical Sciences in UL and Róisín is studying Science in UCD. 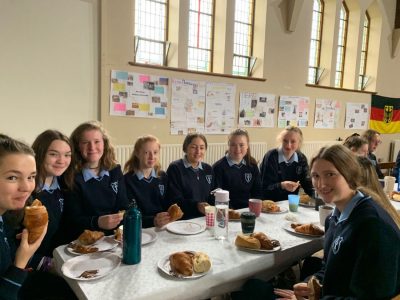 A French and German breakfast to celebrate European Languages day was held for all Transition year classes on September 26. Students had worked on projects which focused on a cultural aspect of a French or German speaking country. The old convent chapel proved a lovely venue for the breakfast for the 120 language students who enjoyed croissants, pretzels, cheese, ham, bread and of course the universal nutella! 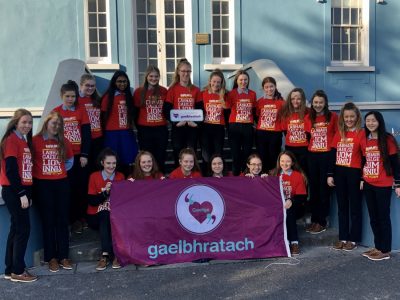 This year’s Musical in Coláiste Muire was Miss Saigon. It was a magnificent production and a credit to all those involved. The cast was huge with students from two year groups, both the Transition year and Fifth year, taking part. The sets were beautiful and were the result of Ms Niamh Hickey’s hard work. Students were involved with painting sets and working as set crew, while staff and parents helped out during the busy week of the show, working backstage. The Parents’ Association provided refreshments for the cast each night and each and every performance was sold out. The musical director was Michael Hennessy and the producer Sarah Griffin. 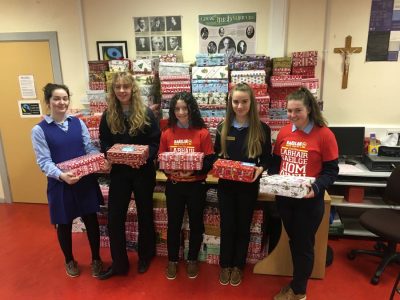 Pictured above are some of a group of Transition Year students who along with teachers Ms Hooke, Ms Harrold and Ms Mc Guane, worked hard over the last couple of weeks gathering shoeboxes and filling them with presents, as part of the Team Hope initiative for children in need this Christmas. The group managed to collect an impressive 402 shoeboxes in total. 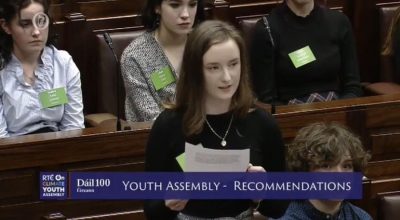 Áine Dempsey a Leaving Cert student from Colásite Muire, pictured above while speaking in Leinster House on Friday November 15.  The RTÉ Youth Assembly on Climate, comprising 157 young people, between 10 and 17 years, from all over Ireland gathered in the Dáil to discuss the climate crisis and look at solutions. The delegates included Coláiste Muire students Áine Dempsey, Kate Harty and Rose Guy who represented Clare in the Dáil. Áine later appeared on the Late Late show as one of her recommendations was adopted by the assembly.

The following statement was issued by the delegates:

“We, the youth of Ireland, call on our elected representatives and on adults to listen. We put forward our recommendations for action to stop climate breakdown. We are NOT experts. In our recommendations we offer ideas but we do NOT have answers. It is a starting point for adults and particularly for those elected to protect and progress our society. We call on you to listen to the science, to take on board our Recommendations and to work on our behalf to ensure that we – and you – have a future.”

Coláiste Muire win the All Ireland Senior A Volleyball 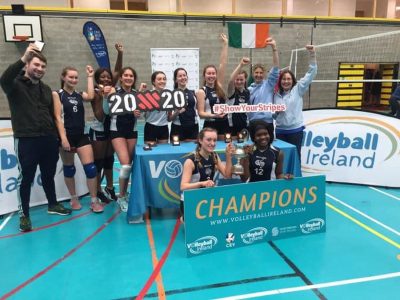 In a thrilling final on Thursday December 12 in the UCD Sports Centre Coláiste Muire retained their All Ireland title winning against Rockford Manor Dublin 3 sets to 2. 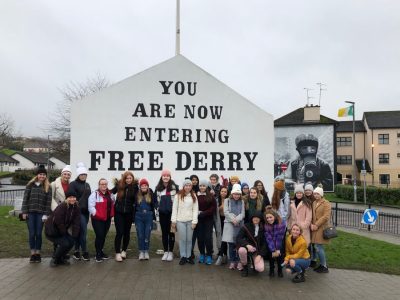 50 senior History students travelled to Derry recently and visited the city from a historical point of view.  They visited among other sights, the walls of Derry, the Bogside murals and the Apprentice Boys’ Memorial Hall. Thanks to Ms Hooke for organising the trip and to the History teachers, who accompanied the group.