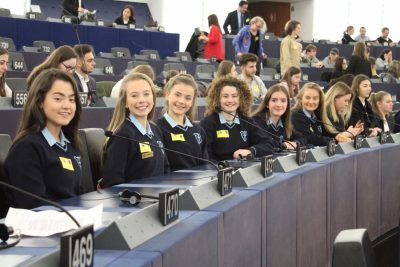 In March this year a group of Coláiste Muire Transition Year students visited the European Parliament in Strasbourg as part of their Euroscola Video Clip competition prize.

In this year’s Euroscola competition students had to create a one-minute video clip on ‘My EU Election Campaign’. One winning school was selected from each of Ireland’s three European constituencies.

Students were asked to take their inspiration from the big democratic advances of 1918, when women in Ireland won the right to vote, and for the first time a woman was elected to both Dáil Éireann and the House of Commons. Standing as a candidate in the next EU Elections students were asked to describe the issues most important to them.

The winning students travelled to the European Parliament in Strasbourg and experienced a day as an MEP. They joined their peers from across Europe and discussed topics of interest to Ireland in a European context with their peers from other member states and members of  Parliament. 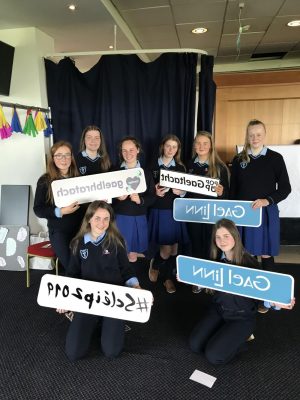 Gael-Linn oversees the Gaelbhratach in schools in partnership with Conradh na Gaeilge. The aim of this scheme is to encourage and enable schools to promote Irish in a planned, ongoing, enjoyable way. All TY Irish classes were involved in this initiative throughout the year.

Edel Ní Bhraondín from Gaelbhratach met with the Coiste (Committee) on Mon 5 Dec. Gaeilge 24 took place on 13 Nov. 340 schools and 32,000 participated nationwide. In Coláiste Muire, 32 TY students endeavoured to speak Irish for 24 hours. This was supported by many teaching staff. Students wore t-shirts and badges. Other activities included an Irish Breakfast morning and refereeing a volleyball match through Irish.

A Club Gaeilge was set up and was open each Thursday at lunch time. Transition year classes taught First Year classes some céilí dances and Irish songs.

A Bord Quiz, Ceolchoirm and Seanchaí were among some of the events organised during Seachtain na Gaeilge. Well done to the coiste who worked so hard on the promotion of Gaeilge during the year. Their efforts were rewarded with the presentation to Coláiste Muire of the Gaelbhratach – Is fiú agus is féidir! 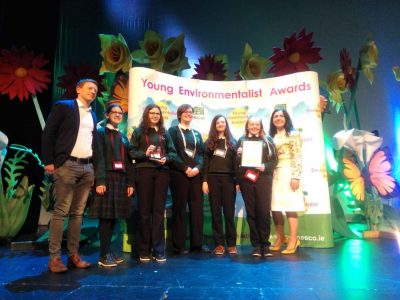 Coláiste Muire Young Environmentalists were the Overall Junior Winner at the EcoUnesco Environmental Awards in the National conference Centre in Dublin recently.

This award is the culmination of a sustained effort on the part of these young environmentalists who have worked hard throughout the year on Biodiversity. Their work this year has included holding talks in school to help with their pollinator plan, planting flowers, creating new wildlife habitats and organising a tree planting day in orchards around the town.

They worked with the student council to change people’s habits around plastic consumption and succeeded in implementing a school wide plastic ban. They set up social media accounts and used poster campaigns and a stall in the school canteen to raise awareness at every stage.  They addressed the politicians in the local Council Chamber and proposed several changes and are continuing to follow through on the action points. 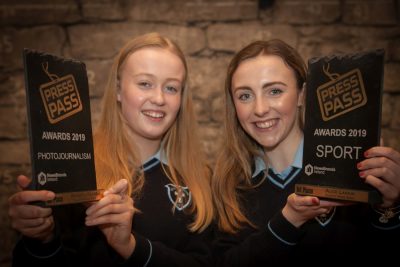 The popular competition element of the Press Pass Programme drew hundreds of entries from across the country with students entering original pieces across five categories – News, Opinion, Features, Sport and Photojournalism. Rebecca’s entry was in Photojournalism while Alice’s entry was in Sports Journalism.

Over 10,000 Transition year students took part in the Press Pass Programme, which develops news , literacy and critical thinking skills while helping students to develop a deeper understanding of  news media and how it communicates about the world around them.