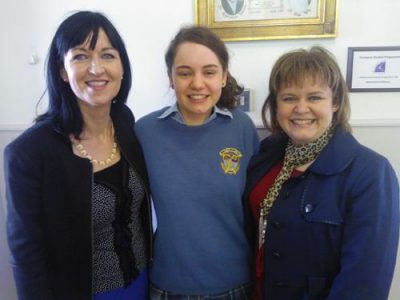 Congratulations to Emily O’Brien, Transition Year student of Mercy Secondary School Kilbeggan, Co. Westmeath who has attained a much sought after scholarship to Germany in the coming summer.

Emily hails from Castletown-Geoghegan and is the daughter of Sandra and Enda O ‘Brien.

Emily achieved one of the top results in German in the country in her Junior Cert and is now one of only five Irish students to have obtained this scholarship.

She is also captain of Mercy Kilbeggan’s German Debating Team who are set to meet St. Killian’s Deutsche Schule in the National Semi Finals of the German Debating competition on Friday.