Irish paper ticks all the right boxes in Gaeltacht school 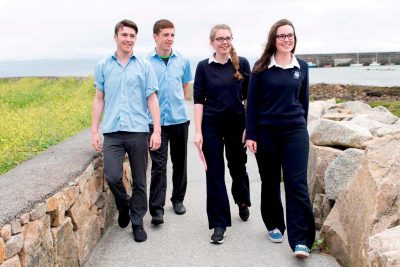 Students at Coláiste Chroí Mhuire, An Spidéal in Galway were delighted with the Higher Level Irish Paper 1 as the exam failed to throw any curveballs – apart from a lack of sport.

A total of 30 students out of the 170 pupils attending the Gaeltacht school sat the first Irish paper yesterday, with only one or two opting not to take the higher level option.

Evan Coyne (17) from Moycullen revealed he was happy with the first Irish Higher Level Paper, even if the expected sport question failed to make an appearance.

“It was very nice, I liked it a lot. I was hoping sport would come up. It didn’t but I was happy with the short story,” he added.

His classmate Ruadhán Ó Curraoín (18) from Spiddal, who hopes to study in Mary Immaculate in Limerick, was also relieved. The native Irish speaker said: “It was easy enough. Everything that we had prepared for came up.”

Méabh Ní Dhonnacha (17) from Baile na hAbhann, said she had plenty of time to complete the paper.

“Everything that came up we had covered. It had 1916 and young people issues, there was no sport but I wasn’t going to do that anyway,” she said.

Sarah Casburn (18) from Moycullen said the exam had left her confident about the next Irish paper.

“There was nothing really surprising at all. It was the one I was least worried about and I’m more confident going into the next one,” she added.

“There was a wide range of topics from 1916 to youth culture, international problems and issues from throughout the year. It’s a very, very nice paper. There isn’t really anything I wouldn’t have been happy with,” she added.

Students at the school were also more than happy with the Maths Higher Level Paper 2. Daniel Faherty (18) from Moycullen and Niall Cox (17) from Furbo were delighted to have both maths exams behind them with no nasty surprises.

There was a sense of déjà vu about Leaving Certificate Irish Higher Level Paper 1 which featured topics that had appeared in the ‘mocks’, and subjects students would have prepared for the orals. Essay titles were a perfect balance, providing both a challenge for high-achieving students and being accessible to all, said teacher Ruth Morrissey of St Michael’s Community College, Kilmihil, Co Clare and the TUI. The essays included what Ms Morrissey felt was an obligatory topic this year: 1916. “Their hearts lifted when they saw it”, she said.

At ordinary level, Ms Morrissey said there was also a correlation between the topic prepared for the orals and what appeared on the paper. All in all she was “very happy” even if there were “one or two tricky questions on the tape”.
Robbie Cronin of Marian College, Ballsbridge, Dublin and the ASTI, regarded the questions in the ordinary level listening as “quite difficult”.

“My students said this part of the exam was very difficult.” At higher level, he said the listening comprehension questions were “as you’d expect.”

He said some students had difficulty with the word ‘aiféala’, which means regret.

However, he said the written comprehensions were not difficult with plenty of essay choice.

(article and photo courtesy of the Irish Independent)