The Faces behind the Masks – Our First Years 20/21

Our First years 2020 made history commencing secondary school this September wearing masks and following national guidelines and restrictions. The transition to secondary school is on its own a giant leap in their lives, and these resilient souls did it during a pandemic. Overcoming the barriers to freedom, communication and interaction, they have adapted seamlessly through the first term, establishing themselves among our school community with resilience and vigour. This is a true example of where, we can learn so much from our students. It is a privilege to have you all on board and we wish all our First years of 2020 continued success in their future years with us. 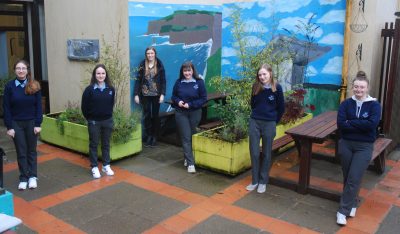 For the first time in its history, the BT Young Scientist & Technology Exhibition will be turned into a virtual exhibition. It will be held on a new interactive BTYSTE platform in January which will also bring the exhibition to new audiences, far and wide. We hope that many past pupils for Mary Immaculate Secondary School will visit the site and look at the work being done by some first year students at Mary Immaculate.

The work is progressing with students working on projects throughout the Burren area. The projects that will be competing in January were among the 550 projects that were selected from over 1300 entries. This will be the first time that John Sims will not be at the RDS since he mentored his first project back in 1990. However, he is mentoring five first year students for this years virtual young scientists.

The projects taking part in the exhibition are: Oisín Jackson: An investigation into the differences in height of adjoining clints, Ciara McDonnell: House searching by hermit crabs, Ella Mooney: Does the level of nutrients in seawater affect the abundance of Ulva lactuca?, Anna Mae O’Driscoll: Is visitor footfall affecting lichen growth on limestone pavement in the Burren? and Fionn Rush: Does the availability of food affect the movement of periwinkles (Littorina littorea)?

More information on the event will be put up on the school website between now and the exhibition. 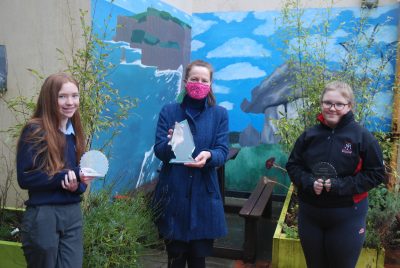 Congratulations to Alice Davoren and Emily Cullinan on winning the THEA Award at the National Finals of SciFest. They received a trophy and €75. The award is sponsored by the Technological Higher Education Authority. We are very proud of you both and well deserved for all your hard work. The event this year was online and the awards were announced in November.

It was the culmination of a busy year for these two girls. They were highly commended at the 2020 BT Young Scientist and Technology exhibition. They then entered the ECO-UNESCO Young Environmentalists and won the Junior water section. They had also entered SciFest at LIT Moylish. Here they won a number of awards and gained entry to the SciFest national finals.

The abstract of their project was: “In summer 2018 there was a hosepipe ban in Ireland. People were advised of methods to keep their plants alive. One of the methods was to use greywater to water the plants. Because a lot of greywater contains cleaning chemicals, we wondered if it had an effect on the soil, the plants growing in it and the earthworm population in the soil. We carried out our research in two parts. Firstly, we did research in a field near Gort. Secondly, we carried out research using barley seedlings in the school lab. We did not find that greywater affected the nitrate, phosphate and potash levels of the soil much in the field trials. However, there were some changes in pH in these trials. With regard to our laboratory trials, we found significant changes to pH, nitrate and potassium levels. There were no changes in phosphates levels. With regard to earthworms in our field trials, we found that every quadrat that was not treated with the greywater contained earthworms. Only two of the treated quadrats contained earthworms. We noted that these earthworms were a greenish colour unlike the ones in the untreated quadrats. We also noticed that the texture of the treated soil was different to that of the untreated areas, both in the field and in our lab trial. Our investigation of the effects of the greywater on the growth rate of barley seedlings was inconclusive as only a small number of our seedlings germinated.”

Transition Years are very busy making Beautiful Upcycled Christmas Tress out of old Pallets. This is one of the many business ventures Transitions years are involved in on the approach to this festive season working on the theme of sustainability. They will be selling these beautiful unique creations at their very own Transition Year Christmas Fayre on the week prior to our Christmas Holidays. Well done our ingenious TY’s 2020.