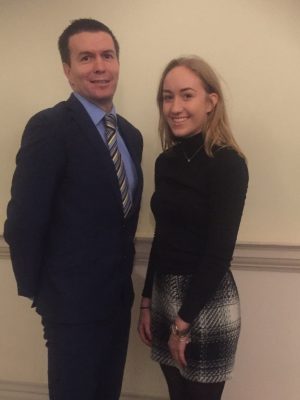 Pictured is Tara McNally, a recent past pupil of Our Lady’s Castleblayney who was awarded a prestigious scholarship to Trinity College Dublin. She is seen here being congratulated by Our Lady’s Principal, Mr Eddie Kelly

Congratulations are extended to Tara McNally, a recent past pupil of Our Lady’s Secondary School Castleblayney who was awarded a scholarship to Trinity College Dublin. These prestigious Scholarships are awarded to students who have achieved excellence in their Leaving Cert results.

Tara who is studying Business, Economics and Social Science was presented with her award at a ceremony in Trinity College, which was attended by Our Lady’s Principal, Mr Eddie Kelly. Speaking in the school during the week, Mr Kelly extended his congratulations to Tara, “Tara was a wonderful role model during her time in Our Lady’s. She is a wonderful ambassador for Our Lady’s and is a credit to herself and her family. I am quite sure she will make a wonderful contribution to Trinity and she carries the good wishes of the entire school community at Our Lady’s”.

Microsoft Awards on the double for Mai & Our Lady’s

Congratulations, on the double, to Our Lady’s Castleblayney on receiving two prestigious National Awards from Microsoft, one being an individual award to a student, Mai Witthoff and the second being a school-based award.

Billy Breen Ireland country Manager for Prodigy Learning visited Our Lady’s on Thursday November 22nd to make two presentations.  First up was Mai Witthoff, Transition Year student who beat all entrants from Ireland and the UK in her MOS exam and will now represent Our Lady’s and Ireland in the MOS Four Nations Competition final in London on June 14th 2019.  She received a set of Beats headphones from Prodigy Learning as part of her prize.  A wonderful achievement for Mai!

The school itself was named a Microsoft Office Centre of Excellence
in recognition of the number of its students achieving Microsoft Office Specialist
certification in the school year, 2017-2018. The Microsoft Office Specialist Programme is the world’s most recognised computing qualification for proving a person’s skills and abilities in Microsoft Office Applications. MOS co-ordinator in Our Lady’s, Ms Kathryn Clarke expressed her delight at both awards, remarking “it is a wonderful opportunity for all Transition Year students to do the MOS Module and gain invaluable IT skills. We are all delighted with Mai’s success and wish her every good wish in the competition in London”.

Principal Mr. Kelly commended the dedication of the school’s ICT teachers for adopting the Microsoft Office programme. “We are extremely lucky to have staff that are fully committed to developing the students’ interest in ICT and embracing the benefits of technology in education by ensuring that our students are fully prepared for third level education and future employment”

Well done to all concerned. 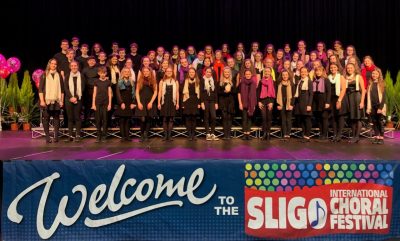 Pictured is Our Lady’s Choir who won the Youth section at the highly competitive Sligo International Choral Festival last week, a week after being crowned Showchoir champions in Dublin.

Huge congratulations to Our Lady’s choir, who hot on the heels of becoming National Showchoir Champions, are experiencing more National success with a win in the Youth Choir section at the very competitive Sligo International Choral Festival. Success breeds success, they say!!

This annual festival is one of Ireland’s top choral festivals, and sees choirs from all over Ireland and abroad converge on Sligo to compete in competitions in a dizzying array of musical styles. There are all sorts of choirs – male, female, mixed, youth, large and small – singing everything from sacred music to barbershop. Competitions are hotly contested and there is invariably some wonderful singing to be enjoyed.

Our Lady’s choir competed in the Youth section on Friday 16th with a new programme of music from their last competition and they started the day with a vocal workshop with over 500 other competitors under the guidance of Jonathan Davies Wright, a renowned gospel choir director. In the afternoon they performed in the Knocknarea Arena to a panel of 3 judges including Britain’s Got Talent conductor, Veronica Mc Carron. Their performance was outstanding with comments from the judges including: “beautiful voices, expressive and committed”.  Special compliments were also awarded to the musicians accompanying the choir, Laura Christie, Roisin O’Sullivan & Vincentas Ajauskas as many choirs hired in professional accompanists. Our Lady’s were awarded 90 marks, the top in the competition section and were presented with a specially commissioned trophy. A huge well done to Music teacher, Ms Cara Murray and her talented charges! Speaking at the school during the week the Principal Mr. Kelly congratulated Ms. Murray and the choir on yet another outstanding achievement. He acknowledged ‘the outstanding commitment and dedication made by Ms. Murray in preparing the students to such a high standard and that the students’ success is a just reward for all their hard work and efforts.’

Prestigious Ulster Colleges All Star Award for Our Lady’s Castleblayney 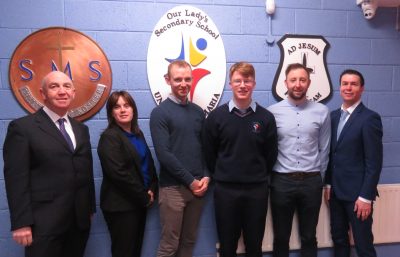 Gaelic Games in Our Lady’s Secondary School Castleblayney received a great boost when it was announced that Robbie Hanratty was selected on the Ulster Colleges All-Star team of 2018, the ultimate individual award in Ulster Colleges football. Robbie attended an initial trial in Cookstown on Thursday December 6th and was selected to compete in a final trial game last Wednesday December 12th in Belfast. Throughout both games Robbie displayed his excellent footballing skill and ability, with his high fielding and shooting from distance impressing the selection team. On Friday morning there was great excitement in the school when it was announced that Robbie had been selected on the Ulster Colleges All Star team for 2018.

Robbie is the son of Colin and Annette Hanratty and he plays his club football with the Castleblayney Faughs club winning numerous underage titles. Robbie has been a member of Co. Monaghan Development Squads and was a part of the Monaghan U/17 team that won a league and championship double last summer. Robbie is the joint captain of the schools Senior Boys GAA team that have recently qualified for the MacLarnon Cup quarter final.

This is Our Lady’s tenth Ulster Colleges All-Star award and indeed their eighth award from 2006. Speaking at the school during the week Principal Mr. Kelly, who also coaches the Senior Boys football team along with Mr. Bishop and Mr. Mc Carville, congratulated Robbie on his outstanding achievement ‘this is a fantastic honour for Robbie and our school and one of which we in Our Lady’s are justifiably and extremely proud. Robbie has and continues to be an excellent ambassador for Gaelic games in the school and is a great role model for the younger players in the school. I am delighted that the skill and commitment that we see on a daily basis has been recognised at such a prestigious level and I have no doubt that with continued hard work and application that Robbie has a great future ahead of him in Gaelic Games. The high levels of success we have enjoyed in GAA in recent years is a testimony to the talent and ability of our students but also to the great work done by all teachers involved in coaching & promoting Gaelic Games’ 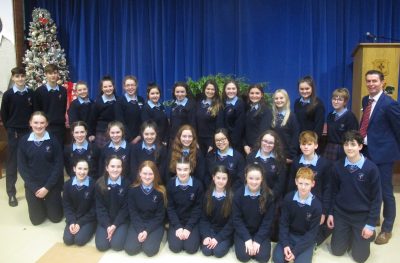 Pictured in Our Lady’s during the week is the group Spraoi with Principal, Mr Eddie Kelly. This talented group of students under the stewardship of Music teacher, Ms Cara Murray received the news that they would represent Ireland in the internationally renowned Llangollen Music Eisteddfod in Wales in July.

Our Lady’s Secondary School Spraoi to Compete on World Stage

Spraoi from Our Lady’s Secondary School are celebrating after being recently notified they have been selected to represent Ireland at the prestigious Llangollen International Musical Eisteddfod in Wales, United Kingdom.

The Llangollen International Musical Eisteddfod is one of the foremost world festivals of music, dance and culture, and includes competitions showcasing choirs and dance troupes from across the globe.  Each year it attracts over 4,000 performers and as many as 50,000 visitors across the week (1st-7th July 2019).

Established in 1947, the International Eisteddfod promotes peace and goodwill between nations by bringing performers from all cultures and nations together through music. The festival is world renowned, having welcomed international music stars including Luciano Pavarotti who competed in the competitions as a boy and returned to perform as one of the most successful tenors of all time.

This year, Spraoi will join international competitors from all over the world in a vibrant carnival of culture and will compete in three different categories.

Music Director of the festival, Edward-Rhys Harry, said: “It is a real honour to welcome our competitors to the beautiful town of Llangollen and give them the opportunity to perform on the festival’s famed Royal Pavilion stage. They should be really proud of this achievement, it is a unique opportunity to enjoy and celebrate. We wish them the very best of luck”.

Music teacher at Our Lady’s, Ms Cara Murray was delighted with the news and said ‘the students are delighted with the challenge and are already excited and talking about getting ready for Wales. I am thrilled for them and look forward to working with them, they are a very talented, hard-working group of students’.