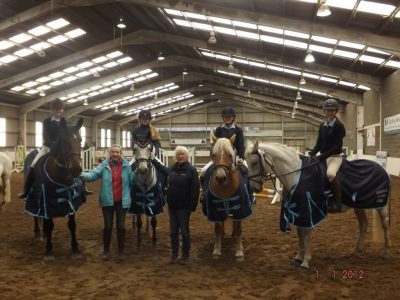 Well done to Our Lady’s equestrian team who won the hotly-contested first leg of the Inter-school’s competition in Killossery Lodge Swords on Sunday 30th September. Of the thirteen teams to start, only 4 teams completed the first two rounds on a score of zero faults. This resulted in a 4 way jump-off against the clock with the fastest clear round to win the prize. Two riders were nominated for each remaining team.  For Our Lady’s, we had Sophie Moore on Cindy who jumped a fabulous clear in the fastest time of the day, followed by Grainne Lacey on Silver Lacey who was the last rider to jump and dealt with the pressure to give us a clear round, which resulted in Our Lady’s winning the competition.

Many thanks to all who travelled to support the team, and thanks too, to James Kernan who trains the team on Monday evenings in Crossmaglen. As we look forward to the next competition in the same league, we are now the team to beat!

Record-breaking in Our Lady’s

Monday 8th October in Our Lady’s saw a group of students, led by the Coiste Gaeilge, take part in a world record breaking attempt at the longest Comhrá as Gaeilge. This initiative is run by Conradh na Gaeilge and forms part of the programme for Bliain na Gaeilge. As the students gathered to participate in this record-breaking Comhrá, the aim was for 172 hours of chat as Gaeilge right across the country with the deadline being Sun 14th.

Gan dabht,ceol, comhrá agus craic was had by all. 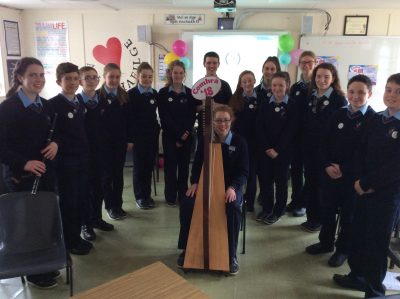 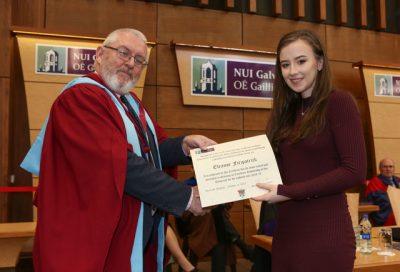 Pictured at the presentation of Excellence Scholarships in NUI Galway is Eleanor Fitzpatrick who was the recipient of this prestigious award, having achieved excellence in her Leaving Cert 2018. Eleanor is a past pupil of Our Lady’s, Castleblayney .

Congratulations are extended to Eleanor Fitzpatrick, a recent past pupil of Our Lady’s Secondary School Castleblayney who was awarded an Excellence Scholarship to NUI Galway. These prestigious Scholarships are awarded to students who have achieved excellence in their Leaving Cert results.

Eleanor, daughter of Thomas and Bríd Fitzpatrick, Anney, Latton PO, Castleblayney is studying International Arts and was presented with her award at a ceremony in NUI Galway. This Excellence scholarship brings with it a monetary sum of €1500. Speaking in the school during the week, Mr Kelly extended his congratulations to Eleanor, “Eleanor was a wonderful role model during her time in Our Lady’s and among the many awards she secured at the end of her 6 years was Student of the Year nominee, Excellence in English, Excellence in Physics and Senior Art Award winner. She is a wonderful ambassador for Our Lady’s and is a credit to herself and her family. I am quite sure she will make a wonderful contribution to NUI Galway and she carries the good wishes of the entire school community at Our Lady’s”.

The activities for the week were organised in the main by The Amber Flag Committee, a group whose focus throughout the year is on positive mental health in the school. First up was a visit to Iontas by 5th Years to the launch of Positive Mental Health week by Heather Humphreys, Minister for Business, Enterprise and Innovation. Second Years took part in ‘Drop everything and Walk’ throughout the week while 1st Years had a jiving contest led by jiving twins, Katelyn & Killian Finnegan. Christy Bannon, an ambassador with Cycle Against Suicide, visited the school and spoke to 3rd Years about getting rid of the stigma around mental health and was delighted to receive a cheque for €650, the proceeds of a Healthy Eating Cookbook put together by a 5th Year student, Conor Brady. Members of the Amber Committee visited 1st Year Wellbeing classes, engaging with them on the topic and how to maintain positive mental health. There was also a trip to The Garage Theatre to see ‘Cracks’ and the week came to a resounding climax on the Friday with a teacher fancy dress which brought smiles and laughter to the faces of many!

While the week came to an end on the 13th Oct, the focus on positivity and good mental health is kept very high on the agenda throughout the school year by the Amber Flag Committee who organise various initiatives during the year. 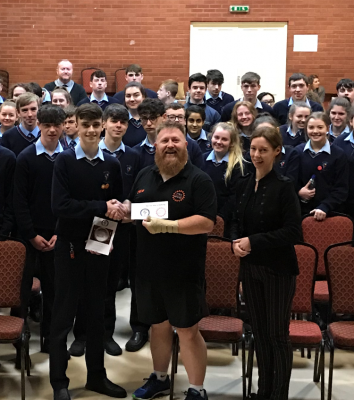 Christy Bannon Cycle Against Suicide ambassador who spoke to 3rd Years on ridding society of the stigma around mental health. He is seen here receiving a cheque for €650, proceeds of a cookbook developed by 5th Year student, Conor Brady. Also in the photo is Ms Grace Duffy, Our Lady’s Chaplain. 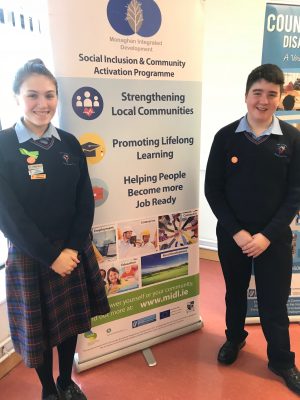 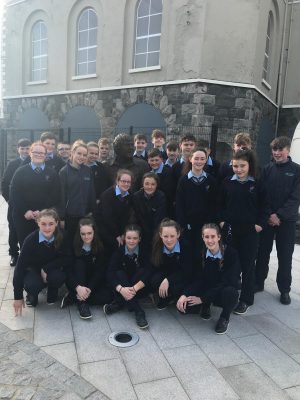