On Friday 27th April staff, students and guests gathered in Presentation Secondary School, Ballingarry for the annual Prize Day Award Ceremony. Principal, Mrs. Angela Cahill welcomed guest speaker, John O’ Shaughnessy, Managing Director of Clancy Construction, former staff members, including former Principal Sr. Patricia, prize winners, their families, distinguished guests, students and staff. In her opening address Ms. Cahill highlighted how this ceremony “commemorates traditions and values held dear by our Foundress Venerable Nano Nagle.” Ms. Cahill spoke of the responsibility of all our students to reach their full potential no matter what challenges face them and to use their many talents to make a difference. Mrs Cahill highlighted how “this ceremony celebrates our students and their achievements.” She went on to stress how success does not come by accident but is instead the product of a great deal of hard work, nurture, care and the dedication offered by the many partners of the school community. Firstly, she acknowledged The Board of Management for their unstinting commitment. Next, Ms. Cahill commended the Parent’s council for their continued hard work. Thirdly, she thanked the students for the positive contribution they make to the school and expressed her pride in their capacity to be such hardworking, decent compassionate individuals. Finally Ms. Cahill acknowledged the “tireless commitment” of the teaching and support staff whose genuine concern for the students was she said, “second to none.” Ms. Cahill went on to congratulate all who participated in the recent very successful “Lip Sync Battle.” She added “This event brought school and parish together and the fun and enjoyment made the weekly trips to rehearsals more than worthwhile.” Ms Cahill then introduced Mr. John O ‘Shaughnessy.

From the moment John addressed the group of students, parents and staff, he had them hooked by asking them to consider four very interesting questions. Firstly, he asked if any of the student body were considering a career that would give them the opportunity to move from being an apprentice or graduate to the Board Room. Secondly, he asked if any of them wanted a career that would give them the opportunity to build their own business, his third question asked if any of them considered pursuing a career that would give them the opportunity to travel the world while his final question invited them to consider a career that would give them skills that were transferable. While students might not have raised their hands, many agreed that their answer had been a resounding “yes” to all four questions. What made these questions so authentic was that John himself has travelled the road from apprentice, to engineer’s assistant, to Site Manager to Contracts Manager. It was in 2003 that John was appointed to the Board of Directors of Clancy Construction and in 2013 was appointed Managing Director of the Company. John assured all those gathered that these steps did not happen by chance nor did he “just get lucky.” In a very powerful testimony to hard work and commitment, John shared how setting goals has helped him to be “the best that he can be.” He recalled how at the age of thirteen when chatting with a friend, unbeknown to himself at the time, he voiced his first three goals in life, to get married, have a family and drive a nice car. John now enjoys having achieved these important goals but he reminded the students that to achieve their goals, they must be ready to “step outside their comfort zone.”

John’s success is not limited to the Board Room as he is also an accomplished athlete having completed a number of marathons both at home and abroad. He applies the same principles to his training as he does to his career, “I set goals and get outside my comfort zone.” John’s presentation was supported by a three short video clips of young men and women who shared some of the many opportunities that are available in the construction industry but it was the final clip of the day which showed the inspirational story of Dick and Rick Hoyt, father and son pushing themselves to the limits to truly see what they are made of that left everyone in no doubt that if we truly believe we can, then nothing is impossible.

Following on from this inspirational address were the class awards which were presented by Deputy Principal Mr. Gerry Dowling.

Abaigeal Maher and Aiden Mullally were presented with a plaque by John O’ Shaughnessy in appreciation of their hard work in their position as Head Boy and Head Girl. Mrs. Cahill thanked them for their leadership and for being exemplary ambassadors for the school.

Certificates were presented to all members of the student council.

Head of the PE Department Mr. Brian Moran introduced the sports awards and praised all the sports people within the school and thanked them for their participation and congratulated them on their success. Ms Harding spoke with pride of the students impressive wins in track and field this year.

Senior Hurler of the Year 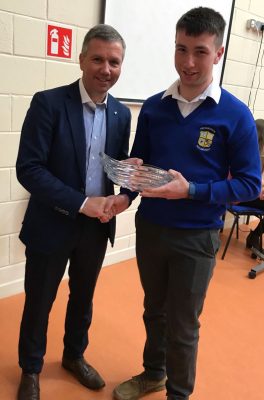 Junior hurler of the Year

1st year Hurler of the Year

Camogie player of the year:

Junior Basketball player of the Year

Junior Ladies footballer of the Year

Athlete of the Year

Football player of the Year

Senior Sportsperson of the Year

The Senior Sportsperson of the year award was this year presented to Caoimhe Ryan who in the words of Mr. Brian Moran “possesses all the qualities and attributes of a top sportsperson.

Medals were presented to the U14 victorious panel from last year:

This award is given to the student or students who received the highest results in State Exams in Irish.

THE JOE GOLDSBORO AWARD FOR INSPIRATION

Conor Clancy received this award in recognition for his positive attitude and strong commitment to achieving goals thus inspiring others.

Awarded to Abaigeal Maher for her unwavering optimism, her organizational skills, her ability to be all inclusive together with her determination to achieve. 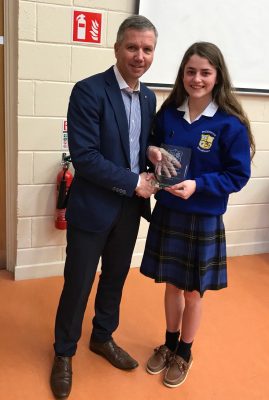 In the words of Principal Mrs. Cahill, “This award is given to the student who reflects the ethos, sense of justice, humility and empathy for others which are trademarks of our Venerable Foundress Nano Nagle” This year’s very popular recipient Katie Cleere was praised for her friendliness, her warmth and her ability to organise a parish. 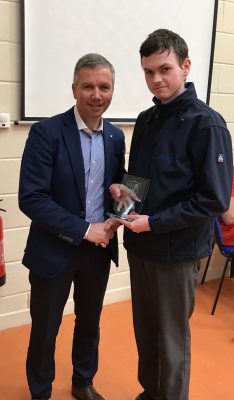 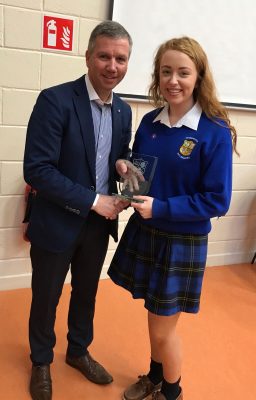 For the third year, in commemoration of great local entrepreneur and successful business man, the late Eamon Ryan, the Business Award was presented to Katie Ryan who has exhibited a flair for Business receiving grades which reflect her efforts. Eamonn’s wife Mary who taught Business in the school presented this award. 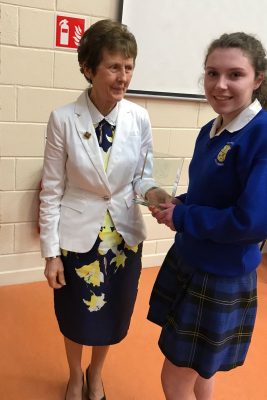 This award was presented by John O’ Shaughnessy to Patrick Walton in recognition of his participation in all aspects of school community, his determination, dependability and sense of justice.

This year’s recipient, Michael Cody who unfortunately due to other commitments could not attend the awards is currently studying Physiotherapy in UL. Ms. Cahill complimented Michael on his hard work and determination and hailed him an outstanding student.

The award for best Junior Certificate 2017 went to Anna Ryan who is currently enjoying TY. 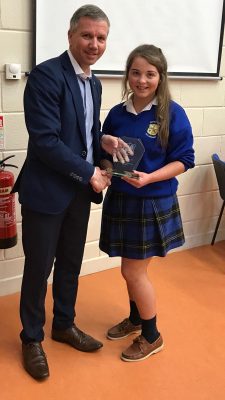 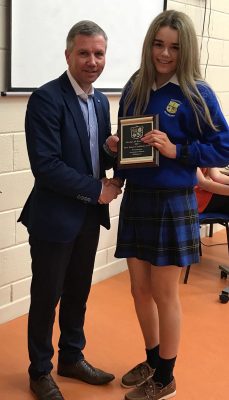 This award was presented to 6th year student Caoimhe Ryan who was recognised for her potential for greatness, her consistency in her studies and as a student who participated in every aspect of school life.

In conclusion Mrs. Cahill expressed her gratitude to the teaching staff for their assistance in selecting prize winners, the office staff for the paper work, Mr. Dowling for his support and hard work in preparing for Prize Day. In particular Mrs. Cahill thanked Guest Speak Mr. John 0’ Shaughnessy. She then called on Mr. Dowling to make a presentation to John on behalf of the school community. 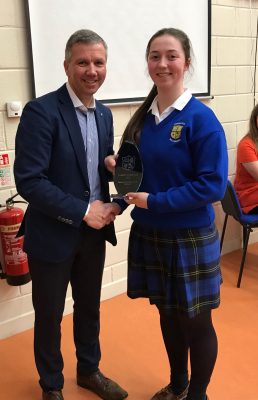