All First Years participated in a study skills workshops on Wednesday 6 November 2019 in the school library. Students were taught how their ‘amazing brains’ work. They practiced techniques and developed skills to enhance their learning in all subjects. Teachers present helped students link the material to their subject. Thanks to the Parents Council who supported the workshop. 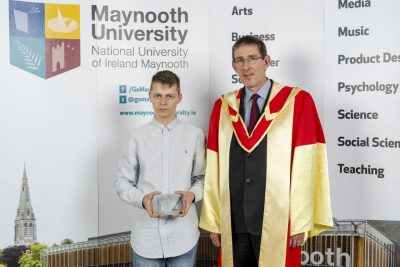 The annual Entrance Scholarship Ceremony recognised the academic achievements of almost fifty First Year students in their Leaving Certificate exams, as well as scholarships for the Bachelor of Music and Equine Business degrees.

Oliwier is a former student of Presentation College, Carlow and is currently studying Pharmaceutical & Biological Chemistry at Maynooth University. Students who achieve 550 points or more in their Leaving Certificate examinations are awarded €1,000. We would like to congratulate Oliwier on this achievement and wish him the very best in his studies and future career.

On Monday 11 November the staff and students of Presentation College opened their doors to welcome visiting primary school pupils and their parents. The annual open day is always a wonderful opportunity to showcase our school and to meet the next generation of students. On Friday of the previous week all First Year Geography students displayed their projects in the hall and their parents came in to view them. While parents were naturally most interested in their own child’s project, there was a great buzz as they walked around the hall examining projects and speaking with pupils. The prize winners were announced by Mr Murray. Matthew Hosey came First with a superb project on the Amazon Rain Forest. Sophie Cole came Second with her project on Climate Change. Sarah Glynn came Third with a project on the Water Filtration System.  Students, teachers and parents enjoyed the afternoon and students proudly brought their projects home.

Below are some photos of the Geography Projects proudly displayed by students for all open day visitors.

Presentation College Carlow had nine students, three teams taking part in the 2019 ISTA Senior Science Quiz regional finals in Carlow I.T. during Science week on Thursday evening. There were twenty three teams involved from Carlow, Kilkenny, Kildare and Laois. The students taking part were Scott Egan, Peter Dowling, Luke Drought, Fiona Butler, Julie Becker, Liam Bradley, Laura Donovan, Ellen Dempsey and Daniel Mullhall. The winning team on the night was from Presentation College Carlow and the students were Peter Dowling, Fiona Butler and Scott Egan. The students are delighted to be going to the National Finals in Trinity College College Dublin on the 23rd of November.

The full group and the winning team with teacher Ms Kinsella

Presentation, Carlow has enabled transition year students the chance to help the less fortunate by joining the Young Saint Vincent de Paul committee for five years now. On Friday the 15th of November College the committee held a launch for Young SVP to inform students that the new committee is elected. They planned a tuck-shop and a “guess how many sweets are in the jar” competition for students to come to during break. The committee thought it would be a good idea to introduce the first years to Young SVP. So, they brain-stormed ideas on how to engage the first years in an event for the launch. The committee settled on a soccer tournament and a “just dance” class.

The committee set up the event and got all the first years to choose soccer or dance, they painted a banner and a “selfie poster” and thanks to Mrs Georgina Maher, they had plenty of stock for the tuck-shop.

Fortunately, the event was a huge success thanks to the committee, the teachers and some other Transition Year students who wanted to help. The soccer tournament and the dancing was a lot of fun for the first years. The tuck-shop was extremely successful. All the proceeds from both the event, the tuck shop, and the sweet jar went towards aiding the SVP charity in its goal to defeat poverty. The committee is comprised of: Jack Curran and Caithlin O’ Carrol as Presidents. Franklyn Allison as Secretary. Doireann Broderick as Treasurer. Nessa Whelan, Darragh Reynolds, AJ Kane and Lucy Behan as P.R.O’s. Rebecca lynch, Ellie Glynn, Emma Cassidy and Aaron Smith as Photographers. The committee is extremely grateful to Ms Ann Coburn and Debbie for giving them the opportunity to run this launch. 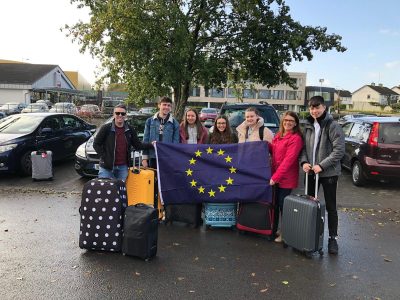 Five lucky students from Presentation College are currently spending a week in Berlin courtesy of the Goethe-Institut. Presentation College was selected to represent Ireland in a German Theatre Project earlier in the year. The title of the project is ‘Europa im Wandel’ which roughly means ‘Europe in Transition’. The other countries involved are Denmark, Finland, Scotland and Sweden. There are five students from each of these countries as well as five from Berlin participating in a week-long project culminating in a live performance in Berlin. The working language will be German. The Goethe-Institut is the organisation that promotes German throughout the world. It runs courses and its Irish headquarters and library is in Dublin.

The students involved are Charlie O’Meara, Abbie Nolan, Niamh Nolan, Doireann Broderick and Sean O’Driscoll. They have been collaborating over the past few months with their counterparts sharing videos and research. One of the tasks each country had to complete was to survey people on their attitudes to Europe. We asked ten people eight questions. Below are just three of the questions with some of the answers they received.

If you could visit three countries in Europe where would you visit and why?

How has Europe changed in your lifetime?

Where do you think Ireland fits into Europe?

On my way back from Berlin, Germany I decided to write a report on my experience taking part in the theatre workshop run by the Goethe Institute. This is how it went!

It began on a cold Tuesday morning in Berlin where the rest of the Irish team and I made our way over from the hostel to the theatre. In the theatre we took part in icebreakers. We projected to rest of the group of over thirty students from of Europe our name and where we were from. We then learnt a song in German about how we are all connected and how we are separated by nationality or borders. We then performed a flash mob where we stood holding string where we formed the shape of Europe and sung our song in front of the beautiful Branden Burg Gate.

That night we walked in the freezing cold to a Christmas market! That was extremely interesting because it was nice to see the German food and culture and be able to witness it myself!

On Wednesday we all woke up with stuffed noses and sore throats! We just weren’t able to handle to enormous difference in temperature! We made our way to the theatre again where we worked on script work and improvisations. One of the scripts was titled “Mall of Shame”. This scene explained the history of the mall and how it was built. We came up with an improvisation about two people discussing how they have to move to Germany for work which I think is represents Europe very well. A lot of people study or work abroad and some people have to travel and be separated from their families so this scene I believe was very relatable.

On Wednesday night we decided to go to bed early and recharge the batteries.

On Thursday we did a full run through of the show with the actors only. We tried our best to say our lines without the script in order for us to become more familiar with the lines. I found it difficult as it was not my first time having to speak German but it was first time having to perform in German.

On Thursday night we went to the Berlin Opera House and saw a magnificent production of the ballet “The Nutcracker”. It was my first time seeing a ballet and I would love to see it again.

Friday was the big day! It was the day of the performance. I was very nervous as other schools from Berlin were coming to see the show and I knew I was judged on my pronunciation and my understanding of the text. Thankfully I got through it with “an honourable and an impressive performance”

That night we all went for dinner so we could say our goodbyes to those organising the workshop and those we took part in the workshop with.

On Saturday we went to visit “Checkpoint Charlie” and the Berlin Wall. I really enjoyed this part a lot because now I had a greater understanding of the German food, culture and their history.

We flew back to Ireland on Sunday 17th with a warm welcome from all our families.

I am so happy I was given the opportunity to travel on this trip with other talented performers and I will be forever grateful to Mrs. Byrne and Mr. Doyle of Presentation College, Carlow. 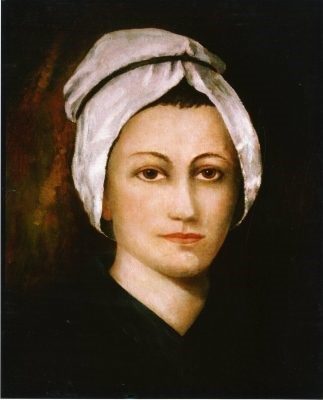 Presentation Sisters and friends of Nano Nagle, all over the world, celebrate the Feast of the Presentation of Mary in the Temple on the 21st November each year. Nano Nagle wanted to help the poor she saw around her in Cork. Determined to help to educate them, both to improve their lives and to deepen their faith, in spite of the dangers she faced because of the Penal Laws, she opened her first school in 1754 with an enrolment of thirty-five girls in a two-room cabin.

Nano taught the children during the day and visited and nursed the sick by night. As a result, she became known in Cork as the “Lady with the Lantern”. Believing that this work must be continued after her death, Nano founded the congregation now known as the Presentation Sisters in 1775.

Nano Nagle responded to the needs of her time by setting up schools and developing a curriculum that catered for the needs of her students. Today, Presentation College, Carlow endeavours to respond to the needs of its students. Today, Presentation College is a co-educational voluntary Catholic secondary school which caters for pupils of all religions and backgrounds. We aim to provide our pupils with an education that equips them for life and living in the modern world.

On Presentation Day students and staff participated in a wonderful mass organised by the Religion and Music departments. Students were involved in all aspects of the mass. Head Girl –  Meadhbh Broderick and Head Boy – Charlie O’Meara welcomed everyone to Askea Church. 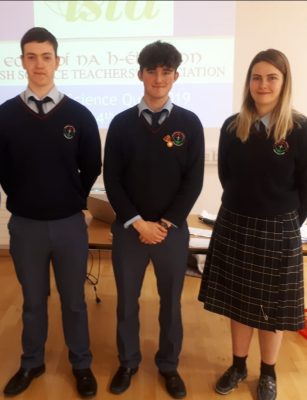 Three students represented Presentation College in the ISTA Science Quiz in the Biomedical Institute in Trinity College at the weekend. Scott Egan, Peter Dowling and Fiona Butler represented themselves and their school very well. They came in the top ten. Ms Kinsella accompanied the students and they were congratulated by Principal Mr Murray, who also travelled to the event.

Outside each classrooms is a small poster indicating what and where the classroom teacher studied. Students are always amazed at the varied options and pathways into teaching. On our staff we have teachers who qualified and worked in other areas before deciding to become a teacher. This expertise and experience is of great benefit to the students and the school.

On Tuesday Fifth and Sixth Years visited the Dolmon for the Careers Seminar.  This was both informative and enjoyable.

On Thursday all teachers spent the last fifteen minutes before break talking to students about their own college experience. The topics included what the teacher had studied and where, their experiences of college, as well as tips and advice around college life, tutorials, choosing modules and assignments and exams. This happens each year.

On Friday our Transition Year students were brought to WIT to learn about the facilities at the college. 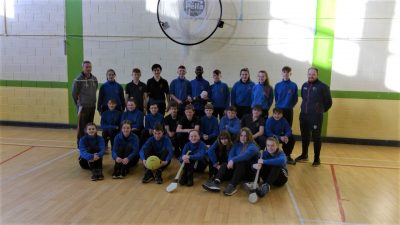 Brendan Hayden and Damien Jordan, Carlow GAA Development Officers have introduced the Super Games program to some of the Second Year PE classes. This involved Strength and Conditioning, Pella and Hurling.