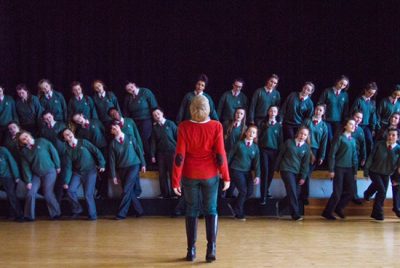 Oiche Nollaig na mBan, which was based on the Sean O Riordan poem of the same name, opened the Cork Film Festival on Friday 11th November.

They were singing Fuinneamh, a piece of music which was commissioned for the choir.

Oonagh liked the music and came up with the idea of the short film.

The film was shot on school grounds last year, and in Fota.

The girls were very excited to take part in a film and are absolutely over the moon that it has won, Best Short Film in the International Cork Film Festival.

Fuinneamh is also the sound track to the film.

(Thanks to Nicola Barrett, School Prinicpal, for sharing the above article and photo with CEIST).