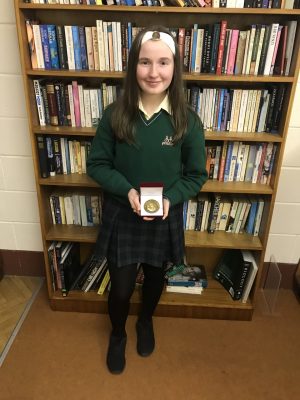 When we were given the opportunity in to take part in the Pope John Paul II Awards I was delighted as I really wanted to get involved in the church again. One Sunday at mass I thought the music was beautiful, and as the musicians were playing traditional Irish music, I immediately thought I might be able to join since I play the concertina and the harp. I made some enquiries and joined the group and ever since I have felt more included in the church. I cherish the opportunity to play on a regular basis and hope to continue playing now that I have started my Leaving Cert journey.

I had many positive experiences during my time participating in the Pope John Paul II Awards, but my standout positive would have to be playing for a group of Chernobyl visitors and their respective host families. I was fortunate enough to be playing for them as a member of “The Rolling Waves” band. We provided the music on the night while Daithí Gallagher taught the Chernobyl visitors some set dances. The smiles and laughter were truly indescribable when they were both listening and dancing. The joy that they felt at the time shone through everyone. I especially loved the way that nobody was left out. They were all hugging, laughing, smiling, dancing and clapping together. Even those in wheelchairs – their hosts took them out of their wheelchairs and danced with them as they really wanted to give it a try. I learned a big lesson from this positive experience: appreciate what you have and how fortunate you are to have such a loving family. The Chernobyl visitors loved themselves and each other for what they are and didn’t see any difference from one person to the next.