The continued development of Scoil Mhuire

It was a very busy summer for Scoil Mhuire with the scaffolding being erected for building works starting immediately after the Leaving Cert ended in June.

Scoil Mhuire was 1 of 5 schools (along with St. Orans NS, Cockhill) selected for a pilot project run in conjunction with the Sustainable Energy Authority of Ireland and Department of Education and Skills. The project aim was to make the school more energy efficient with the use of sustainable energy sources.

The school has benefited from a newly insulated roof on the 3rd floor of the main building, LED lighting throughout the entire school and the conversion of heating from oil to gas. Additionally, the school had secured funding under the DES Summer Works’ programme for a brand new Home Economics kitchen.

Our Board of Management undertook a small pilot project on external insulation for part of the main building.  The energy efficiency of this project will be monitored with a view to expanding it to other parts of the school. As part of the ongoing works, the Board of Management undertook private projects which involved external insulation for part of the main building, refurbishing the 3rd floor, enhancing the PE changing facilities, purchasing new equipment for various classrooms and improving the fencing on the grounds.   Principal, Ms Rosaleen Grant is very pleased with the announcement of Ms Lorna Barron as the second Deputy Principal, a new DES post allocated by the Department due to increasing enrolment and builds on the success of the newly established middle management structure in Scoil Mhuire.   Last year, we were selected as a pilot school to introduce PE as a Leaving Cert subject and this year, we have been selected as a pilot school for the introduction of coding at Junior level. In September, we recently opened a second ASD room and expanded our moderate class and are now awaiting funding from the DES to build a Special Educational Needs Base.   We have also applied for new Science labs and new teaching accommodation as the numbers continues to expand.  The school will be 85 years old this year and our mission is the to continue the strong work ethic and vision instilled by the Mercy sisters in the provision of a broad and balanced, holistic education to all the students under the care.  None of this would be possible without the dedication and commitment of the hard-working Scoil Mhuire staff.  Principal Grant wants to paid tribute to all contractors under the guidance of the Ponsonby Brothers for getting the work completed to such an excellent standard in such a short time frame.  We look forward to a very industrious, productive and successful school year for all the students on our care.

Scoil Mhuire students, Rory Coleman and Rachel Fletcher who will competed in the national Sci-Fest final in Dublin in November being interviewed about their project –

Our Scifest project was titled “A solar powered solution for the aquaponic growth of leafy crops in developing countries”. The project was based on aquaponics. This is a system of agriculture in which the waste produced from aquatic creatures supplies nutrients for plants grown in water. In our project we grew spinach. We germinated two varieties of spinach seeds in pots of soil for thirteen days. We then placed three seedlings in a plant pot of soil, three in an aquaponic system and three in an aquaponic system without fish. The aquaponic system consists of a polystyrene sheet with a hole cut in the centre and a plant pot placed in the centre. Holes are poked through the bottom of the pot and the spinach seedlings are threaded through them. Gravel is then placed in the pot as a growth medium and to keep the seedlings in place. This polystyrene sheet is then placed on top of a fish tank, containing goldfish. The roots of the spinach seedlings dangle into the water. When the goldfish excrete into the water, ammonia is released and this is absorbed by the spinach roots in the form of nitrates. These nitrates are much needed nutrients for the plants and therefore the aquaponic system helps the spinach to grow better.

In our experiment we planted, as said above, three seedlings in three different mediums. We measured each of these seedlings on the 14th day, when they were transferred to their respective mediums, and then measured their height each day. We did this for a further 20 days (making the total growing time 34 days). We then calculated the total growth of each from day 14-34. We repeated this experiment twice for each variety of spinach, making 4 total batches and 36 seedlings in total.

We think that this system that we have created could be used in developing countries such as Ethiopia. All of the items needed to set up the system are accessible in Ethiopia, as told to us by Patsy Toland, formerly of Self Help Africa. Soil erosion in developing countries means that the top layer of the soil is destroyed and it is therefore very unfertile. However, our system does not require soil, as the nutrients come from the fish waste. This means that the levels of soil infertility in the area do not matter.

Congratulations to Jemma Davis TY and Joseph Barber 6th year who have both been highly commended in the Patrick Kavanagh National Poetry Writing Competition. Jemma and Joseph will now travel to Monaghan at the end of the month to receive their recognition. Well done. 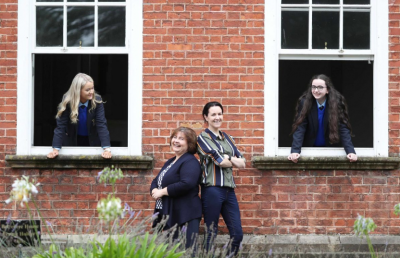 Click below to view full aritcle from Donegal Daily