Congratulations to the Scoil Mhuire Performing Arts Group and their music teacher Mr Mícheál Kerr on qualifying for this year’s national final of Waltons Music for Schools Competition. 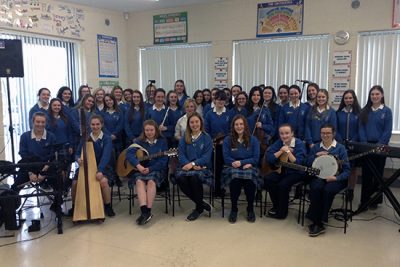 This is Scoil Mhuire’s third year to qualify for the final of this prestigious competition. Last year, Scoil Mhuire were awarded second place in the competition. This year, the 40 students, along with Mr Kerr, have compiled a musical piece, titled “Music makes us Stronger” which focuses on the stigma and borders that surround mental health and how music can help break down these borders. This is a huge honour for Scoil Mhuire to get through to the final as the competition is open to all schools across Ireland.

The final will take place on May 2nd in the National Concert Hall in Dublin, where Scoil Mhuire will compete against five other post-primary schools. Their qualifying audition video can be viewed on YouTube by searching “Scoil Mhuire 2017 Waltons”.

We wish the students and Mr Kerr the very best of luck as they prepare for the final over the coming weeks.