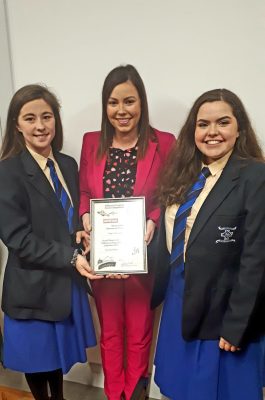 St.Brigids were delighted to be awarded “Best School Project” in this year’s “Killarney Looking Good” awards ceremony for our project “5 days 5 new ways”. This project encouraged students to walk/cycle/park and stride to school in order to help our environment.

TY students at St Brigid’s Secondary school, Killarney are working with St Vincent De Paul to create awareness of homelessness and to raise funds and resources for such a worthy cause. As of September 2019, there were 10,397 people homeless across Ireland. This figure includes adults and children. The number of homeless families has increased by 354% since September 2014.  TY students, with your help, want to help to make a small difference to the homeless women and children of Kerry. Students will be collecting “Dignity Packs” for the month of November to give to those who really need them over Christmas. The girls will also be holding a sponsored “Sleep-Out” in December to raise money.

A dignity box is a pack filled with essential hygiene items which we take for granted every day. Items being collected are: Sanitary pads, hairbrush, hair ties, hats, plasters, wipes, deodorant, lip balm, toothbrush, face cloth/wash, fluffy socks - this list is suggestive but not endless.

If anyone would like to donate, we would be very grateful for any donations you can give. You can contact a member of staff on shoran@sbk.ie or feel free to drop them to the school office on New Street, Killarney.

Four students from St. Brigid’s attended Comhairle na nÓg today. The Department of Children and Youth Affairs oversees Comhairle na nÓg, the delivery of which is the responsibility of each Local Authority. There are 31 Comhairlí na nÓg nationally and the aim is to ensure that the voice of young people is heard when developing policy and local services. Kerry County Council works with the Kerry Diocesan Youth Service to ensure the success of this project at local level. Young people aged 12-18 were invited to participate in the AGM. Facilitated workshops will took place where those present identified and worked on issues of importance to them before agreeing the next steps of working with key local decisions-makers. One of the objectives was to raise awareness around how people can influence policy decisions. There was also an election process to elect young people to the Kerry Comhairle na nÓg for the next term. Those elected are afforded opportunities to attend national events and to represent young people on a number of policy making bodies both at county level and nationally. 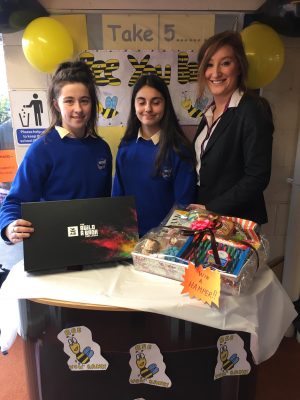 A Project by students to encourage their classmates and others to become savvy savers and learn about the importance of money has been launched this week in St. Brigid’s Secondary School Killarney.

The Transition year class has opened what they have branded as the “BEE Yourself Bank” and the big launch took place this week in the school canteen. For the launch a hampers was raffled among customers.

During the year the student bankers will hold different events to raise money for the community. The school bank will open every Monday in the school and it will welcome pupils of all ages to start saving.

The bank is part of the Build A Bank Challenge which hundreds of schools get involved in each year. At the end of the process the girls will have to present the idea behind their bank to a panel of judges in the RDS Dublin in March. It’s a great to be part of the Build a Bank challenge. This initiative is a wonderful opportunity for students to broaden their horizons and get the experience of running a Bank.

Kate Nash feargal Quinn junior and aine o Connor
Massive congratulations to our past St. Brigid’s students, Aine O’Connor and Kate Nash who were presented with the Feargal Quinn Award at the LCA National Conference this month in Athlone. Both Kate and Aine received an incredible 98% overall grade which is a distinction in LCA. The LCANA “Feargal Quinn Awards” are presented each year to those students who obtain the top credits in the LCA programme. The awards are named after the late Senator Feargal Quinn, who was the first Chairman of the steering Committee for the LCA programme. It was he who oversaw the rolling out of the LCA, the embedding of it in the Irish Education system and he oversaw its continuing development in the following years.

Pictured below are Aine and Kate with their families and also with John Lonergan. 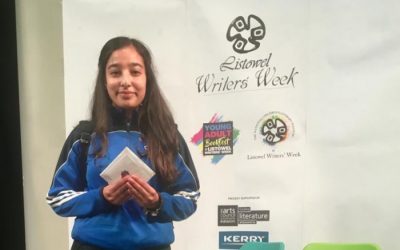 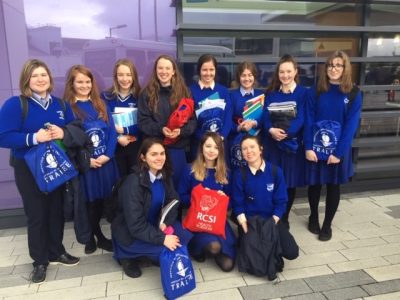 St Brigids students went to the Career Fair in Tralee IT. All colleges and universities were well represented and spoke to the student of the courses they had to offer. The students also saw the excellent facilities that Tralee IT have to offer. 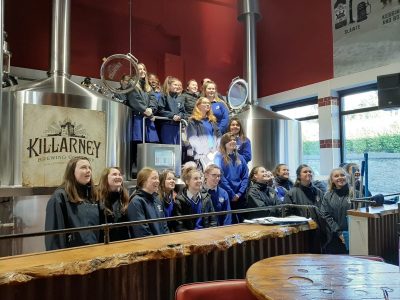 Science Week 2019 took place across the country from 11-18th November. Science students in St Brigid’s undertook a number of activities to celebrate the event.

First and Third Years took part in table quizzes organised by TY, where they pooled their knowledge of Physics, Chemistry, Biology and Earth & Space to try to clinch one of the top places.

Second years were involved in a Science-based Scavenger Hunt in the National Park. This involved using science skills such as measuring pH, speed, temperature and hardness of water, as well as finding a variety of leaves, seeds and other items.

Fifth year students visited Killarney Brewing Company and were given a presentation by Colm Casey, an apprentice brewer, who gave  a very informative talk on fermentation and anaerobic respiration. We’d like to thank Colm for taking the time out of his day to talk to us and share his knowledge.

Our Senior Science quiz teams of Niamh Coffey, Sadie Myers, Abby O’Leary, Sophie Vousden, Aisling Reidy and Ema Monsur represented us well as the ISTA Science Quiz in IT Tralee and were unlucky to not take one of the top places. Thanks for representing St Brigid’s girls!

A quiz on famous Irish Scientists and important Irish scientific discoveries was completed by many students during the week also, and winners will be announced shortly. 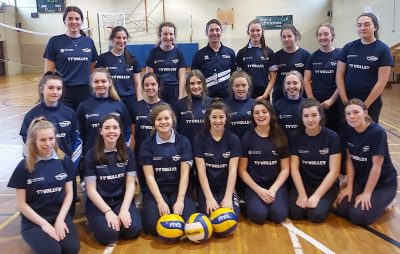 20 TY students from St Brigids Killarney completed a Spikeball coaching course in St Brigids Killarney. The course was given by Conor Flood from Volleyball Ireland. The girls must now complete 6 weeks coaching to both primary and first year students and organise a tournament at the end of the 6 weeks. The girls really enjoyed the course and look forward to the coaching 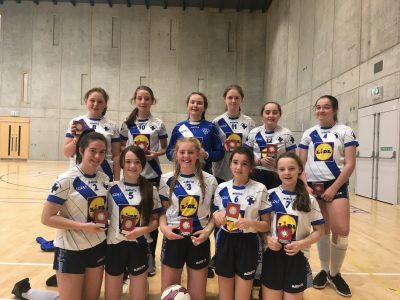 St. Brigid’s Presentation Secondary School First Year Girls competed in the Munster Futsal Finals held at the impressive Waterford IT Arena last Tuesday, 19th November. Futsal is played indoor, it’s 5-a-side and is very similar to indoor soccer, the main differences being that it’s played with a heavier football, there are ‘kick-ins’ instead of ‘throw-ins’ and the offside rule only applies at ‘kick-off’.

St. Brigid’s Presentation had won the Kerry Finals in October and were therefore representing Kerry and were up against the winners of the other five counties in Munster. The format on the day was that each team played five games (every team played each other once) and whichever team topped the league table after playing all games – would be crowned Munster champions.

St. Brigid’s got off to a fairly sluggish start against Clare, they dominated the game throughout but found it very difficult to break the deadlock due mainly to the heroics of the Clare goalkeeper, eventually managing to win by the narrowest of margins of 1-0.

The second game was against a very strong Tipperary side, represented by Presentation Secondary School Thurles, who took the lead 1-0 early on and went on to fiercely defend that narrowest of leads for the rest of the game. Despite having plenty of possession, St. Brigid’s were afforded very few scoring opportunities by the Tipperary champions and just could not score that all elusive equalising goal. The game ended 1-0 and as Tipperary had won all of their games up to that point, the Killarney side would now need Tipperary to make a slip up or two!

The Killarney girls would go on to play some really outstanding soccer and win all of their last three games, against Cork (1-0), Waterford (2-1) and Limerick (3-1) respectively, to move top of the table. Just to make it all a bit more nerve racking for everyone concerned, the Limerick champions managed to inflict a surprise 2-1 defeat on Tipperary in their second last game and so, Tipperary then had to win their last game against the local Waterford City team in order to join St. Brigid’s at the top of the table.

A draw between Tipperary and Waterford in the last game would have been enough to see St. Brigid’s crowned Munster champions. But unfortunately it was not to be, as despite the best efforts of the Waterford side, who kept the game scoreless up until the last 3 minutes, eventually succumbed to two late Tipperary goals to move them joint first place on the table with St. Brigid’s, both with 12 points each (4 wins and 1 loss each).

Cruelly, but in accordance with the competition rules, there was not to be a final, or no second chance for the Killarney girls to take on Tipperary, and so, Presentation Secondary School, Thurles were crowned Munster champions by virtue of having won the head to head (1-0) against the Kerry champions, earlier that day. St. Brigid’s finished in 2nd place overall and received runners-up medals.

All of the girls can be very proud of their performance on the day and they can now confidently look forward to heading outdoors for the 11-a-side Shannonside School Girls League and the Munster School Girls Cup, both starting in the New Year. 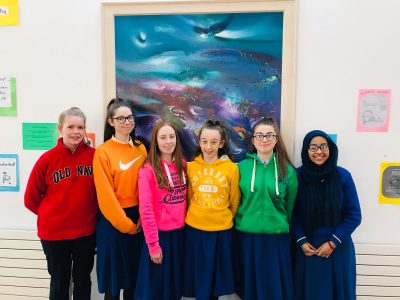 In a recent survey over 70% of students reported that they do not feel safe within the school environment. Mindful of this St Brigid’s fully supports LGBTQI+ awareness. We are an inclusive environment where the wellbeing of every student is of paramount importance.