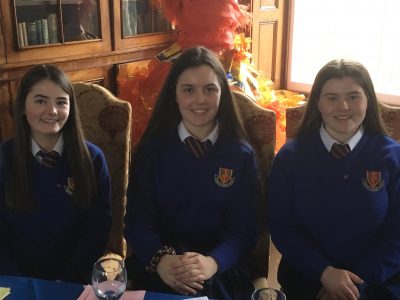 St. Vincent’s debating and public speaking team are set to bring their rhetorical prowess to the stage yet again with their forthcoming performance in the Leinster final of the Knights of St. Columbanus public speaking competition. The culmination of several months hard work, the girls clinched their place at the event in Dublin after a rousing speech on the abolition of the death penalty. Under the guidance of their teacher Victoria O’Hagan, Leah O’Shaughnessy, Gillian Fearon and Doireann Minford hope that their powerful message calling for the execution of justice, not people, will see them bring home the gold!

Indeed this is the second time this year that St. Vincent’s  have reached such lofty heights, with Emma Connolly being selected from hundreds nationally to perform at the Mansion House to commemorate 100 years since the sitting of the revolutionary first Dail in January 1919. Adding to an impressive haul of awards that over the years have included several national titles in the European Commission Soap Box competition, the Action Aid public speaking competition and three national Debating Science awards, this year  St. Vincent’s have also seen Queensley Odidi take home the Soroptimist perpetual trophy for excellence in communication and public speaking. On the forthcoming final in which the students demonstrate how they have found a language for their faith, Victoria added ‘The girls have worked tirelessly in their preparation on this complex and emotive topic and I want to wish them the very best of luck in the final.’