Last year in Ardscoil Mhuire, a class of Transition Year students, through their participation in the Young Social Innovators programme, launched their Sexting: Get the Message #keepitpg Campaign.  These students had a hugely positive response to their project, working in collaboration with national initiatives such as the Young Social Innovators, Webwise, and An Garda Síochána.  Through the distribution of their informative bookmarks, passionate speak-outs, and social media awareness campaign, they highlighted the dangers of sexting through a legal and social lens.  These students have been recognised for their work on a national level, having been awarded the Young Social Innovators of the Year 2017/18 Gold Prize, as well as winning the Webwise Safer Internet Day 2018 #BeInCtrl Photo Competition, and are also recipients of a Garda Youth Award.

The hard work of these students, who are now in 5th Year, payed off on the 9th of January when three members of the team (Erin Barrett, Sarah McDarby, and Kerri O’Dwyer) were invited to brief Garda Commissioner Drew Harris about their project. They were also given the opportunity to discuss their proposed protocol for Gardai in relation to this troubling epidemic. Currently, there is no protocol in place for Gardai to follow when instances of sexting are reported- responses may change from station from station. The students are lobbying for the implementation of a unified national response in relation to sexting which can be utilised when such cases are brought to the attention of the Gardai.

Although the students were definitely nervous, Commissioner Harris was very friendly and supportive of their project. He seemed highly interested in their proposals and made plans for their continued partnership through the newly formed Garda Youth Scheme. The students are excited to continue to liaise with the gardai and avail of their generous support and advice.

The students meeting with the Garda Commissioner was also covered by Nationwide as part of a special Young Social Innovators’ episode. Presenter Anne Cassin interviewed members of the team about the #keepitpg initiative and Ardscoil Mhuire look forward to this episode being aired in April!

Congratulations to Fifth Year Ardscoil Mhuire student Therese Houghton on winning the national ‘Richard Burke TY Personified Award’ for 2018 on Thursday the 15th of November at the Zeminar event in Dublin.

This prestigious award aims to identify the student who best represents the mission and aims of Transition Year and who has been proactive in fulfilling their own potential by; demonstrating personal development, including social awareness and increased social competence; demonstrably increasing their skills base; and participating in work experience successfully – proving themselves capable of planning to work and participating in the work place.

Therese’s full and enthusiastic participation in Ardscoil Mhuire’s Transition Year programme, as well as national initiatives such as Junk Kouture, the Young Social Innovators, Webwise Ireland, and the Concern Worldwide Debates (to name but a few), saw her emerge from a rigorous judging process as the eventual winner of the award.

We are incredibly proud of Therese on her accomplishment, and even prouder to have had two of our students vying for this national award. Congratulations are also due to Erin Barrett, who was nominated in recognition of her achievements as a Transition Year student last year.

A huge thank you to all in our school community who support our Transition Year students in all of their endeavours. 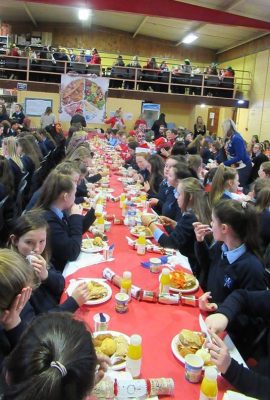 Our annual whole-school Christmas Dinner is always a wonderful opportunity for our entire school community to gather, bond and enjoy the company, comedy, and cuisine that are now true ASM hallmarks. Our staff and students are incredibly grateful to all those who work so hard to make this special event a reality every year.

A tribute to the whole staff of the school, who work so diligently both inside and outside the classroom throughout the year, is evidenced by feedback from past pupils. One of their treasured memories of school days in Ardscoil Mhuire is the unforgettable experience of sitting down as a group to enjoy a sumptuous meal together.

In the midst of our schools Christmas Exams, Ardscoil Mhuire was delighted to be represented at a very special event at the Woodlands House Hotel.  Two groups of our senior students, as well as one past student, were honoured with Limerick Garda Youth Awards in recognition of their ongoing work and accomplishments.

These awards aim to honour young people who have made a significant contribution in their local community.

Currently studying for their Leaving Certificate, members of The S Test team were acknowledged for their incredibly valuable work on the area of consent and the promotion of responsible sexual behaviour.

The #KeepItPG team, now in Fifth Year, were also worthy recipients of an award in recognition of their Young Social Innovators’ Gold Prize winning campaign to tackle sexting and the law around the sharing of sexually explicit images by teenagers.

Jade Purcell, from the graduating class of 2018, also saw her achievements in volunteerism and promoting access to music celebrated.

Congratulations to all of the young people who received awards and to the families, friends, schools, and other organisations that support them!  The future is surely in good hands.

Ardscoil Mhuire’s school choir has been very active this term. The choir not only sang beautifully for Mercy Day mass which was celebrated by Fr Harmon but also preformed next to the live crib at the school craft fair on the 7th of December. Ardscoil Mhuire’s school choir were once again delighted to be invited to perform at a very special event, St Mary’s Church Choral Recital, on the 13th of December. Our school choir, who represented us so well on the night by singing beautifully, were directed by Ms Nolan and accompanied by Ms Curley on the piano. On the 16th of December our students also sang in the Crescent Shopping Centre from 4pm and 6pm. The aim of this event was to raise money for the poor of Limerick. Ardscoil Mhuire’s students, parents, staff and retired staff raised €1000 and this money was presented to Michael Murphy from St Vincent De Paul on the 18st of December. A special thank you to Ms Hynan, Ms Nolan and Ms Curley for all their hard work in organising this charity event.